Your electronic typo spotter is only as good as your proofreading skills – which is not always a good thing in the business of sound reputation management.

Spell check’s chirpy confirmation of a job well done must surely signal a mere formality: the last, if crucial, thumbs-up on the winding road to emotional closure. The denouement to writing up, say, your student-research paper. Nailing that tender proposal. Typing up a Dear John or Jane Letter that bravely strives for the most balanced metrics on the emotional-intelligence scale.

After all that work, it’s only fair that your expensive word-processing software rewards you with a semblance of requisite proofing.

Lest your error spotter favours the commonly reductive approach to cleaning up your work, best you heed Comma Chameleon’s commandments for manual fault-flagging excellence.

# 1 – Thou shalt not consider spell check thy friend

Spell check may alert you to improper grammar use, niftily fix clangers as you type and almost doubtlessly make you look smarter by slashing the number of typos you’ve inflicted on your screen.

But spell check isn’t your friend. Friends don’t let friends send into a world of infinite viral possibilities egregious errata that may leave them fantasising about boarding a one-way shuttle to Mars.

Beware, especially, the professional typo people who specialise in tweeting the worst oversights of electronic proofreaders (assuming the latter were even used). Bemoaning the plight of editors everywhere, lexicographer and Twitter user Steve Kleinedler highlighted American “Sigh” Language – rather than “Sign” Language – as one of many eyesores to emerge from the hashtag #SpellCheckCannotSaveYou. Unethical “manor” happens to be the Chameleon’s favourite among these, because it evokes some kind of den of iniquity, rather than the unethical “manner” that was perhaps the author’s preferred intention.

“I can never re-read a passage too many times; there’s always something,” Kleinedler kvetches.

Bloopers produced by Spell Check and its accomplices, Autocorrect and Predictive Text, are so numerous there are whole websites – such as Damnyouautocorrect.com – dedicated to the nuclear fall-out of ignoring your scruples and/or typing too fast.

Just this week, a civil WhatsApp chat about selling some of my camping gear to the actuary upstairs went awry when his app launched into autopilot. 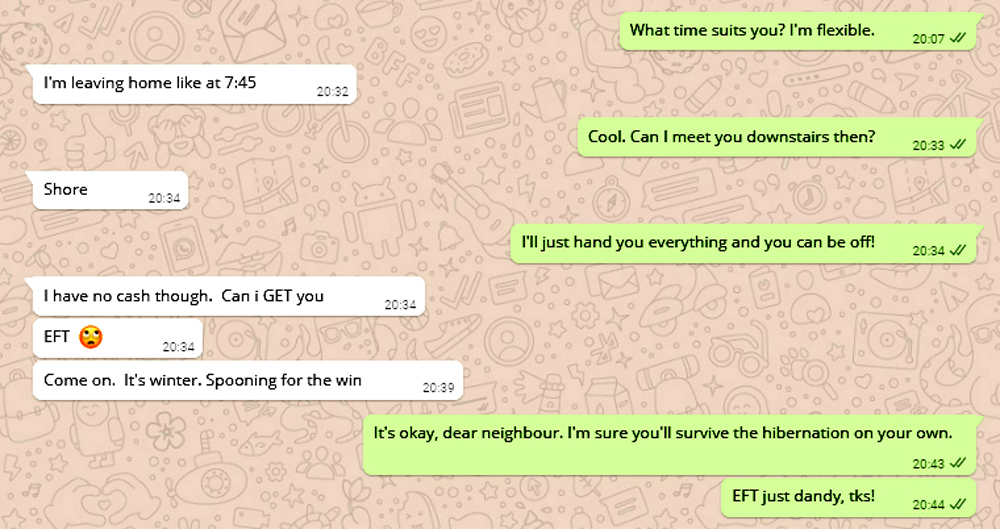 An editor friend once chanced upon the last-minute idea of replacing his name with her own while writing a carefully composed Dear John Letter. Call her an empath. She had wanted to be kind. Know what the receiving end of those sentiments would feel like.

Obviously, she wouldn’t dream of sending it like that.

But if Giddy were a horse who could sense the freedom of the open air, my friend would speed-scan it all after what one can only suppose was an amnesia-inducing coffee break. Employing the best of her caffeinated giddiness, she hovered a quivering finger over the mouse key, and released her self-addressed sentiments bolting into the horizon of irretrievable embarrassment.

‘John’, understandably, was only partially perturbed.

“Heyallgood,” he might have offered in that insouciant manner so common of this chivalry-stripped age. “But why did you keep talking to yourself?”

Spell check, even with the best of intentions, was never going to save her. She had basically broken up with herself – but, thankfully, in the nicest way possible.

Until all software becomes universally context-intelligent – that is, trawls more than just words in isolation – it may be said that spell check is probably only as good as your ability to tell your homographs from your homophones. But the definition can be confusing. The Wordsworth Dictionary of Homonyms claims that Bill Bryson’s Troublesome Words “tries hard, but is misleading, while Thomas Parrish in The Grouchy Grammarian is amusing but imprecise”. Wordsworth author David Rothwell’s offering?

Confused? Imagine how spell check, admittedly just a bot, must feel about all this – and, if you really wanted to challenge it, make it read this excerpt.

“Each frays come posed up on my screen / Eye trussed too bee a joule. / The chequer pours o’er every word / Two cheque sum spelling rule.”

The average adult will have no problem relishing the delicious ambiguity of this 1992 ode to spell check’s snags by American academic Jerrold H. Zar. Read out loud, it sounds fine – it’s even perfectly spelt, except for a trifling 14 out-of-context homonyms that render it utterly meaningless. And yet, all my mid-noughties version of Word could suggest was hyphenating “two” and “cheque”.

To help free the world from spell check’s “Good to Go” masquerade, the Chameleon suggests that you consider the following non-scientific cheat sheet of homonym-like words. In no order of public importance, they might be:

On 9 May 2018 at 3.55pm the word “public” appeared in Google News results some 63 million times (compared with “political” and “covfefe” at a piddling 27 million and 23 million times). Given the difference of a single letter, you might imagine that this word’s less-desirable substitute is an unintentional fixture in the popular press.

An otherwise fine Los Angeles Times report (April 25) paints a decidedly hirsute picture of how Trump flunky Mick Mulvaney is trying to thwart “pubic access” to a database of financial consumer complaints. The Chameleon has notified the reporter in the spirit of collegiality, but is yet to receive a response or witness a correction. However, Polity.org.za’s headline on a “wage-settlement deal by Pubic Sector Unions” confused the Chameleon with the option to “e-mail this article” rather than the writer, so we decided not to bother the article.

Similarly, Pressreader.com, a news service that delivers an “endless” trove of “thousands of top newspapers … just as they appear in print”, showcases a story boldly headlined “Pubic sector wins big”. The Pressreader cutting suspiciously indicates that the Irish Independent published this article on 2 October 2017, yet it is nowhere to be found on the newspaper’s website.

#SpellCheckCannotSaveYou produces the following gem from Fire and Fury, Michael Wolff’s 2018 exposé of the Trump administration: “[Steve] Bannon, with mounting ferocity and pubic venom, could abide them less and less every day.”

Comma Chameleon reader Owen Barrow hoards hordes of textual faux pas, such as the recent “Health and Beauty” advertisement on a classifieds website that claimed “young misuse will soothe your sore body”. Uh-huh.

“One of the drawbacks of the print-media decline is shrinking classified ads, the source of many of our treasures,” Barrow writes. “Like the ad under ‘Furniture’: ‘Chester Draws – mahogany.’ ”

Anyone with domestic-fowl phobia should know that the “poultry are getting rebellious”, thanks to a trenchant Twitter warning by Madam Grammar. Her supporting evidence is a newspaper excerpt about insurgent chickens trying to “escape their new coup”. Luckily, fire personnel were on hand to conquer the uprising. For the record, a “coop” is cage for small animals. A “coup” is a stage for uncaged humans.

You know the drill. Don’t even think about it.

Please note that this is no exhaustive list. The great spell-check wilderness is fraught with so many perils that it cannot be.

But the Chameleon assures me that you should be fine if you manually proofread your work as passionately as you scrutinise your invoices.

For more examples of scandalicious clangers and how to avoid them, visit Comma Chameleon’s launch e-mag here. Submit faux pas here with “BAD COMMA” in the subject line.

Tiara Walters writes for Daily Maverick's climate crisis unit, Our Burning Planet. A recipient of the South African National Parks environmental journalist of the year award, she's written for leading African and international publications for nearly 20 years, including the American Polar Society’s Polar Times, the Lonely Planet Guide to Antarctica and the Sunday Times. She was the first South African woman journalist to oversummer in Antarctica with the South African National Antarctic Programme. In addition to the climate crisis, she has a special interest in the illegal wildlife trade and other global conservation issues, the natural sciences as well as space sciences. Her work in broadcasting includes environmental radio and a stint as field presenter for 50/50, the SABC's long-running conservation television show. She has also contributed widely to the publishing industry as book editor and ghostwriter. Photo: www.danielrutlandmanners.com

Tiara Walters writes for Daily Maverick's climate crisis unit, Our Burning Planet. A recipient of the South African National Parks environmental journalist of the year award, she's written for leading African and international publications for nearly 20 years, including the American Polar Society’s Polar Times, the Lonely Planet Guide to Antarctica and the Sunday Times. She was the first South African woman journalist to oversummer in Antarctica with the South African National Antarctic Programme. In addition to the climate crisis, she has a special interest in the illegal wildlife trade and other global conservation issues, the natural sciences as well as space sciences. Her work in broadcasting includes environmental radio and a stint as field presenter for 50/50, the SABC's long-running conservation television show. She has also contributed widely to the publishing industry as book editor and ghostwriter. Photo: www.danielrutlandmanners.com