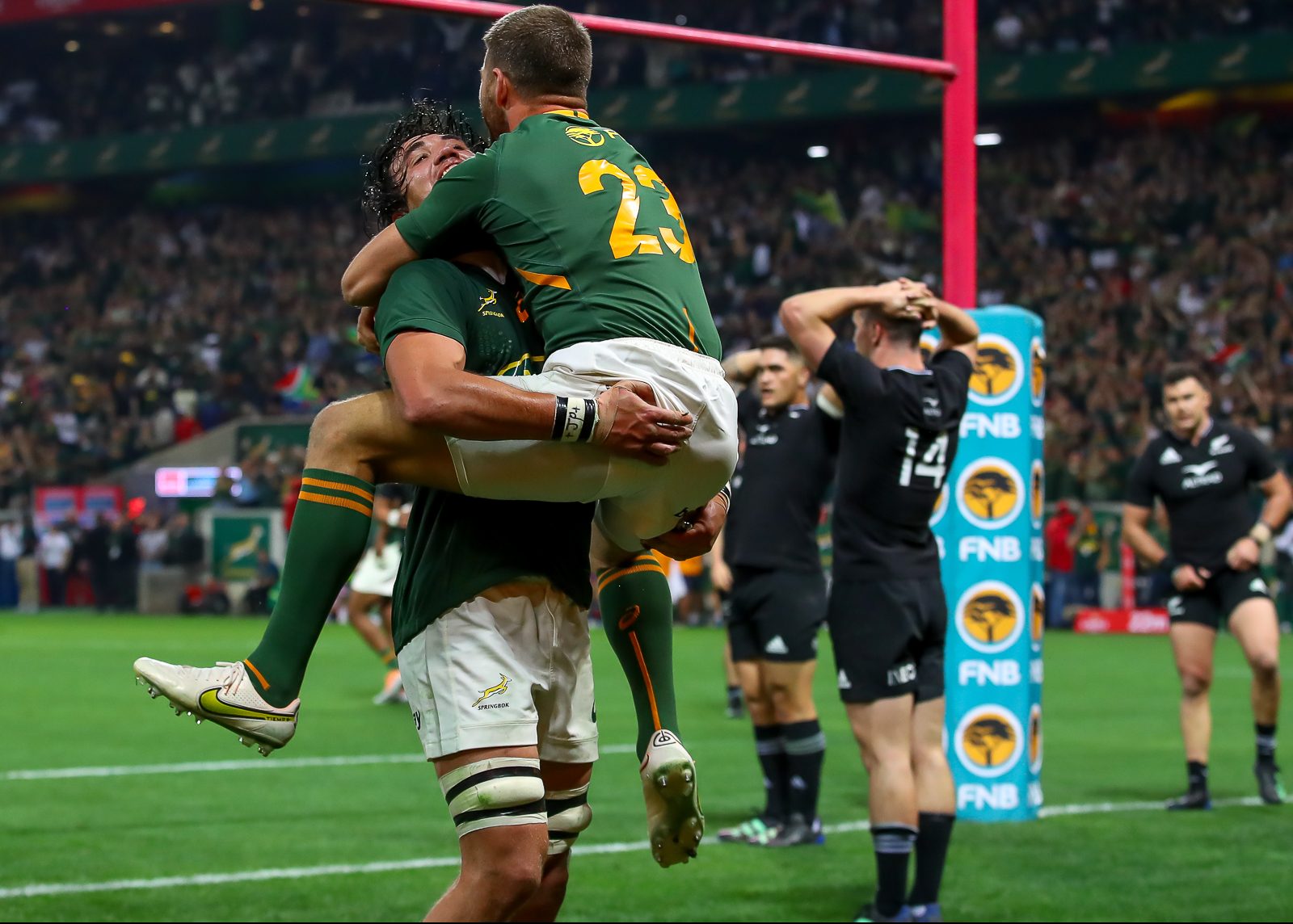 The Springboks secured a 26-10 win over the All Blacks at Mbombela Stadium to underline their world champion credentials.

Dominant, emphatic, claustrophobic and clinical. The Springboks have seldom, if ever, dominated an All Black side so comprehensively. Despite a 26-10 final scoreline, the tourists were lucky it was not a lot worse.

New Zealand hardly had any ball, they lost the aerial battle, they were destroyed on the ground and smothered when they did try to launch attacks.

All Blacks coach Ian Foster’s time in charge is now surely measured in hours, not days as his side slumped to a third consecutive defeat.

The Boks’ 16-point margin was the biggest in the professional era between the sides  and the second biggest in history.

The All Blacks will limp to Johannesburg for the second Test at Ellis Park next week, but they won’t be relishing the challenge if the outcome and performance at Mbombela was anything to go by. If the Boks were more accurate on attack, they could have scored 40 points or more.

Not even losing scrumhalf Faf de Klerk after 45 seconds derailed the Boks’ relentless display. De Klerk was knocked out when trying to tackle wing Caleb Clarke, forcing Jaden Hendrikse into the match from the start.

Boks coach Jacques Nienaber’s decision to start Hendrikse twice against Wales in July was, in retrospect, a superb move, given how this match unfolded. Had Hendrikse not received so much game time against Wales would his performance have been as good as it was at Mbombela?

Until Shannon Frizell’s 79th-minute try, after impressive wing Kurt-Lee Arendse was off the field after being red-carded for a horror tackle on flyhalf Beauden Barrett, the All Blacks never came close to scoring.

It was an unfortunate end to a superb display from Arendse, whose ability in the air was spectacular as was his general play.

South Africa’s power game was too much for this callow New Zealand side to handle. The first scrum resulted in a free kick for the Boks. The second in a penalty for the home team and from then on it just collapsed into a heap of misery for the All Blacks.

The Boks, as per the script they would have planned, took a 10-0 lead early on after a Arendse’ early try and the first of three penalties for flyhalf Handré Pollard.

New Zealand were bullied in contact and relentlessly knocked back when they did have the ball. The All Blacks had less possession and territory and made more tackles than the Boks. That has seldom been the case in the 101-year history of battles between these sides.

Bok hooker Malcolm Marx, playing his 50th Test, was colossal in every department but his breakdown work was iconic. He won two first-half breakdown penalties and created havoc every time he was near a ruck. New Zealand players will have Marx nightmares for weeks.

Pollard provided the stability with a perfect kicking display from the tee on his way to a haul of 16 points. He landed a neat drop-goal for good measure too.

But it was the forwards, who as expected, provided the platform for victory, although when the Boks do their analysis there will be room for improvement.

They lacked cutting edge on attack again and will have to reassess some options. In the first half, from turnover, centre Damian de Allende chose to kick with a three on one situation while they ran down blind alleys several more times in good positions.

But that is nit-picking because the good far outweighed the bad.

Arendse’s first-half try, after the Boks won an aerial contest before centre Lukhanyo Am offloaded to the wing for the score, underlined the match in a moment. New Zealand had no answers to the questions they knew were coming.

Other than stopping the Boks’ rolling maul, the All Blacks were not superior in any department and Willie le Roux’s last-minute try off Frizell’s knock-on was the least the Boks deserved.

Foster’s side have now lost four of their last five Tests. Ellis Park looms ominously because there was nothing in this New Zealand performance to suggest they have a way to rectify their problems in a week. They probably can’t rectify them in a month.

But take nothing away from the Springboks because this was a ruthless display from a side that wants to add consistency between World Cups.

The Boks unusually started a Test against the All Blacks as overwhelming favourites and delivered on that expectation. It was a wonderful, collective effort that showed the power of a cohesive, experienced and well-drilled unit versus a collection of talented, but directionless individuals.

The All Blacks are at a low point and the Boks are on the rise. It won’t always be this way, but for once the pressure is on the Kiwis in this old rivalry.