The All Blacks have their Boks to the wall against Sout... 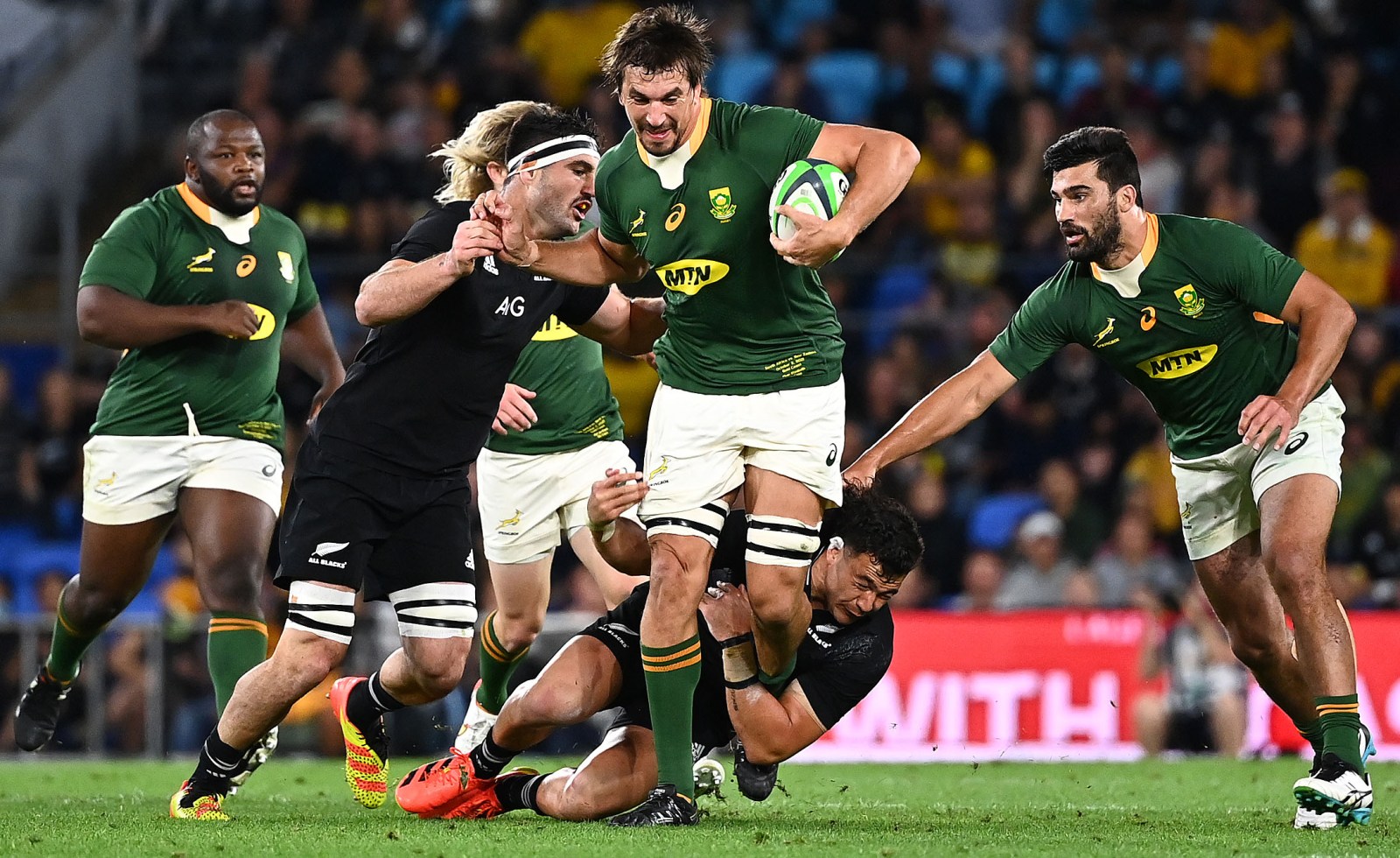 Eben Etzebeth on the charge against the All Blacks at CBus Stadium on Australia's Gold Coast on 2 October 2021. The lock will pose tough questions for the Kiwis at the lineout. (Photo: EPA-EFE / Dave Hunt)

Seldom has an All Blacks side started a Test against the Springboks as underdogs, but this weekend in Nelspruit, it is certainly the case.

In more than 300 Tests since TAB began taking bets on the outcome of All Black Tests, the Kiwis have only ever started as underdogs four times on betting odds.

And including this weekend, each of those four times the opposition has been the Springboks. In the three previous encounters when the All Blacks were not favoured, TAB’s experts or algorithms proved correct. The All Blacks lost.

So, based on that small sample, the portents are not good for the All Blacks when they face the world champions at the Mbombela Stadium on Saturday. But it didn’t need a betting company to figure that out.

The All Blacks are in unusual territory, especially this century. They are coming off a 2-1 home series defeat against Ireland and have lost four of their past five Tests. Should they lose both Tests to the Boks, and with them the Freedom Cup, they will be on a four-match losing run, which hasn’t happened since 1998.

Read more in Daily Maverick: “All Blacks angst doesn’t make them any less of a threat against the Boks”

Recent form suggests the All Blacks will struggle, but the great joy and mystery of sport is that the unexpected could happen. And honestly, the All Blacks suddenly waking from a slumber and beating the Boks would hardly be a shock.

After all, their record against South Africa is excellent. In 101 Tests between the sides, New Zealand have won 60 and the Boks 37 with four draws.

Of course, this All Blacks team is in transition. Older players such as captain Sam Cane are under pressure to reach their previous benchmark while several new faces have yet to step up to the expected standards.

Coach Ian Foster is hovering close to the exit door and news out of New Zealand suggests he will be axed if the All Blacks lose both matches on their South African tour.

For Foster though, who made four changes to the side that lost the third and deciding Test against Ireland in Wellington three weeks ago, the only focus is on this weekend. There is no point worrying about the future when the immediate challenge of the Springboks is so formidable and pressing.

Read more in Daily Maverick: “Is the lack of exposure to South Africa’s physicality behind the All Blacks’ slump?”

The main changes come in the pack where there has been an acknowledgment by Foster that their set-piece shortcomings against Ireland were the underlying cause of the shock outcome.

Samisoni Taukei’aho is named at hooker alongside props George Bower and Angus Ta’avao in a new-look front row. On the bench, props Tyrel Lomax and Ethan de Groot are named for the first time in the 2022 season, while hooker Dane Coles gets the nod over Codie Taylor.

Powerful wing Caleb Clark also returns in a clear indication that the All Blacks are aiming to up their physicality after being bullied by Ireland.

“Much has been made of the last series and we’re putting the building blocks in place in that series. Did we get everything right? No, we didn’t,” Foster said.

“We still have a lot of faith in the areas where we want to grow our game. There are tweaks in the attacks that we’re working on, with some of them highlighting some of the focus points of our game that we didn’t get right.

“It’s not a matter of bringing in 10 new things, it’s about bringing a couple in and honing two or three things that we wanted to do, but didn’t do well.

“We don’t like losing, just like everyone doesn’t like to do so. That always creates an edge in the group, along with a lot of reflection,” Foster said.

“The players are reflecting on their own roles, performances, and how they grow. I’d certainly use the word reflection and that’s created an edge.

“You dovetail that with where we are and who we are playing against, so we’ve got quite a great concoction. It’s a clear challenge for us and we’re excited by it. We want to play better and we probably know that we’ve never been a great July team.

“It’s the start of our year, just like the South Africans, and I guess we’ll be looking to improve on what we’ve shown in the first three Tests.”

Although the Boks rightly start as favourites after beating Wales 2-1 in their July series, the home side are also a long way from perfect.

The set piece purred along well against Wales, but the Boks’ attacking game was as blunt as a Gordon Ramsay put-down. The upside though was that they displayed a little more ambition on attack, even if the execution was lacking.

Kurt-Lee Arendse’s inclusion on the right wing for the injured Cheslin Kolbe indicates that the Boks want to score more tries and ask different questions of the opposition.

The safer, and more defensive option would have been to turn to Jesse Kriel, as they did on the November tour last year. But Nienaber is sending a message that despite the massive stakes against the old foe, the Boks are not ignoring development and growth completely.

Foster is expecting more, not less, from the Boks.

“I don’t see two strategies. I see one strategy where they want to play you in a number of different ways,” he said. “It’s not like they’ll play one strategy for the whole game. They’ll have two or three variations of how they’ll want to play.

As usual the contest starts and ends with the battle up front, and to that end hooker Malcolm Marx’s first start in a year is a statement of intent from Bok coach Jacques Nienaber.

Read more in Daily Maverick: “Rassie Erasmus cautions against complacency – Boks have a healthy respect for All Blacks who remain a threat”

Marx is playing his 50th Test and although Nienaber hinted it was a sentimental decision, nothing could be further from the truth. Marx, besides his basic duties, is being deployed to create chaos in the breakdown battle.

He is the most formidable and imposing presence over the ball and will be tasked with making the battle on the deck a nightmare for the tourists.

The Bok lineout will also present a huge challenge for young hooker Taukei’aho. Ireland took the All Blacks lineout apart in the third Test in particular and that would not have gone unnoticed in the Boks’s analysis centre.

With Marx and Bongi Mbonambi’s accurate throwing, Lood de Jager, Eben Etzebeth and Pieter-Steph du Toit should comfortably provide quality possession from the lineout. And when the tourists are throwing in, that trio will attack New Zealand ball at the appropriate times.

The Bok bench is also loaded with lineout firepower, with Franco Mostert and Salmaan Moerat set to maintain the pressure until the end.

In a game of fine margins, there won’t be much in it again. The Bok bench, especially among the six forwards, should prove the difference. DM