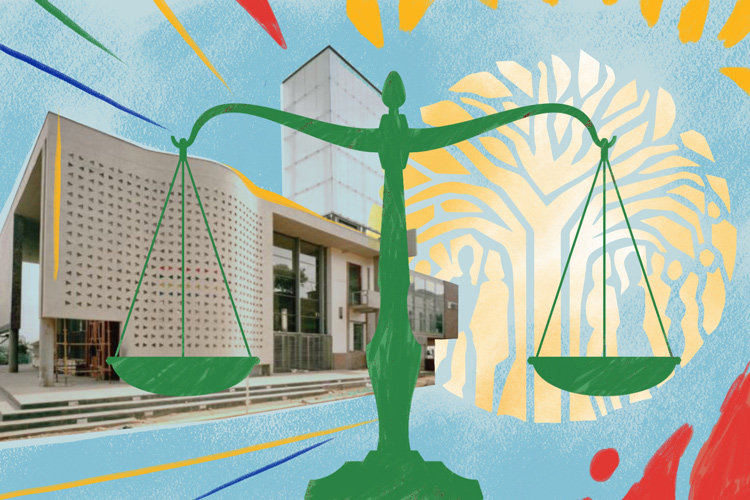 The Johannesburg Labour Court will hear an application by the National Union of Metalworkers unionist Ruth Ntlokotse that its general secretary, Irvin Jim, should be found in contempt of court. (Graphic: Lisa Nelson)

Labour Court to hear Ntlokotse’s arguments that the union’s elections were invalid and that Jim should be arrested.

The Johannesburg Labour Court will hear an urgent application from unionist Ruth Ntlokotse asking the court to find the National Union of Metalworkers of South Africa (Numsa), its general secretary, Irvin Jim, and its president, Andrew Chirwa, in contempt of court.

Ntlokotse says they disobeyed the 23 July ruling handed down by Judge Graham Moshoana that the union’s congress should not go ahead. She is seeking an order that would declare the elections and all decisions taken at the congress null and void.

She is also asking the court to authorise a warrant of arrest for Jim and Chirwa for 30 days’ imprisonment for contempt of court. Ntlokotse asks that this warrant should not be enforced as long as Jim and Chirwa comply with Moshoana’s order and the order that she is seeking in the current application.

Moshoana’s ruling, delivered days before the congress was scheduled to begin at the Cape Town International Convention Centre, found that Numsa’s central committee had violated the union’s constitution in the run-up to its national congress by suspending several members, placing a region under administration, and failing to convene a credentials committee to verify members and their representatives before the congress.

Numsa unsuccessfully tried to appeal against the ruling and then went ahead with the election of national office bearers in spite of the interdict.

Ntlokotse argues that Numsa, Jim and Chirwa showed wilful and bad faith by proceeding with the national congress.

She is asking the court to declare that the congress “was not lawfully convened” and that “all the resolutions passed thereat, including nominations and elections are invalid and of no force and effect”.

Ntlokotse argues that, even after the interdict ruled that the exclusion of Mpumalanga was unconstitutional, the congress went ahead without the region’s delegates.

She says that, despite the lifting of the suspensions, Numsa “failed to make any flight, transport and accommodation arrangements for 22 of the members who were suspended”, and says that a number of members who had been elected as representatives had also been excluded from participating. Further, some members were included as delegates as replacements for members that had been elected but subsequently suspended.

Ntlokotse argues that since the accreditation by the credentials committee only took place on the Tuesday of the congress week, the central committee should have given six months’ written notice of the congress. Instead, it proceeded the next day.

Ntlokotse also draws the court’s attention to changes to the annexures of Numsa constitution made by the central committee to redefine what suspension and accreditation mean. She says these amendments were not done in compliance with Numsa’s constitution.

In an answering affidavit, Jim claims that there is no basis for a contempt application. He says Numsa has “at all times fully complied with the judgment and order issued by Justice Moshoana on 23 July 2022”.

Jim says that a special meeting of the central committee on Tuesday 26 July “rectified all of the constitutional defects identified by Justice Moshoana”, and this meant that the congress was “free to convene” as had been planned.

Jim says that changes to the definitions in the annexure to the union’s constitution, including a requirement that delegates’ credentials be confirmed by a regional executive committee, were made within the delegated powers of the committee.

Jim asserts that with the conclusion of the work of the credentials committee, the union had met its constitutional obligations.

He asks the court to find that Ntlokotse’s application is not urgent and that it is without merit.