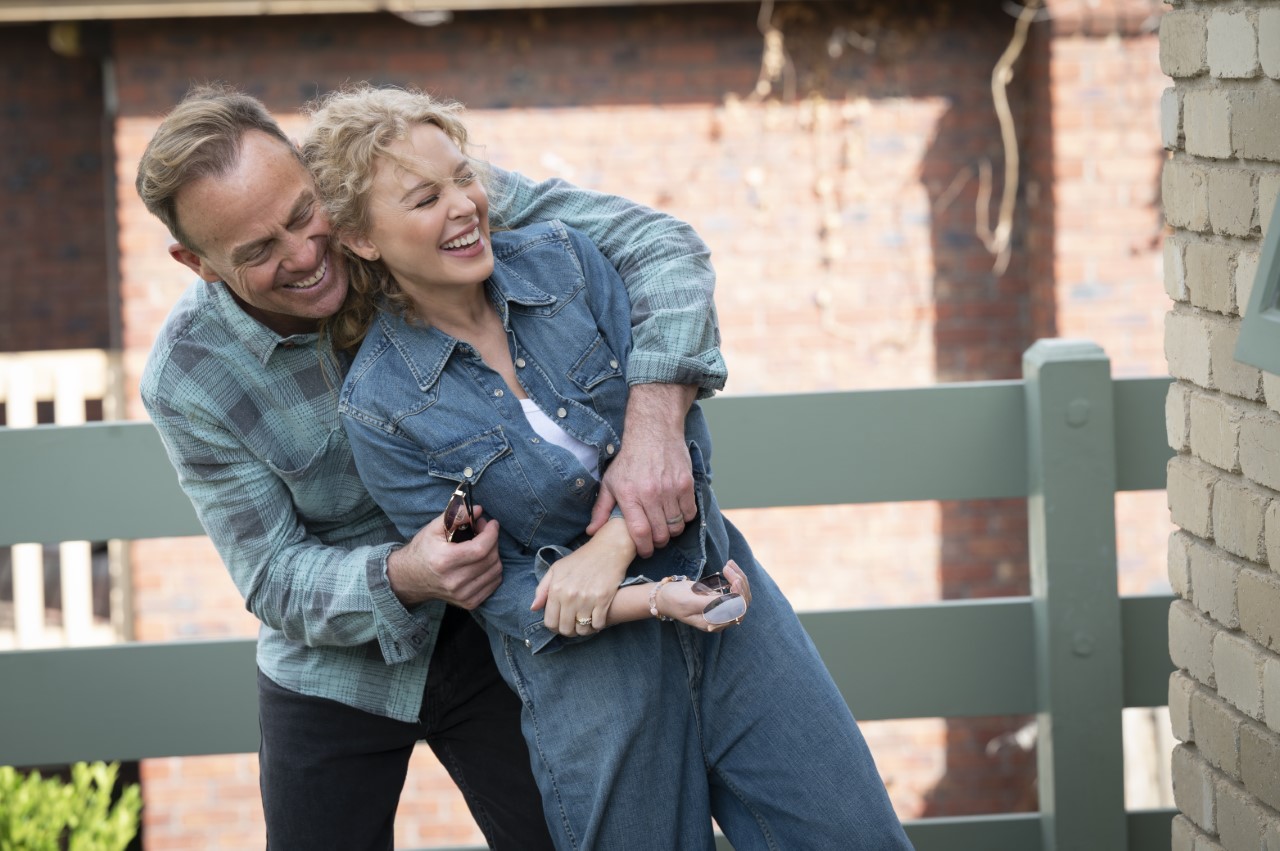 Kylie Minogue and Jason Donovan filming their scenes for the final episode of the series. (Supplied)

Some meals stick in your mind, and here’s one that has stuck in mine for 36 years, and counting. Let’s call it the gathering of The Teenagers Most Likely.

I was 18, and so were most of the people I was having lunch with this day, early in 1986. I’d never met any of them, nor heard of any of them. How strange it is to write that now, looking back at what came next. (For them, not me, I should note.)

One of my lunch companions went on to sell tens of millions of records, and is now so famous she is in that rare celebrity territory that lends its name to things like wines and perfumes. I’m looking at you, Kylie Minogue. Another guest that day went on to star in Oscar-nominated films, win an Emmy and other peak acting trophies in a critically acclaimed career: Guy Pearce. Another of the teenagers had a brief but stratospheric career in pop music and on stage that saw him conquer the charts and London’s West End. At lunch that day – Jason Donovan – he was the only one who suggested even a vague familiarity, by virtue of his parents both being famous TV personalities in Australia.

And me? Well, I’m the schmo who gets to write about it now, with a mix of nostalgia and awe that such wondrous career paths can lie in wait for people who, at the time, were remarkably unmemorable.

I mean this not as an insult to Kylie, Guy and Jason – they were charming lunch companions and perfectly nice in every way. But future fame and glory does not always suggest itself in teenage faces and forms. Perhaps sometimes, but not always. Talent and charisma play a part, but so does an enormous amount of luck, and I’m confident all of them would admit they’ve had plenty of that since that humble lunch in Melbourne in 1986.

You are no doubt asking by now: why is he banging on about a meal nearly four decades past? Indulge me. It’s because that was a lunch that heralded the start of something special not just for the future superstars gathered around the table, but for my hometown of Melbourne.

The occasion that day was the launch of the Australian soap opera, Neighbours; or more precisely, the relaunch. A little known fact lost in the mists of soap opera time is that Neighbours initially was a dud. It ran for a solitary year on one Australian TV network before being axed. Taking a gamble, another network picked up the programme, cast a bunch of unknown teenagers in leading roles, and relaunched it. Nobody expected much from it. It was creakingly banal, a sudsy drama set in Melbourne’s epically dull suburbia, with production values that had you wondering if the set might be about to collapse on the cast.

But somehow it worked, and within a year the dud was turning into the grand dame of Australian television.

It found a particularly enthusiastic reception in Britain, where the mundane goings-on in the fictional sun-dappled location of Ramsay Street, Erinsborough captivated a British audience huddled around heaters on bleak winter days. The show’s unofficial motto – “It’s always summer on Neighbours” – spoke to the bright and breezy tone. It had a knockabout Australian charm. Before long, the show was airing twice a day in the UK.

And then out of nowhere, some genius had the idea that Ms Minogue should try her hand at singing.

She didn’t sing with particular distinction, but the songs that were handed to her did not require that she do so. Her first hit was a remake of The Loco-Motion. It would be many years before she put her own stamp and aesthetic on her musical career, which eventually obliterated an acting career that sank largely without trace.

I remember travelling in Europe in 1988, two years after that lunch, and everywhere I went I heard her singing I Should Be So Lucky. The Singing Budgie, as she was dubbed in the days before she could catch a critical break, was conquering the world.

In all, the story of Neighbours – and of the stars who found their start there – is a wildly unlikely show business success story that on paper doesn’t make any sense. Why did this low-key, middling-budget suburban soap fest capture hearts around the world? And more to the point, why did it do so for an incredible 36 years?

Countless thousands of words are presently being devoted to this topic, because this week the fairytale is coming to an end. Melbourne, and Australia, despite having long moved past any widespread viewership of the show, is in a kind of mourning.

It is an odd thing to mourn, and an odd icon to celebrate, in a city like Melbourne, whose modern incarnation fancies itself as the sophisticated heart of Australia.

It is a place of fine food, of cultural heft, of musical innovation and artistic adventure. Neighbours is none of these things. Its culinary contribution to Australia’s food capital is minimal: the fictional pub The Waterhole at Lassiter’s, where much of the kitchen-sink drama has played out. You won’t find any fine dining on any of the Neighbours tours that have been separating wide-eyed Brits from their money for nearly 40 years. You won’t find any bold adventures of the kind celebrated on Neighbours’ Australian network stablemate MasterChef. It is very much a meat-pie-and-sauce version of Australian life. (I should note here that several decades on, Kylie Minogue has branched out into more sophisticated realms and now has her own huge, successful line of Kylie-branded wines.)

And yet, within its simplicity there is a much more interesting story.

On one level, there is the story of how the show has quietly adapted to a more diverse and open world, growing as the world around it changed. In The Guardian this week, you could find a list of 10 ways Neighbours changed Britain. Among the Kylie and Jason references, the list includes a Neighbours gay wedding in 2018, and its introduction of a transgender character the following year. These developments occurred without much fuss. Neighbours may not have led social and cultural change, but it has been admirably if belatedly willing to reflect it.

And then there is the programme’s contribution to the performing arts.

When the final episode of the series airs this week, the list of returning former stars is jaw dropping for a humble suburban soap.

Kylie will be there, reprising the role that started it all as Charlene the tomboy mechanic; her erstwhile on-and-off-screen love interest and duet partner Jason Donovan is also coming back. And then there are the Hollywood heavy hitters: Margot Robbie, who did three years on Ramsay Street, is making a cameo, a quick break from her $10 million-a-movie new life in LA; and Guy Pearce, whose Hollywood credits range from LA Confidential and Memento to Mildred Pierce and Mare of Easttown, is also back to say goodbye. It’s not clear what the budget is for this lavish finale, but either it runs to the tens of millions or some of these stars are doing it out of love. Other big names who did Neighbours duty before they were globally famous include Russell Crowe and Liam Hemsworth.

But what, I hear you ask, is it doing here in a food column?

Fair question, and here’s my answer…

I conclude this Valentine to Neighbours with some sage advice: always be nice to the young people you’re forced to share lunch with. They might just end up doing wondrous things you never dreamed of.

And the other lesson is this: when you meet one of them decades later and remind them that you have met before, be prepared to accept that your brush with them was definitely not something they remember with the same fervour that you do.

Yes, I did do that at a dinner with Kylie Minogue many years on, and she didn’t have a clue what I was talking about. Sometimes, a lunch is just a lunch on your way to somewhere else. DM/TGIFood