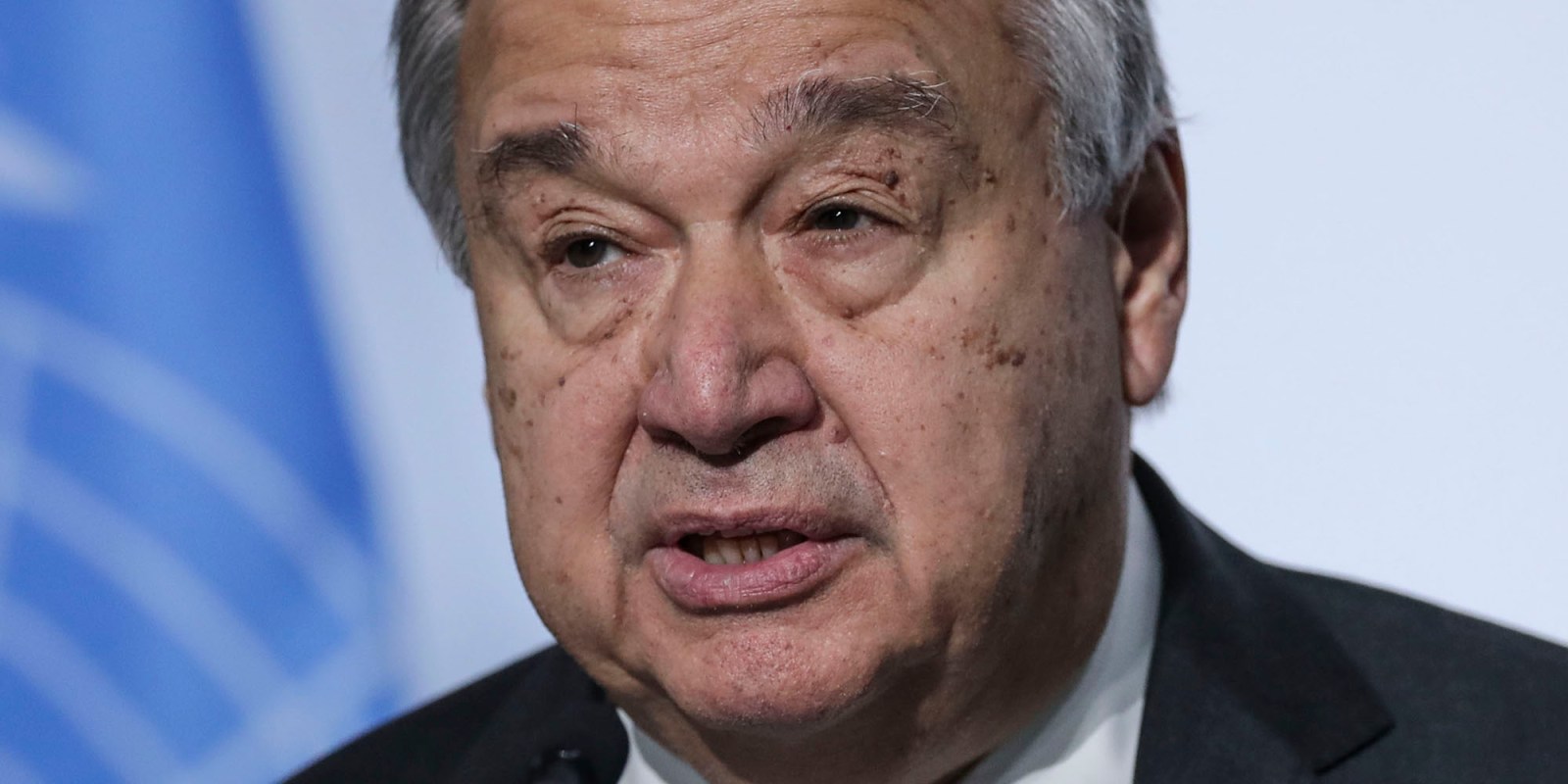 United Nations General Secretary Antonio Guterres during the press conference after the opening of the plenary session of the UN Ocean Conference at Lisbon, Portugal, 27 June 2022. He has blasted global energy companies for 'immoral' oil and gas profits. (Photo: EPA-EFE / Miguel A. Lopes)

Romania’s prime minister warned NATO allies that they will have to maintain an expanded troop presence on their eastern flank for at least the medium term as Russia appears intent on creating a buffer between itself and the western military alliance.

German Chancellor Olaf Scholz blamed Moscow for a delay in shipping a turbine for Gazprom PJSC’s Nord Stream 1 pipeline that’s at the heart of Europe’s gas crisis. The Kremlin responded by saying that the component, which is at a facility in Germany after undergoing routine maintenance in Canada, lacks documentation proving that it isn’t subject to sanctions.

The southern port of Mykolaiv and the city of Kharkiv in the northeast were shelled again overnight, local authorities said. In the Donetsk region, Russian forces are concentrating attacks toward Bakhmut to the north of the regional capital, Ukraine’s general staff reported. Russian forces launched two assaults in the northern Kherson region and are continuing to redeploy troops to the south, according to the latest assessment from the Institute for the Study of War.

The US Senate ratified adding Sweden and Finland to the North Atlantic Treaty Organization, a move intended to bolster the military alliance after Russia’s invasion of Ukraine.

The vote was 95-1, far exceeding the two-thirds majority required for the approval of treaties. If the ascension wins approval from all current members of the alliance, Finland will join Estonia, Latvia, Lithuania and Poland as NATO countries that share a land border with Russia.

Ukrainian President Volodymyr Zelensky accused Russia of generating a fresh round of propaganda as it begins to realise the legal consequences of its invasion of his country. He discounted remarks by former German Chancellor Gerhard Schroeder that the Kremlin is open to talks to end the war. Schroeder, in an interview with the German magazine Stern published on Wednesday, said he had met with Russian President Vladimir Putin last week. Schroeder has been widely condemned for his relationship with Putin.

“If Russia really wants to end up the war, it would not withdraw its reserves to the south of Ukraine and would not produce mass graves of murdered innocent people on Ukrainian territory,” Zelensky said in a Wednesday evening address. “It is disgusting when former leaders of powerful European states with European values work for Russia, which is fighting against those values.”

More ships loaded with grain are ready to depart from Ukraine’s seaports following the vessel Razoni, which arrived in Turkey on Tuesday, Ukraine’s Foreign Minister Dmytro Kuleba said without elaborating, according to the Interfax news service.

“We hope everything will work and the Russian Federation won’t make any steps that would ruin these agreements that have been so difficulty achieved via brokerage from the UN and Turkey,” Kuleba said in a news conference in Kyiv, according to Interfax.

Guterres, the UN secretary-general, tore into global energy companies, saying it’s “immoral for oil and gas companies to be making record profits from this energy crisis on the backs of the poorest people and communities, at a massive cost to the climate”.

Saying that the largest energy companies together tallied first-quarter profits of “close to $100-billion” amid the turmoil of the war in Ukraine, the secretary-general urged countries “to tax these excessive profits, and use the funds to support the most vulnerable people through these difficult times”.

In remarks to the Global Crisis Response Group on Food, Energy and Finance, Guterres repeated his calls for a negotiated end to the war in Ukraine, which he said has caused not only suffering in that country, but a global “threefold crisis of access to food, energy and finance”.

The Swiss government said it will match European Union sanctions on Russia and allow for some exemptions in respect to oil payments. The EU introduced measures last month allowing for transactions with some sanctioned entities if they’re deemed essential to supplies of food, agricultural goods and oil to third countries.

The package also includes measures targeting gold, which primarily included a ban on buying, importing or transporting gold and gold products from Russia. It also includes services in connection with those goods.

As western sanctions on Russian oil loom, a cargo of about 700,000 barrels of Russian oil was delivered to Egypt’s El Hamra oil terminal on its Mediterranean coast early on July 24. A few hours later, another vessel collected a consignment from the port – which may have included some or all of the Russian barrels – according to vessel-tracking data monitored by Bloomberg.

The unusual move makes the cargo’s ultimate destination harder to track, adding to a trend of Russian oil shipments becoming increasingly obscured since European buyers began to shun them following the nation’s invasion of Ukraine. BM