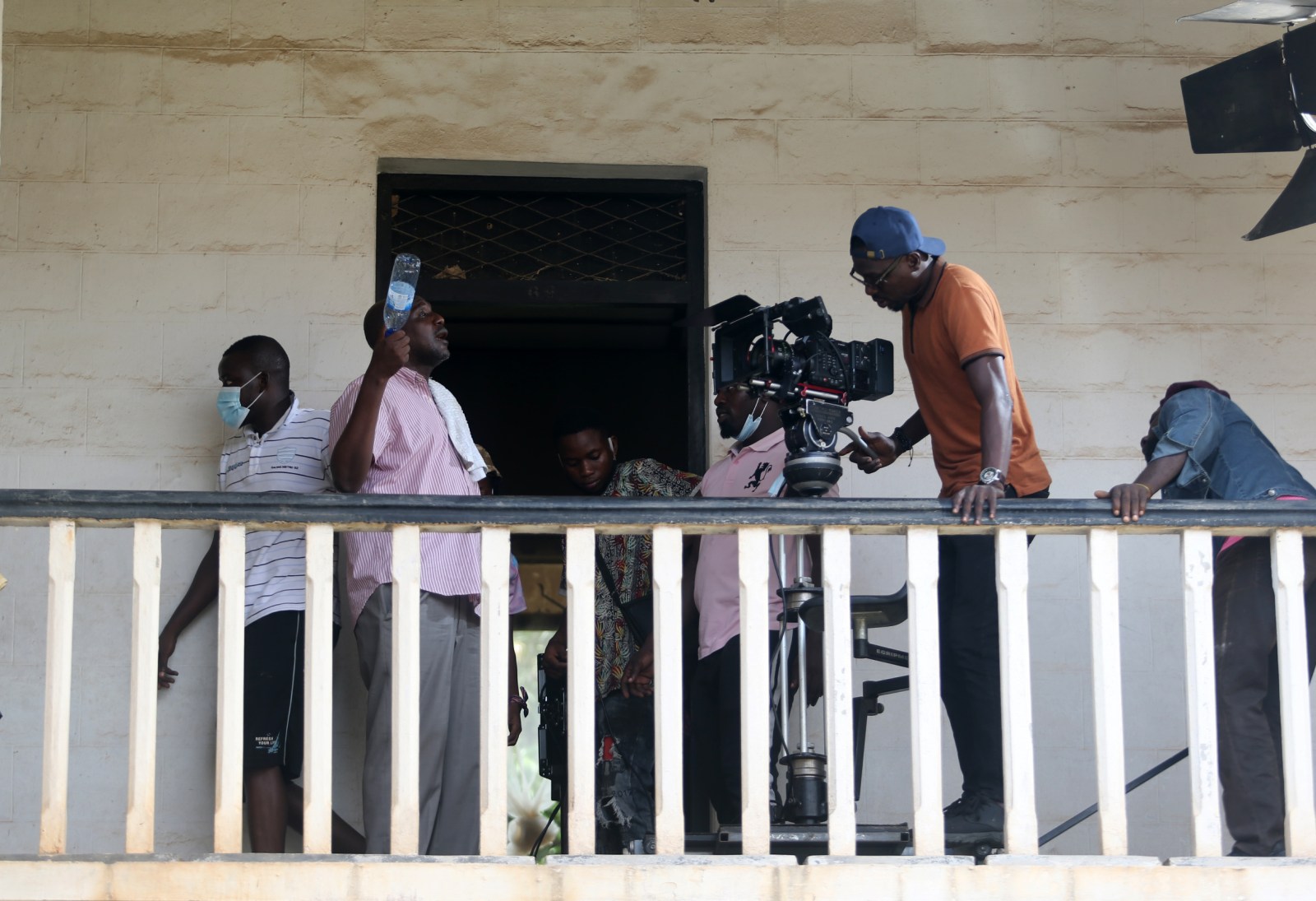 epa08870626 A film crew set the stage in a building during the movie shoot of an epic film titled 'AYINLA' in Abeokuta, Nigeria, 08 December 2020. The products of the creative economy not only provide outlets to express societal concerns but can be harnessed for deeper engagements with stakeholders country-wide. (Photo: EPA-EFE/Akintunde Akinleye)

The influential arts community, especially the youth, can work with government and civil society to reduce insecurity.

With insecurity growing across Africa, countries need creative solutions to ensure safer societies. In Nigeria, where Nollywood generates close to $600-million annually, and its Afrobeats music is gaining global popularity, the creative sector can help make security governance more effective by connecting with and drawing in citizens.

The comedy industry — ranked third behind movies and music — is estimated to be worth around $120-million annually, with its skit segment listed among the top five globally.

The creative sector is essentially driven by young people and employs about 4.2 million youth. They are the future of this sector but have also been at the forefront of protests demanding good governance and security accountability. At the heart of the creative sector-youth relationship is trust. This is the currency of influence that young people have invested in the sector but which the government struggles to earn due to decades of poor performance.

The arts industries have built an economy inspired by the imagination and resourcefulness of the youth. This can be channelled into communities as societal experiences also influence the minds of youth — the dynamic works both ways. When people engage with music, fashion, movies and art, they become part of their experience. These media help shape how people perceive society and how they relate to it and those around them.

This exchange of influence could be used to mobilise action around security and governance. Artists, for instance, shape issues far beyond the reach of politicians. Art, through entertainment and music, is understood by everybody.

The products of the creative economy not only provide outlets to express societal concerns but can be harnessed for deeper engagements with stakeholders country-wide. This should be explored further in Nigeria to test, learn and document what’s useful.

Research has established the role that the arts, music and sports can play in peacebuilding and reconciliation. For instance, Vandy Kanyako’s 2015 study demonstrates how Peacelinks — a group of youth performers — used the arts as a creative tool for peacebuilding and social mobilisation in Sierra Leone. The group mixed traditional folklore themes and cultural imagery not just to entertain but to educate and motivate young people to speak up and communicate peace and reconciliation messages.

Similarly, and beyond Africa, case studies from Asia demonstrate how art and cultural activities have promoted tolerance, empathy, dialogue and trust between opposing groups in communities devastated by conflict.

Art and creative sector initiatives aren’t immune to influences that perpetuate exclusion and domination. They do not necessarily end conflict or remove inequalities. So, to harness their potential for security governance, these approaches should be embedded in the social fabric of their local contexts and the broader peacebuilding vision.

This strategy should be nurtured from the grassroots level and deployed to allow for co-creation with local actors and anchored in mutual respect and integrity. South Africa’s Violence Prevention Forum is an example of how dialogue and action can be enabled, maintained and grown across sectors of a society.

To implement these ideas, the different creative industries whose influence could reach multiple groups should be identified and mapped. Given its advantage in highlighting difficult conversations, Nollywood could be a strategic medium for propagating peace and security in Nigeria. To date, it remains untapped.

A starting point is to encourage dialogue between conflict researchers, policymakers and creatives to brainstorm ideas that usually remain in their respective fields. Researchers, for example, can benefit from the creative sector’s capacity to widely disseminate their findings across virtual and in-person platforms.

The creative industries can communicate and translate knowledge into the ‘language of the streets’ in ways researchers and government officials can’t. And the arts community can enhance its understanding of security governance by drawing on evidence-based studies produced by researchers.

Policymakers could glean lessons from the trust evident in the creative sector’s engagement with citizens. Trust is vital for people-centred and effective policy implementation.

The levers of collective influence among all these stakeholders offer the potential for joint fundraising where everyone benefits. Government and the private sector can encourage investment in the creative arts when they recognise the socio-economic spinoffs reflected for example in greater employment opportunities for the youth.

For security in countries like Nigeria to improve, inclusive approaches that reflect all of society are needed. It is time for the government to engage the youth, not only through their voices in protest but also in the arts. DM

Research for this article is funded by the governments of the Netherlands and Norway.