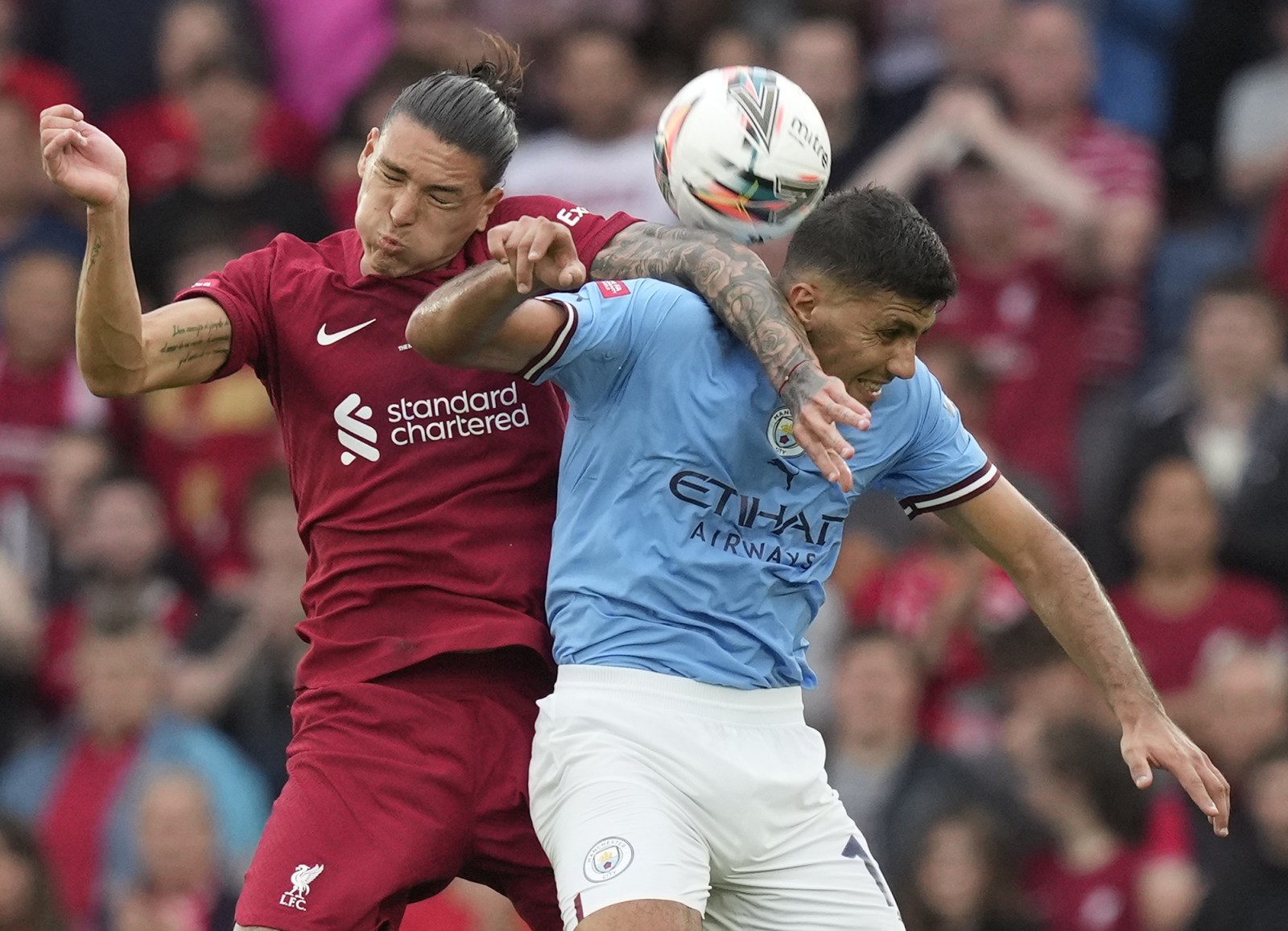 Champions Manchester City and constant rivals Liverpool will be the teams to beat again in the 2022/23 Premier League season.

The 2022/2023 English Premier League promises to excite and entertain every corner of the globe — as it often does — despite the small matter of a Fifa World Cup forcing it to a halt for six weeks in November and December.

The 2021/2022 Premier League was a whirlwind that went down to the last few kicks of the ball on the final day of the season.

That dramatic final day contained late comebacks as the Premier League title shifted from team to team with every other goal scored.

The 2022/2023 season kicks off on Friday night with Manchester City and Liverpool likely to compete for the title once again.

The challenge for a spot in the top four will also be tightly contested with Arsenal and Manchester United, in particular, seeking Champions League places after missing out last season.

Manchester City remain favourites for the title. Guardiola’s men often seem a few levels above the challengers in the league.

The silky interplay, seemingly telepathic movement and near flawless passing displayed by his side may look slightly different this season with the addition of highly acclaimed Norwegian striker Erling Haaland from Borussia Dortmund.

Haaland is an out-and-out striker who prefers the ball to his feet, a contrast to Guardiola’s usual tiki-taka style of play, which he deployed successfully last season without a natural centre forward.

City haven’t made too many changes to last season’s champion squad as they look to continue to dominate the league. City play the final match of the opening weekend against West Ham on Sunday evening at the London Stadium.

Top of the tree

Jürgen Klopp’s Liverpool side finished one point behind the Sky Blues last season in a season where the Merseyside Reds battled it out for an unprecedented quadruple trophy haul — ending the season as FA Cup and Carabao Cup champions.

Liverpool have been Manchester City’s biggest rival in the Premier League in the past five seasons, claiming the trophy once and finishing within a three-point margin of the champions twice.

They start this season without Senegalese winger Sadio Mané, who formed part of an iconic front-three trio with Brazilian Roberto Firmino and Egyptian Mohamed Salah.

Liverpool replaced Mané with Uruguayan striker Darwin Núñez, who joined from Portuguese side Benfica during the transfer window. Núñez has made a good start in Merseyside, scoring the third goal in the Reds’ 3-1 victory over rivals Manchester City in the FA Community Shield last weekend.

Liverpool’s spine has remained largely unchanged as they continue to look to last season’s golden boot winner Salah (23 goals) to lead the line and create opportunities for their new target man, Núñez.

Liverpool are experiencing their brightest period in 30 years in the Premier League and, with Klopp’s contract ending in 2026, the club will feel a sense of pressure to ensure they don’t end their golden era with only one Premier League trophy.

Liverpool open their account on Saturday with a trip to Craven Cottage to face newly promoted Fulham.

Tottenham Hotspur scraped to fourth place in the final match of last season. Since then they have done some of the most shrewd business in the transfer market.

This season the North London side have increased their attacking options while reassuring their defensive solidity. Former Inter Milan winger Ivan Perišić and former Everton striker Richarlison will provide manager Antonio Conte with quality and depth up front.

Tottenham have gone under the radar. However, this season they have a squad with quality depth coupled with an astute, experienced coach.

Dark horses for the title, Tottenham kick off their season at home against Southampton.

Arsenal missed out on a top-four finish last season to their North London rivals, but will look to go one better with manager Mikel Arteta in his third full season with the club.

Arsenal look to have fixed their problem areas, having signed Manchester City striker Gabriel Jesus to provide a goal-scoring outlet, while also securing the signing of playmaker Fabio Viera from Porto.

Arteta is building towards the future with club captain Martin Ødegaard still only 23. However, another season outside the top four may signal the end of Arteta’s reign.

Arsenal kick off the premier league season with a tough opening encounter against Crystal Palace on Friday evening at Selhurst Park.

The Blues from London struggled upfront. Midfielder Mason Mount led the charts with 11 goals for the side.

Chelsea have looked to rectify this with the purchase of Sterling, who slotted 13 goals for his side last season.

They have not replaced any of the three key players yet and may struggle this season with German manager Thomas Tuchel going into his second full season with the club.

Chelsea open their account with a fixture against Everton at Goodison Park on Saturday.

Manchester United are more likely to have a season of steady transition than a season of sustained excellence.

United is the most successful club in the Premier League era with 13 titles. This has created an air of expectancy every season and led to disappointment in recent years. However, things seem slightly different at United this season.

The Red Devils have cleared out several members of their dressing room with mercurial midfielder Paul Pogba the biggest name among the departures, with the Frenchman heading back to Italian club Juventus.

The signing of playmaker Christian Erikson, joining from Brentford, should fill the Pogba vacancy.

They have also brought in new manager Erik ten Hag who — albeit untested outside of the Netherlands, coaching Ajax Amsterdam — brings with him quality and a distinct attacking style of play.

However, the Premier League is the toughest league in the world and despite his proven excellence, Ten Hag will need time to adapt and implement his preferred system into a team that is in a changeover period.

Manchester United open their campaign against Brighton on Sunday.

Fulham have been a yo-yo team between the English Football League Championship (the second division) and the Premier League in recent years. In the past six seasons, they have bounced between the two leagues every season.

Fulham will look to their leading goalscorer, Aleksandar Mitrovic who plundered 43 league goals in the second tier, to help put an end to the up-and-down trend.

The Cottagers will be heavily reliant on the playmaker and sharpshooter combination, something that form or injury could easily dampen.

Bournemouth spent the last two seasons in the Championship after spending five years in the Premier League. Their relatively swift return has not brought too many changes, apart from one in management, where former Fulham man, Scott Parker, is now in charge.

Parker has admitted to his team’s vulnerabilities, exclaiming: “We’re way short of where we need to be,” this past weekend.

Eight first-team players have left from the squad that went up last season, while only three new players have been signed.

Nottingham Forest had spent this entire millennium in the second division of English football, but they are back at the top table.

This season sees a change to not only the division they are participating in, but also an almost complete overhaul to their squad. Manager Steve Cooper has spent the transfer season shopping for young talent such as Neco Williams, Giulian Biancone and Lewis O’Brien to shore up his side.

However, Cooper did make one marquee signing — that of Manchester United’s Jesse Lingard, to provide Forest with an attacking spark.

Forest face an uphill battle to ensure their first appearance in the Premier League in more than 20 years lasts longer than one season.

They open their account against Newcastle away on Saturday.

The Premier League kicks off on Friday night with a clash between Arsenal and Crystal Palace at Selhurst Park at 9pm SAT.

The 18 other teams kick off the season on Saturday and Sunday, with nine matches scheduled across England this weekend. DM