DA and IFP retain seats in latest round of local polls 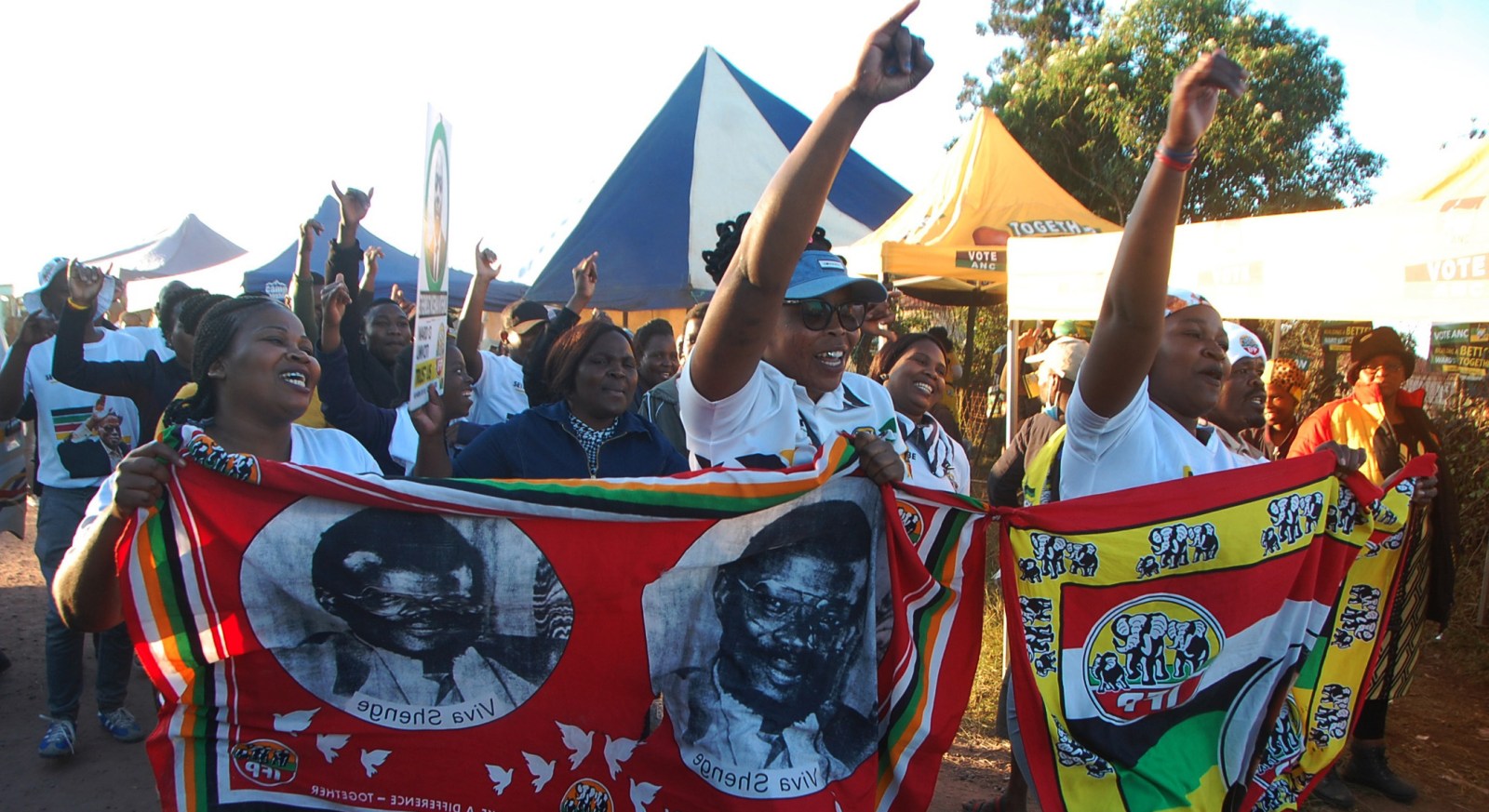 Voters were in high spirits, singing and dancing on by-election day in Ward 13 in Matimatolo near Greytown, KwaZulu-Natal, on 1 June 2022. (Photo: Phumlani Thabethe)

In four by-elections this week, the DA and the IFP had important holds, with the DA retaining its seats in Tshwane and Modimolle, while the IFP had to fend off a serious challenge from the ANC in uMvoti.

The setting: Kranskop and Hermannsburg lie near the Thukela River Valley. The two small towns are on the R74 regional road which links Greytown with Maphumulo and KwaDukuza. Greytown is the principal town in uMvoti, and uMvoti is part of the Umzinyathi District which contains the other large towns of Dundee, Nqutu and Tugela Ferry.

The by-election: Voters returned to the polls in Ward 5 because of the death of the former councillor. In a June by-election in uMvoti, the ANC narrowly held onto a seat. What was interesting about that result was that the three biggest parties in the municipality (ANC, IFP, ABC) all lost ground in their respective strongholds. The IFP was denied victory because it was unable to replicate its achievements in the traditional ANC strongholds in that by-election in the traditional IFP areas. Would that trend continue in this by-election?

The ANC gave the IFP a big fright in Ward 5. This is despite the fact that the IFP actually did better in the by-election compared with its 2021 showing. The ANC’s good showing was built on it collapsing the ABC’s support in the ward. The third-largest party in uMvoti had a woeful outing. The Enseleni Creche voting district around Hermannsburg is the most vote-rich part of the ward. The ABC won more than 30% of the vote in this district in 2021. It only won 1% in the district in the by-election. The ANC’s percentage vote share shot up from 18% to 48% as it fell just short of the IFP’s vote share in the district. The ANC won five out of the nine districts in the by-election. They won a district off the DA, which did not contest the by-election, and two off the IFP.

The IFP’s 122-vote margin of victory was built on getting more votes than the ANC in the Enseleni Creche district and also running up the numbers in two of the smaller rural voting districts.

The ABC’s poor showing could have ramifications for the 2024 election in KwaZulu-Natal. Is this result a sign that former ANC voters who supported the ABC in 2021 are going to come back to the ANC now that Siboniso Duma and a leadership team that is seen as more partial to Jacob Zuma are steering the ANC ship in the province?

The by-election: It was held because of the passing of the former councillor. It is a high-stakes by-election because a loss for the IFP would cost it an outright majority in the municipality.

The IFP had a good win here. Key to its increased returns was the party’s result in the most vote-rich part of the ward – the Manqamu High School voting district. The IFP took a large chunk out of the EFF’s base in the ward as its vote share increased from 42% to 53%, while the EFF’s fortunes declined from 28% to 13%. The IFP won all five voting districts in the ward to ensure it retained outright control of the municipality.

The setting: This suburban ward sits underneath the Groenkloof Nature Reserve and abuts the Pretoria Country Club. Most of the voters here live in Waterkloof Ridge. Monument Park is the other suburb in the ward which lies between the R21 regional road and the N1 national road.

The 2021 local government election: The DA won here by a landslide in 2021 – by 5,300 votes. It did, however, lose ground compared with the 2016 elections – to the Freedom Front Plus (FF+) and ActionSA. The FF+ did better in Monument Park than Waterkloof Ridge, getting 16% of the vote in both Monument Park districts. The DA won more than 75% of the vote in three of the four Waterkloof Ridge districts.

The by-election: The previous ward councillor died. ActionSA did not throw its name into the hat for this by-election. The DA had a comfortable hold in Tshwane, increasing its percentage vote share and winning more than 80% of the vote in two of the Waterkloof Ridge districts. The FF+ had a solid second-place finish. It won more than 20% of the vote in the two Monument Park voting districts.

The setting: Ward 12 includes the suburban rump of the town of Modimolle. It is the most affluent part of Modimolle, a town that sits between Bela-Bela and Mookgophong on the R101 regional road. It is known for its cattle and citrus farming and is surrounded by many game reserves. The municipality forms part of the Waterberg district, which also encompasses places such as Lephalale, Mokopane and Thabazimbi.

The 2021 local government election: The DA and other opposition parties were able to keep the ANC from power by running up the numbers in this ward. The ANC came very close to an outright majority in Modimolle-Mookgophong, but the turnout and the result in Ward 12 contributed to them falling just short. The DA’s win here in 2021 was instrumental in allowing Marlene van Staden to return as mayor of the town.

The by-election: The previous ward councillor resigned from the council. The DA cantered to victory in the by-election but did lose ground to the FF+. The latter’s growth was built around the larger voting district in the ward – Susan Strijdom School. It grew from 21% to 33%, while the DA’s vote share fell from 74% to 65%. This trend was not uniform. The other voting district in the ward, the Kokanje Retirement Resort, saw the DA’s vote share increase from 69% to 76%, while the FF+’s vote share declined from 30% to 24%.

Read more in Daily Maverick: “Boks ticked – spring comes early for the DA in Vanrhynsdorp thanks to PA, GOOD and FF+ voters”

The next round of by-elections are on 31 August. The ANC will defend three safe seats in Mpumalanga, while the IFP will defend a safe seat in Mthonjaneni (Melmoth), KwaZulu-Natal and the DA will meet the FF+ again in Sol Plaatje (Kimberley) in the Northern Cape. DM