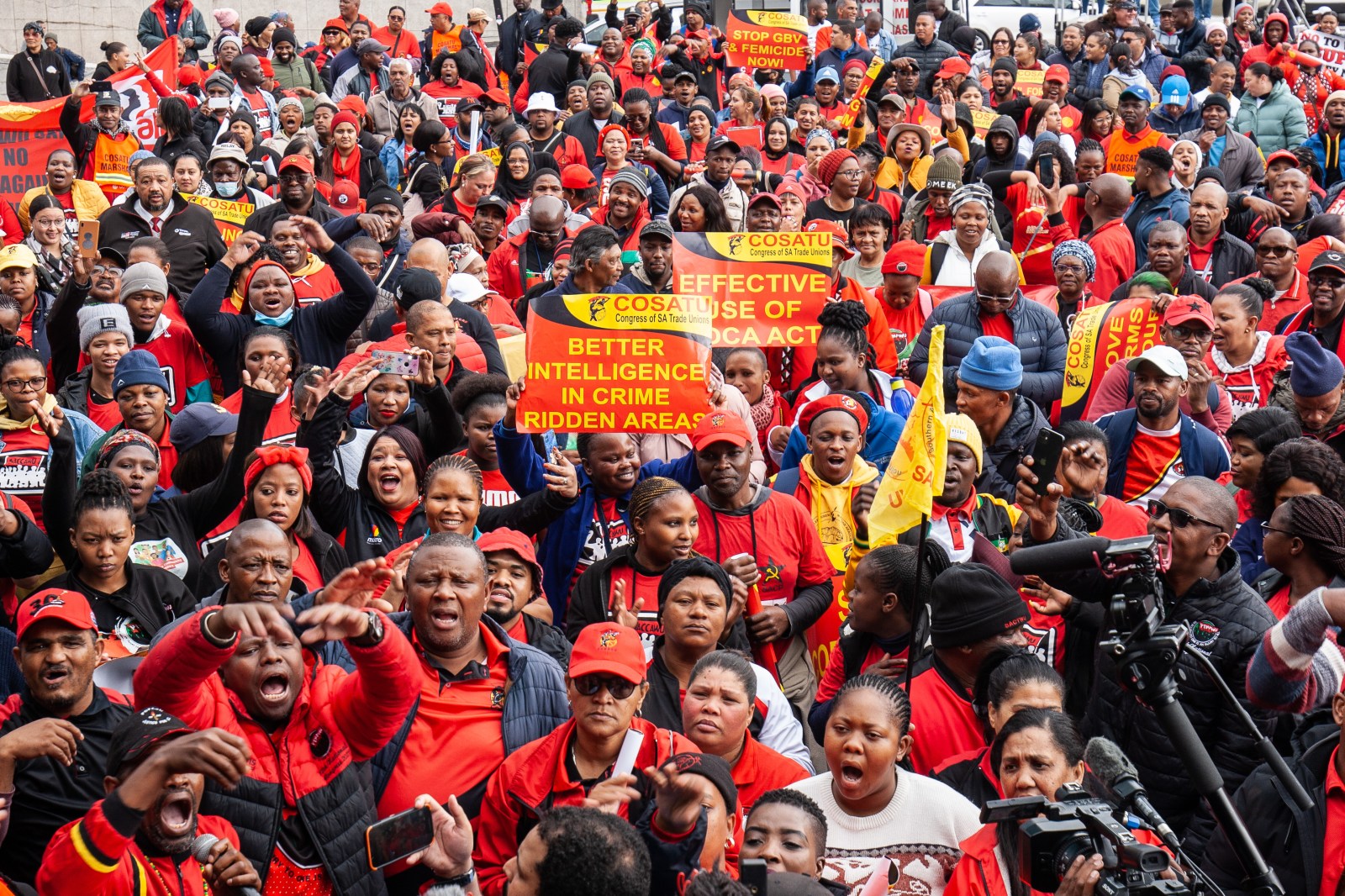 The Congress of South African Trade Unions organised a march against crime in Cape Town on Thursday, 4 August 2022. The federation had expected more than 3,000 marchers but only a few hundred turned up. (Photo: Ashraf Hendricks)

The protesters were demanding that the national and provincial governments end gang violence, conduct regular police patrols in industrial areas, improve safety at railway stations and allow communities to evaluate their police stations.

Protesters from unions affiliated with the Congress of South African Trade Unions (Cosatu) turned away two government representatives when they came to collect lists of demands in Cape Town on Thursday.

The protesters were demanding that the national (ANC) and provincial (DA) governments end gang violence, conduct regular police patrols in industrial areas, improve safety at railway stations and allow communities to evaluate their police stations. They also demanded a comprehensive review of the fuel price regime to reduce fuel costs.

Cosatu had said at least 3,000 people would attend, but only a few hundred joined the protest. The union’s provincial secretary, Malvern de Bruyn, said the numbers were disappointing.

When Cape Town mayor’s chief of staff, James-Brent Styan, came to collect the memo on behalf of Mayor Geordin Hill-Lewis, he was chased away by protesters.

Styan said Hill-Lewis was not available to collect the memo. He said some of the demands were not part of the mandate of local government, but he agreed that more needed to be done. “We support the fact that someone is driving more attention to this,” he said.

An address by the MEC of Police Oversight and Community Safety, Reagen Allen, was cut short when protesters demanded to speak to Western Cape Premier Alan Winde instead.

“The premier remains committed to engage with Cosatu,” said Allen. “If I had the time, I would have marched with you to the national Parliament to show that we need to take the fight to the national government as well.” Allen was asked to leave.

“They have misdirected their resources. They don’t experience the situation where when you wake up in the morning and go to the bus stop, you’re mugged, robbed, or killed. You, as an ordinary worker, have no one to protect you,” Tsubane told protesters.

“The violence in our communities is becoming worse,” said Pauline Petersen, a shop steward for the South African Textile Workers Unions (Sactwu). “Our families are being killed and raped and nothing is being done.”

Petersen lives in Heideveld and works as a machinist in Maitland. She said she spends R300 a week commuting to work and earns R1,200 weekly after deductions.

“It’s very dangerous there. People shoot every day and every day people die in Hanover Park, Manenberg and Heideveld. Nobody does anything because it’s not their children, it’s our families being raped and killed and it’s heartbreaking to see that every day.”

Police Minister Bheki Cele addressed the protesters, saying more police resources had been allocated to the Western Cape than to other provinces.

Cele said the Western Cape is “the only province that has a fully-fledged Anti-Gang Unit”, and that of the 5,000 police officers trained in 2019, 1,200 were sent to the Western Cape.

“The provincial commissioner has moved resources from these stations you talk about. Whenever I’m here to collect dead bodies, I’ve never collected dead bodies from Constantia, Bishops Court or Camps Bay. All dead bodies come from the Cape Flats, if not Hanover, it’s Khayelitsha, Delft.”

He said “policing alone cannot deal with crime” and the “major problem” was the lack of infrastructure within the communities experiencing high crime rates.

Cele said when police are called to areas like Covid informal settlement, they need to leave their vans and walk in “because there are no roads”. “You can’t walk there, there’s no light and it’s dark, there’s no streets or house numbers. Even if you call the police, you can’t tell the police where to go.

“In Nyanga, there is a large hijacking rate because there are huge potholes so cars are forced to slow down and they are hijacked … local, provincial and national government need to work together to improve the situation.”

Cele said the SAPS had recruited 10,000 trainee officers to be deployed across South Africa by December. DM