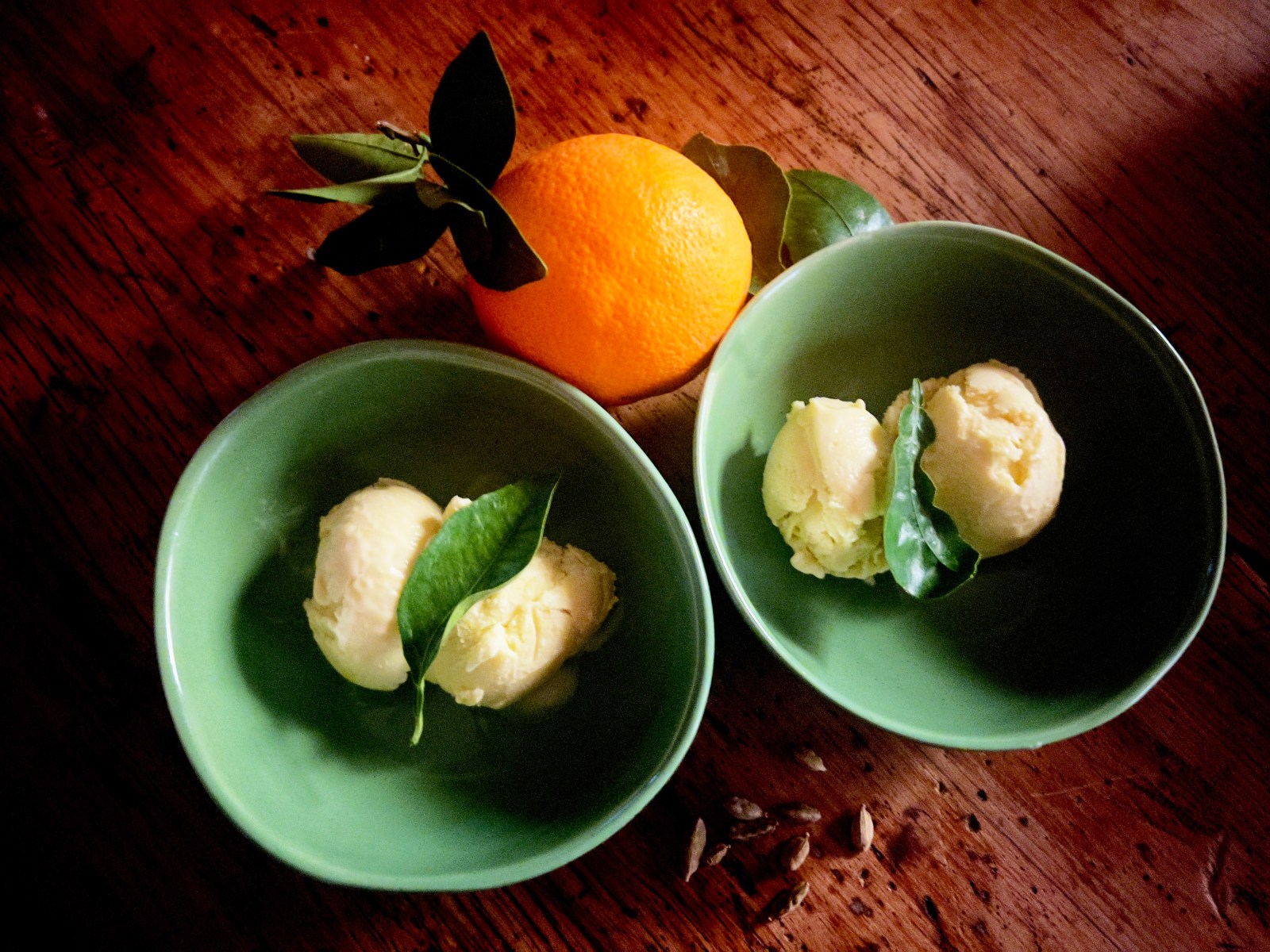 This fragrantly spicy ice cream is perfect to end an exotic supper such as the Saag Gosht recipe (published on Tuesday) and the Kashmiri Pulao (published on Monday). Time to plan a little dinner party…

My basic French-style ice cream recipe can be adapted in any number of ways. It began as a vanilla ice cream in the French tradition of beginning by making a custard, which then freezes with no fuss whatsoever. I use a stainless steel bowl to freeze it in, because I like the way the steel conducts the chill so effectively and helps it freeze quickly.

The joy of this recipe is that you do not need an “ice cream maker”, whatever that is (I’ve seen them on TV but my interest in them goes no further than that); this recipe needs no churning at all. You just make the custard, cool it and freeze it. Just like in the olden days. Marvellous.

Make an orange syrup first and allow enough time for it to cool to room temperature. Squeeze the juice of 4 large oranges into a heavy saucepan. Add 10 cardamom pods and bring to a boil. Boil rapidly until it reduces to a syrup. Cool completely and then fish out the cardamom pods and discard them.

Whisk the egg yolks in a metal bowl with ½ cup of castor sugar until creamy and pale yellow. Set aside.

In a saucepan, heat the cream and milk with a hint of salt and a ¼ cup of castor sugar on a very low heat. Stir until the sugar is dissolved. Warm the orange syrup a little, then whisk it into the dairy mixture until thoroughly incorporated.

In a fine stream, pour the milk mixture into the bowl with the creamed egg and sugar mixture, stirring constantly with a wooden spoon, until combined. Pour this back into the saucepan and put it on a low heat again, stirring or whisking all the while, until it thickens into a custard resembling a crème Anglaise and coats the back of a dessert spoon.

Pour it into a metal bowl and put it in the freezer. There’s no need to stir it every few hours; just leave it alone and it will freeze perfectly in six hours or more.

Remove it from the freezer about five minutes before serving, so that it softens slightly. Try it after my Saag Gosht and Kashmiri Pulao. DM/TGIFood