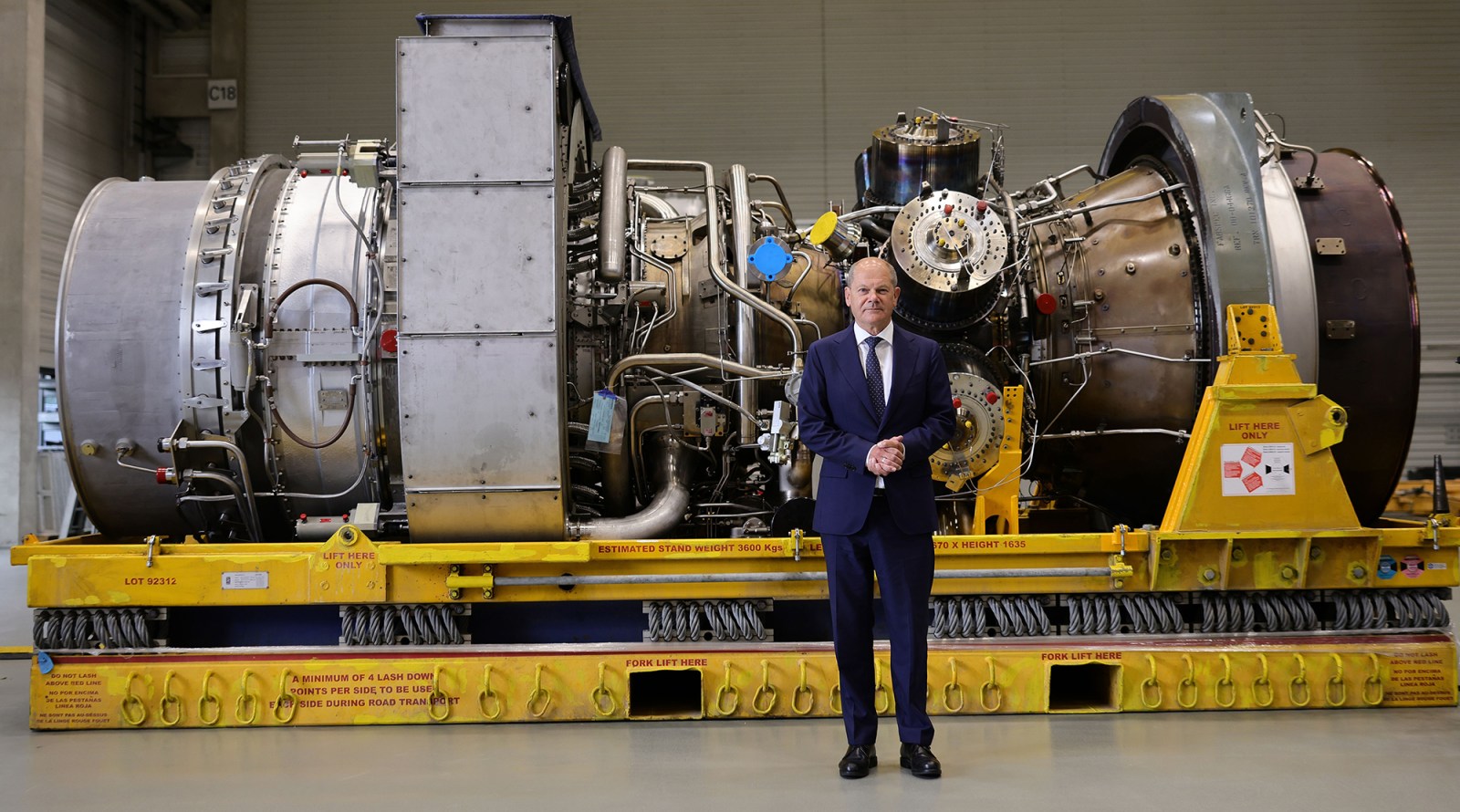 German Chancellor Olaf Scholz in front of the Siemens gas turbine intended for the Nord Stream 1 gas pipeline in Russia at a Siemens Energy facility on 3 August 2022 in Muelheim an der Ruhr, Germany. The turbine underwent maintenance in Canada and was supposed to have already been delivered to Russia for installation back into the pipeline, but Russian energy company Gazprom has so far refused to accept the repaired turbine, citing insufficient documentation. (Photo: Andreas Rentz / Getty Images)

Romania’s prime minister warned Nato allies that they will have to maintain an expanded troop presence on their eastern flank for at least the medium term as Russia appears intent on creating a buffer between itself and the Western military alliance.

German Chancellor Olaf Scholz blamed Moscow for a delay in shipping a turbine for Gazprom’s Nord Stream 1 pipeline that’s at the heart of Europe’s gas crisis. The Kremlin responded by saying that the component, which is at a facility in Germany after undergoing routine maintenance in Canada, lacks documentation proving that it isn’t subject to sanctions.

The southern port of Mykolaiv and the city of Kharkiv in the northeast were shelled again overnight, local authorities said. In the Donetsk region, Russian forces are concentrating attacks toward Bakhmut to the north of the regional capital, Ukraine’s general staff reported. Russian forces launched two assaults in the northern Kherson region and are continuing to redeploy troops to the south, according to the latest assessment from the Institute for the Study of War.

Antonio Guterres, the UN secretary-general, tore into global energy companies, saying it’s “immoral for oil and gas companies to be making record profits from this energy crisis on the backs of the poorest people and communities, at a massive cost to the climate”.

Saying that the largest energy companies together tallied first-quarter profits of “close to $100-billion” amid the turmoil of the war in Ukraine, the secretary-general urged countries “to tax these excessive profits, and use the funds to support the most vulnerable people through these difficult times”.

In remarks to the Global Crisis Response Group on Food, Energy and Finance, Guterres repeated his calls for a negotiated end to the war in Ukraine, which he said had caused not only suffering in that country, but a global “threefold crisis of access to food, energy and finance”.

The Swiss government said it will match European Union sanctions on Russia and allow for some exemptions in respect of oil payments. The EU introduced measures last month allowing for transactions with some sanctioned entities if they’re deemed essential to supplies of food, agricultural goods and oil to third countries.

The package also includes measures targeting gold, which primarily included a ban on buying, importing or transporting gold and gold products from Russia. It also includes services in connection with those goods.

As Western sanctions on Russian oil loom, a cargo of about 700,000 barrels of Russian oil was delivered to Egypt’s El Hamra oil terminal on its Mediterranean coast early on 24 July. A few hours later, another vessel collected a consignment from the port — which may have included some or all of the Russian barrels — according to vessel-tracking data monitored by Bloomberg.

The unusual move makes the cargo’s ultimate destination harder to track, adding to a trend of Russian oil shipments becoming increasingly obscured since European buyers began to shun them following the nation’s invasion of Ukraine.

The US is still trying to muster global support for a price cap on Russian oil to curtail energy revenue funding Russia’s war in Ukraine, a senior Biden administration official said.

“We’ve worked with the G7 allies, we were in Europe last week discussing it with some countries as well, and we continue those discussions,” Amos Hochstein, senior adviser for energy security at the State Department, said in an interview on Bloomberg Television.

US officials have struggled for traction on the price cap plan at a time when the Russian invasion has caused global energy and food prices to spike, while China and India continue to buy discounted Russian crude. Asked about the Chinese and Indian purchases, Hochstein said, “As far as other countries joining, I think we’re still putting the mechanism together and discussing it with other countries.”

The first grain ship to sail from Ukraine’s ports since Russia’s invasion passed an inspection and will continue through the Bosphorus Strait to its destination in Lebanon, Turkish and Ukrainian authorities said. The Razoni is loaded with 26,527 tonnes of maize and reached the Black Sea entrance to the strait on Tuesday after leaving Odesa on Monday.

A deal on restarting grain exports reached by Russia and Ukraine last month provided for monitoring of vessels by a joint coordination centre in Istanbul staffed by representatives of the two countries along with Turkish and United Nations officials. Ukraine has laid out plans to cautiously ramp up grain exports after the first ship sailed, but said the first two weeks will be treated as a trial period.

Commerzbank warned that Germany could face a slump similar to the contraction seen after the 2008 financial crisis if Russia were to cut off gas supplies.

A bellwether for Europe’s largest economy because it caters to Germany’s small and medium-sized companies, Commerzbank said it would expect to set aside another €500-million to €600-million for bad loans as a result. Germany is among the countries most vulnerable to threats of a shutoff because it built up its reliance on cheap Russian fuel over the past several decades.

Romania says Nato must dig in for long deployment in east

It’s “wishful thinking” to expect relations between Russia and the West to return to their pre-war status soon after the fighting stops in Ukraine, according to Romanian Prime Minister Nicolae Ciuca.

Read more: Nato must dig in for long deployment in east, Romania warns

While he said he didn’t think Russia would attack a Nato country, the current war confirmed more than a decade of warnings from the alliance’s eastern members that Putin is bent on taking back territory once controlled by the Soviet Union.

Speaking at a Siemens Energy facility in western Germany, German Chancellor Olaf Scholz said nothing was preventing the Nord Stream turbine, which had been sent to Canada for maintenance work, from being transported to Russia.

The component was temporarily stranded in Canada because of sanctions, before the government in Ottawa decided to allow it to be shipped to Germany, where it’s since been stuck waiting for the go-ahead from Moscow. Gazprom has reduced flows through the Nord Stream pipeline, citing technical issues and missing documents. The most recent reduction leaves it operating at about 20% of capacity.

CME Group is considering new wheat futures as traders shy away from the existing Black Sea contract due to Russia’s invasion, according to people familiar with the matter.

The Chicago-based bourse, one of the world’s largest derivative exchanges, has been consulting traders and brokers on starting a contract for Romanian wheat, said the people, who asked not to be identified because the information is private. No final decision has been made and talks may not result in a new product, they said. DM