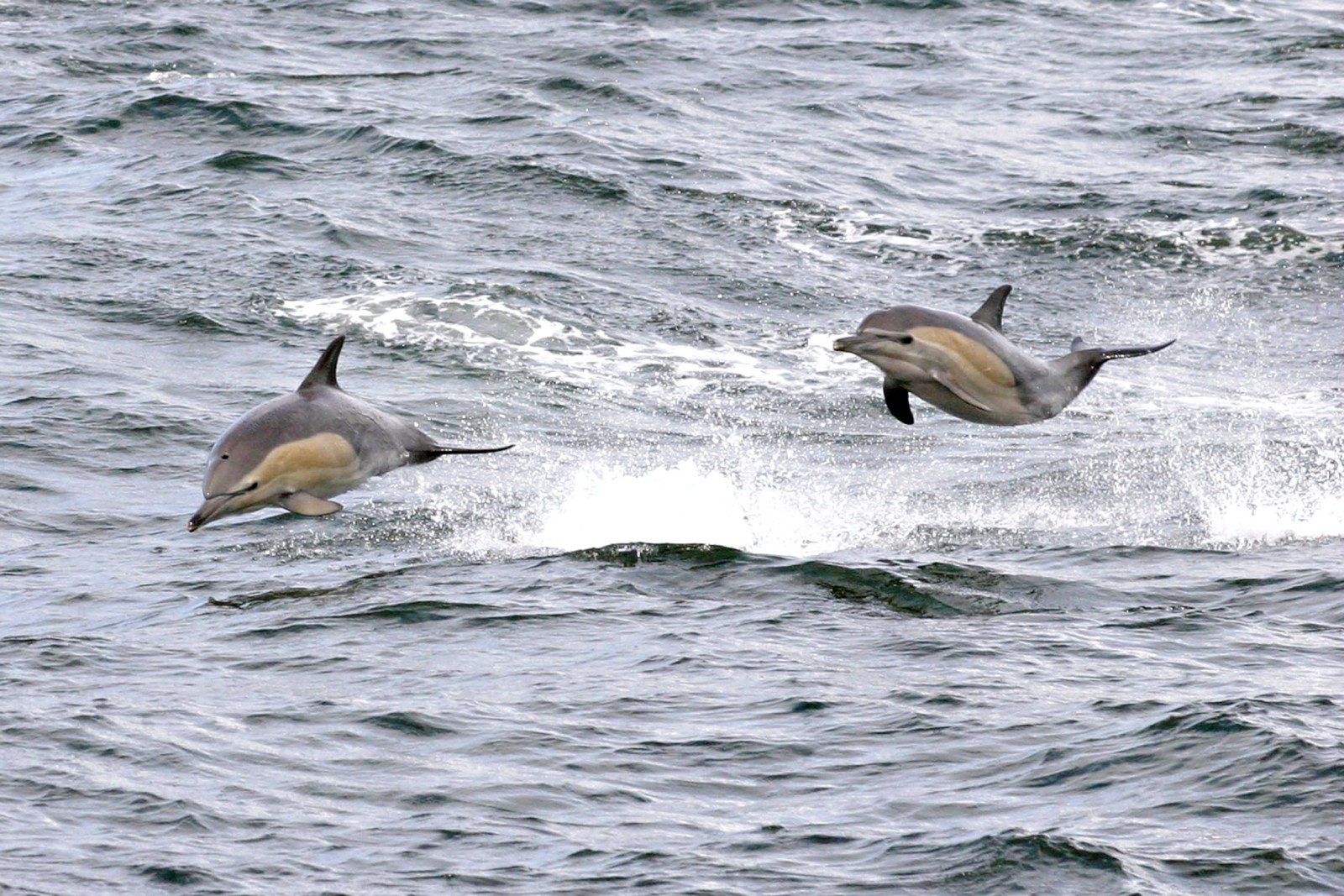 Two bottlenose dolphins cavorting in the sea, jumping high out of the water, off the coast of False Bay. Image: Supplied

A legend of a swimmer tells a legend of a tale about the first successful False Bay crossing, back in 1989.

While seven South African swimmers are set on to take on the Everest of all swims, the English Channel, one local man remembers the first time a European woman came out and swam across South Africa’s very own Channel – the daunting 34km False Bay.

Cape Town octogenarian Tony Scalabrino is a modest sort. When you’re sat opposite him at a dinner table, it’s not immediately apparent that here is one of the true pioneers of open-water swimming. If you see this 80-year-old plugging out lengths at Sea Point Pavilion, you might get a glimmer of the stern stuff that history is made of. He’s definitely not the fastest swimmer ever, but there’s a naughty glint in his one eye. And Scalabrino only has the one eye; the other is a glass eye. People tell the tale of Scalabrino being washed on to the beach like a barrel after one exhausting seven-hour swim. A medic who didn’t know that Scalabrino had a glass eye saw him lying collapsed on the sand and rushed over, tapping his eye to check corneal reflexes, obviously to be confronted with a stiff, non-responsive eye. The medic then nearly died of a heart attack when Scalabrino sat up and asked him what the hell he thought he was doing, tapping away like that.

He’s also a great teller of tales. Like this gem.

It is early 1989, and the international swimming world and the dailies are gobsmacked by what a bunch of mad swimmers are getting up to in Cape Town. Icy water. Sharks. Serious distance. The ink barely seemed dry on the headlines from the inaugural double Robben Island relay race a year before, so, reading the room perfectly, a local company called Penny Pinchers brought Belgian open-water sensation Annemie Landmeters out to Cape Town to showcase her talent.

Landmeters duly smashed all the local women’s Table Bay records, as well as taking about three and a half hours off the quickest man to date in the epic 22km Three Anchor Bay to Robben Island and back, then asked if it was possible for her to swim across False Bay. It was a sore point. A lot of very good South African swimmers had tried to swim across that bay, and they had all failed, most of them, including Cape Long Distance Swimming Association founder Peter Bales, defeated by the currents halfway across.

In fact, local swim stalwart Derek Yach had been training specifically for that very swim for months, but hadn’t even been able to set foot in the water, Scalabrino says. His support crew just could not pin down the correct set of conditions for a swim to even start, never mind finish.

In those days, a swimmer and his team wanting to do a False Bay crossing east to west, would have had to leave Cape Town at 2am and get their boats and equipment down to an unpredictable sea, without any real surety about what to expect when they got there.

Yach had previously asked Scalabrino to investigate the best route, and to that end Scalabrino had consulted all the boffins, the Sea Fisheries people, the fishermen, the meteorologists, trying to plan this swim.

After tea at a Hangklip café one Sunday morning, Scalabrino and his wife had started chatting to one of the regular divers, who reckoned that the best route for a swimmer would be to start at Rooi Els, on the east side of the bay, and aim for Muizenberg in a north-westerly direction. Then, once past the current in the middle, turn due west. Hopefully you’d raise land again at Smitswinkel Bay.

Scalabrino then chased down two varsity research students, one of whom had built a scale model of False Bay, complete with water flow, while the other had hired a light aircraft to fly over False Bay and drop paint bombs to study the current direction. But the two disagreed with each other’s findings, and Scalabrino was no closer to solving the problem.

And now here’s Annemie Landmeters. It’s another Sunday afternoon. She’s only in town for a few days. No time to study weather patterns. In desperation Scalabrino rings his go-to weather expert, the meteorologist at the Met Office at the Nuclear Power Station. But it’s the weekend, so everything is closed.

He knew the telephone number for Penguin, as everyone nicknamed the lighthouse at Cape Point. He thought he’d give the staff there a ring and see what they had to say about the weather over the next few days. Scalabrino phones, but misdials.

“Is this Penguin?” asks Tony.

“No, what on earth are you trying to speak to a penguin for?” comes the bewildered response.

Scalabrino apologises and explains that there is this lady who wants to swim across False Bay.

“She must be bonkers,” comes a shouted reply, perhaps slightly more colourful than that. “But I can tell you, the weather will be perfect tomorrow, Monday morning, and the sea will be flat, flat, flat. I’ve been a fisherman for 20 years and I know False Bay in and out.”

Scalabrino ended the call and wondered what to do. Should he trust a random fisherman?

Long story, short, he did trust the fisherman’s advice. Scalabrino and Peter Bales took their two boats to Rooi Els and launched in a north-westerly direction, aiming for Muizenberg, with Landmeters swimming alongside.

The rest is history. Annemie Landmeters became the first person to swim across False Bay!

History, though, often forgets that shortly after Scalabrino judged that Landmeters had indeed passed this elusive middle current, and duly turned the boats west, as that Sunday afternoon diver had recommended, two huge great white fins cut, majestically, across his bow.

“We kept Annemie close to the boats, of course, but they showed no interest in the swimmer and they carried on down southwards, ” says Scalabrino.

But then the fog came up. Now, his engines had been giving him uphill all morning, and there was no such thing as GPS in those days. Tony Scalabrino quickly took a manual compass reading, before the fog descended completely.

On board his boat, he has a brand spanking new big toy – a direction finder that gives out longitude and latitude. Huge thing. He powers it up, and the state-of-the-art device warns that on the current trajectory, they’re going to miss Cape Point and hit Uruguay on the South American mainland. Starting to sweat a little now, Scalabrino turns to another machine he has  – a tiny, battered old radio locator which picks up the radio beacons on Cape Point. This old thing goes bip bip bip, beeeeep encouragingly, and proudly informs everyone that, no, they are bang on course for Cape Point. But which machine to trust!

He went with his trusty old radio gadget. And the compass reading he’d luckily snatched. “Hours later, when the fog lifted, it turned out we were right on course for the other side of False Bay, heading for Smitswinkel Bay!” Tony Scalabrino’s gut instincts were spot on!

Then the south-wester came up, and the boat started being swept, with its faulty engines, towards Miller’s Point. This wasn’t necessarily a problem, except that Whittle Rock lay in their path. Last week, the dailies had been full of a story about a great white biting the flippers off a diver at Whittle Rock.

What to do! In the end, Scalabrino’s boat engine gave up the ghost. The NSRI sent out a boat from Simon’s Town to assist him to shore, and the second skipper – Peter Bales – safely ushered Annemie Landmeters onto Miller’s Point, and into the history books. DM/ ML