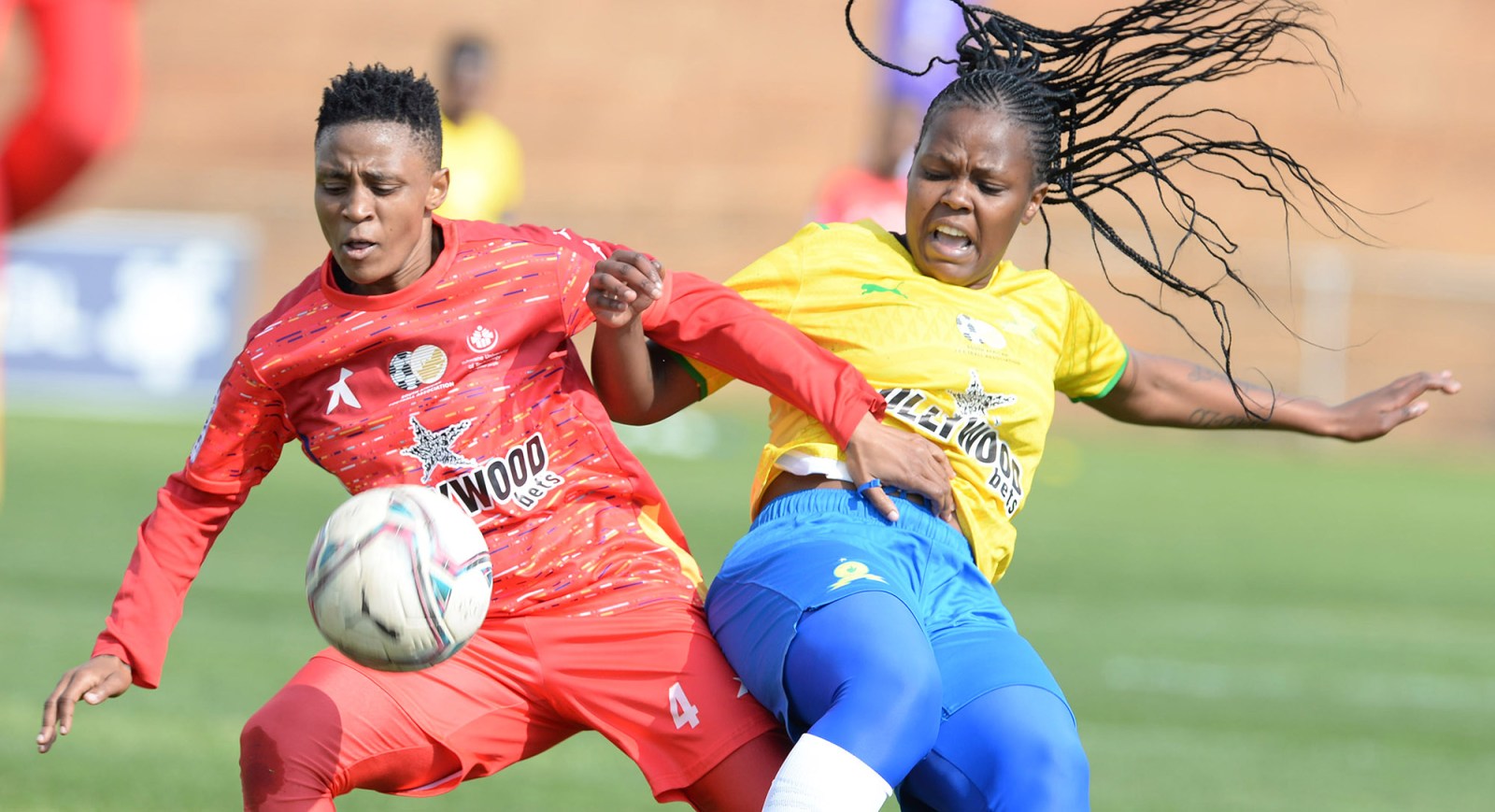 Jabulile Mazibuko of TUT FC and Boitumelo Rabale of Mamelodi Sundowns during a Super League match at Wits Stadium in Johannesburg on 22 May 2022. (Photo: Lefty Shivambu / Gallo Images)

Mamelodi Sundowns Ladies will launch the defence of their continental crown this weekend by attempting to scale the first hurdle in this endeavour – the Cosafa Women’s Champions League qualifier.

In 2021, Mamelodi Sundowns Ladies etched their names into the history books by becoming the first players to win the Caf Women’s Champions League, in its inaugural year.

Just under a year from that historic victory, the South Africans will begin their continental title defence by contesting the regional qualifier, which is organised by the Council of Southern Africa Football Associations (Cosafa) and will take place in Durban between 7 and 13 August.

Last season, Banyana Ba Style scored an incredible 22 goals across five games in these very qualifiers. They conceded just once. Those performances helped set the tone for success at the Champions League proper, in Egypt, where they were once again efficient on their way to the title.

Now the Tshwane giants are looking to extend their continental dominance into a second year as they go head-to-head with some of the finest teams on the continent.

First, Jerry Tshabalala’s team must overcome a hurdle, as they clash with some of the most impressive sides in southern Africa.

Masandawana are in Group A with Double Action Ladies of Botswana, who they beat 6-0 in last season’s group phase, as well as tournament debutants Costa do Sol from Mozambique.

“This is a very tricky draw for us because we find ourselves in a group that has a debutant from Mozambique. We have never had a chance to assess their strengths and they will be our opponents in the first game,” coach Tshabalala said.

“We have to rely on our strengths as a team because we believe in our philosophy and playing style that has earned us great success over the years.”

The Sundowns coach is also loath to underestimate the other side in Group A, despite how his side steamrolled them last time out.

“Yes, we came out on top last year against our opponents, but they may have changed a number of their personnel and players. I believe they have bolstered their team and I expect a different squad this time around,” said the long-time Sundowns mentor.

“We are not going to be complacent because we plan to work hard and treat each game as a final. Defending our title is the priority and we are ready for it.”

Sticking to the game plan

Tshabalala’s sentiments were echoed by goalkeeper Andile ‘Sticks’ Dlamini, who was integral to both Sundowns’ continental success in 2021, as well as Banyana’s in 2022 as they won their maiden Women’s Africa Cup of Nations (Wafcon) title.

“We are up against teams that are seeking to etch their names into the record books as well. At Mamelodi Sundowns, we stick to our game plan and pay close attention to the technical team. We are confident of our chances in Durban and our aim is to win,” said the Wafcon goalkeeper of the tournament.

“We are prepared and without fear of our adversary, but of course we have respect for the African champions. The motivation is great and the girls are determined,” said Costa coach Ismael Hagy.

All fixtures in the six-team tournament will be played at the Sugar Ray Xulu stadium in Clermont, and games will be broadcast on SuperSport, as well the SABC’s streaming platforms.

Fans attending the games will be able to enter for free, Cosafa has announced. They will be able to collect their tickets three hours before the kickoff of games, on a first come, first serve basis. These can be collected from the corner of Krause Road and 29th Avenue, outside the Sugar Ray stadium. DM