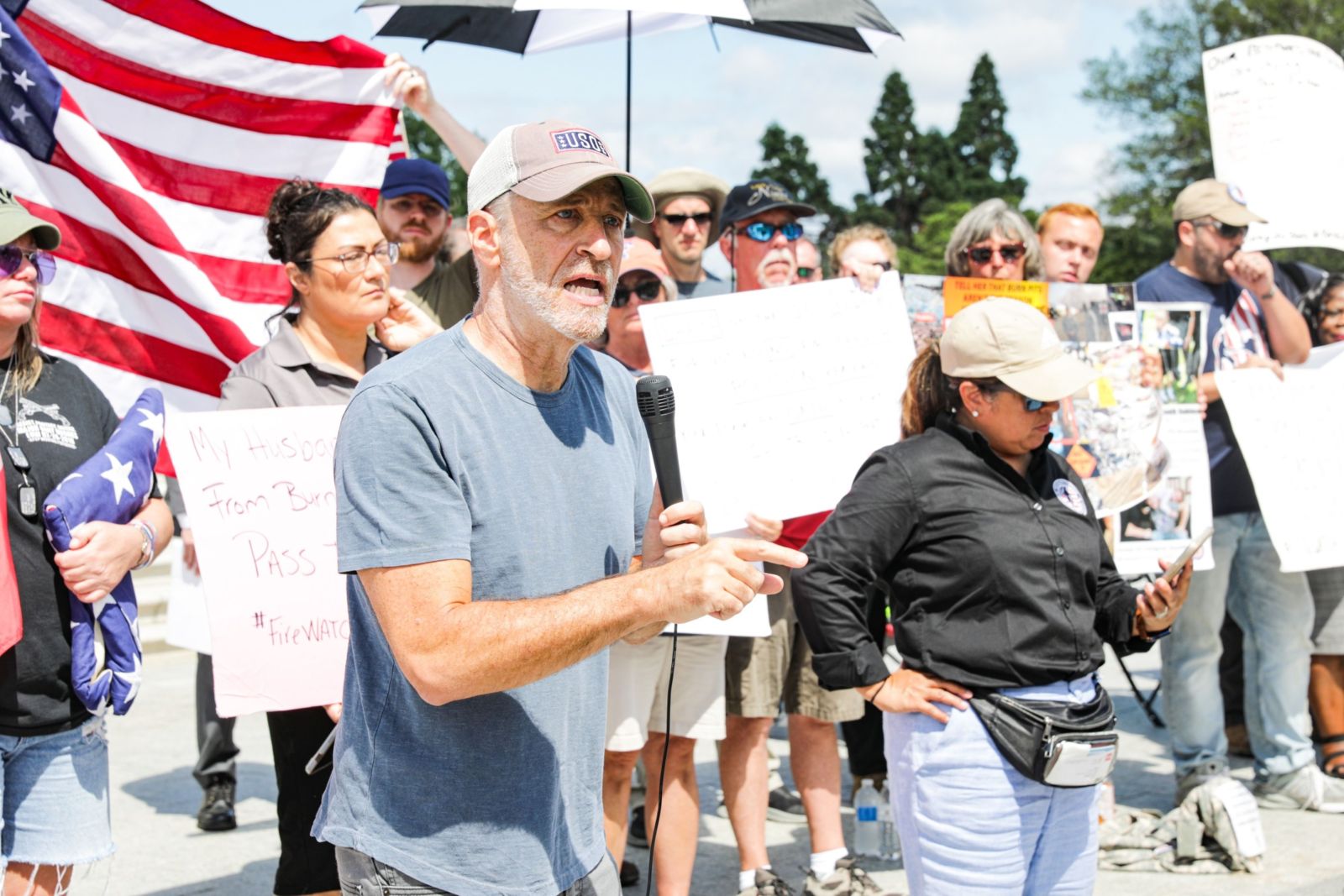 Activist Jon Stewart speaks outside the US Capitol during a protest pushing for Senators to pass new burn pit legislation Washington, D.C., US, on Monday, 1 August 2022. The US Veterans Affairs secretary yesterday expressed confidence the Senate has enough votes to pass a bill to provide health care and benefits to 3.5 million veterans exposed to toxic burn pits, even after Republicans stalled the legislation last week.

Legislation giving veterans exposed to toxic burn pits access to expanded health benefits passed the Senate on Tuesday night amid an outcry from veterans and comedian Jon Stewart, who camped out on the Capitol steps since Republicans blocked the bill last week.

The bill, passed on an 86-11 vote, ultimately drew support from 37 GOP senators, including Minority Leader Mitch McConnell. It now heads to President Joe Biden for his signature.

The legislation known as the PACT Act would expand veterans’ healthcare eligibility to about 3.5 million people exposed to toxic burn pits while serving overseas. The pits, used to burn fuel, chemicals, and other waste, have been linked to certain illnesses because of the toxins present in the smoke.

The US Veterans Affairs secretary yesterday expressed confidence the Senate has enough votes to pass the bill, even after Republicans stalled the legislation last week.

Beyond aiding veterans of Iraq and Afghanistan wars, the bill would also expand coverage for illnesses potentially linked to the Agent Orange herbicide used in the Vietnam War.

Senator Jon Tester, a Montana Democrat and the chair of the Veterans Affairs Committee, thanked the veterans who had stayed outdoors through a weekend of midsummer heat and heavy rain. “If you take a look at our military, the finest in the world, there’s a reason for that,” he said. “And that reason is these folks are willing to get the job done and they did.”

Twenty-five of those Republicans had supported another version of the bill last month. The GOP senators, including McConnell, denied that they changed their minds to retaliate against Democrats who had finally reached a deal after a months-long standoff.

The bill “is going to free up $400-billion underneath the spending caps that discretionary spending is subject to,” Toomey, a Pennsylvania Republican, said on Bloomberg Television. “It allows for a spending spree on unrelated things.”

Proponents of the measure, like Stewart, warned that Toomey’s proposed change would mean ailing veterans would have to lobby for funding in annual spending bills.

Toomey told reporters it was worth delaying the vote on the bill even if it did not change the final result in order to put “a spotlight on this terrible abuse in hiding behind veterans”. He voted no.

The Senate rejected Toomey’s proposed amendment to the bill as well as two others from Republican Senators Rand Paul of Kentucky and Marsha Blackburn of Tennessee before moving on to vote for passage.

Biden, who called for the legislation in his State of the Union address earlier this year, has spoken about the dangers of toxic burn pits for years.

“While we can never fully repay the enormous debt we owe to those who have worn the uniform, today, the United States Congress took important action to meet this sacred obligation,” he said in a statement on Tuesday evening. “I look forward to signing this bill, so that veterans and their families and caregivers impacted by toxic exposures finally get the benefits and comprehensive health care they earned and deserve.”

Last weekend, the president took part in a video call with veterans’ families gathered outside the Capitol. Biden said in a tweet that his most recent positive coronavirus test prevented him from visiting them in person, so instead he sent the protesters pizza.

The issue is personal for the president, who lost his son Beau to brain cancer. Beau Biden served in Iraq near burn pits, and Biden has suggested that the toxins from the pits may have caused the disease. BM