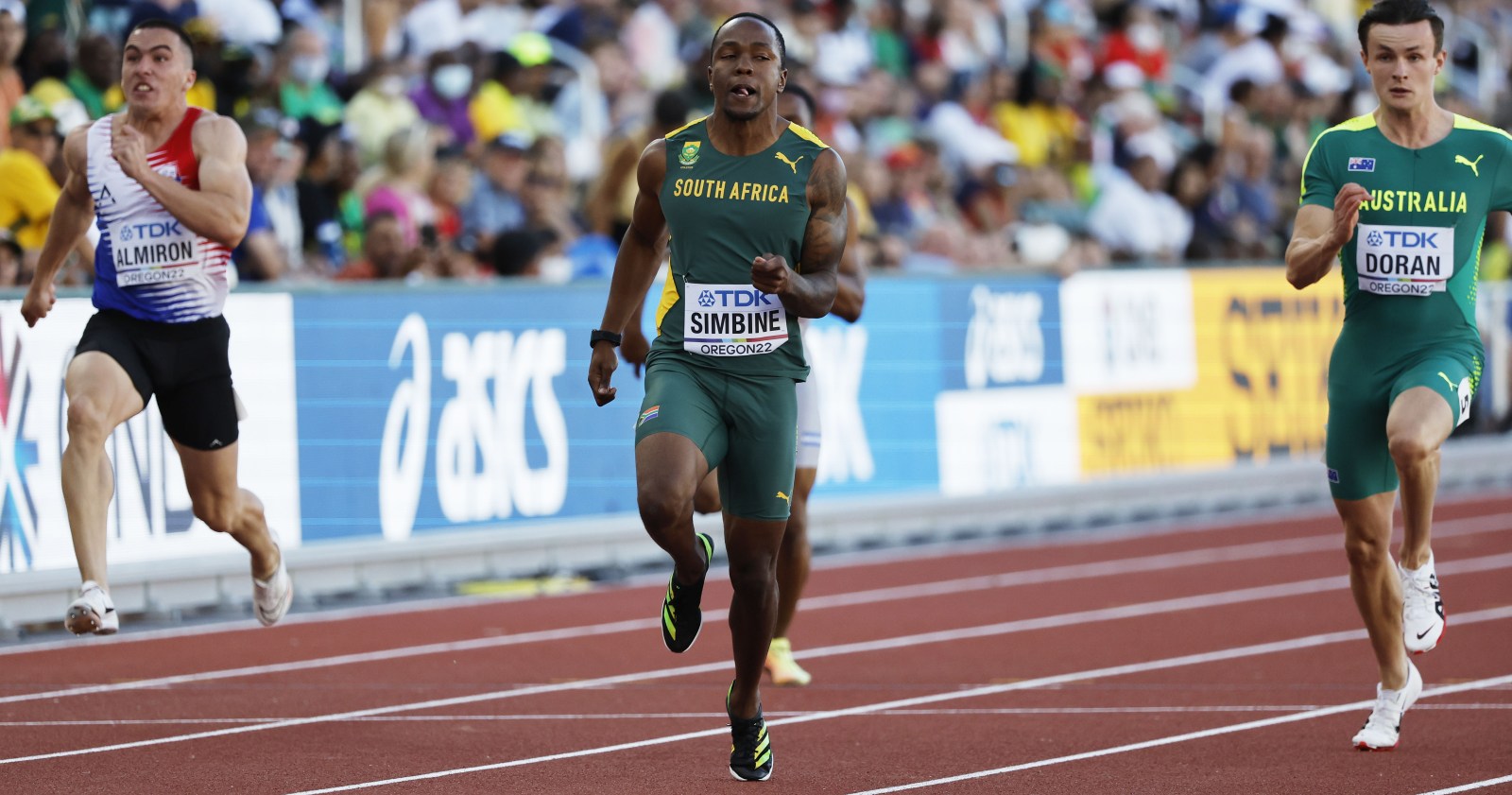 Akani Simbine of South Africa competes in heat 5 in the men's 100m at the World Athletics Championships Oregon22 at Hayward Field in Eugene, Oregon, US, 15 July 2022. (Photo: EPA-EFE/John G. Mabanglo)

Despite being one of South Africa’s most consistent performers in any sport, Akani Simbine feels under-appreciated.

The ‘fastest-ever’ list is headed by the incomparable Bolt and includes a who’s who of sprinting in Tyson Gay, Asafa Powell, Justin Gatlin, Maurice Greene and Christian Coleman.

Of those 16 on the list above Simbine, only a handful don’t have an asterisk next to their names. You know, the one which links them to that murky world of drug bans and smoking guns. And Simbine is one of those untainted, the ultimate clean machine. Simply put, he’s one of the finest sprinters the world has seen, and he’s been at the sharp end of his profession for a number of years now.

Yet, he remains one of the most unappreciated sports stars in South Africa. As he prepared for the defence of the 100m Commonwealth Games title in Birmingham, Simbine said that he has come to accept that he’s in the shadows when it comes to South Africans and their idols.

“I constantly have to remind myself that I’m not doing it for other people. It’s always an honour to represent South Africa at the Olympics, World Champs or Commonwealth Games, but even if I were to break the world record I don’t think anything would change in terms of recognition.

“Every year I perform well in the Diamond Leagues, the World Champs, the Olympics and I’m here in Birmingham as the Commonwealth Games 100m champion. But athletics doesn’t feature high up on South Africa’s sporting radar. They get excited every four years when it’s the Olympics but then it’s back to rugby, soccer, cricket, entertainment.

“I’m at a level where a lot less than 1% of people in the world can run that fast, but people don’t understand that. I always make the 100m final and I’ve finished in the top five of those finals since 2016.

“But, I feel I don’t get the appreciation, and have come to terms with it. Running fast is a gift that’s been given to me. One day I can win, the next day fifth, the next day third, the next day fourth. There are such small margins in the field that I play.”

Simbine is, by his own admission, a late starter to his unforgiving profession and he admits that he is still learning the trade at the age of 28.

“I’m still a young athlete. When I started I was thrown in the deep end, having to figure it out against the likes of Usain. I’ve been learning ever since. I’ve run a perfect race a handful of times, but not a lot. As much as I’m a consistent high-level sprinter, I do make mistakes. I need to get to a point where I don’t make a mistake.

“When in a race the muscle memory goes off. You go on autopilot when you’re running, your body is doing what you’ve imprinted on it through hundreds of hours of training and racing. If you miss a step, your brain reminds you of it and that’s time wasted. We can’t waste time. 0.01 seconds can be the difference between winning and losing.

“You know when you’ve made a mistake. At the last Olympics in Tokyo, I knew I’d messed up my race at the start.  At 25-30m I said, ‘I messed up, now I’m going to have to really fight, it’s going to be difficult’.

And fight he did, all the way to fourth. “The mistake can happen anywhere in a race, at the beginning, the end, 80m, 90m. It’s how lucky you are to be able to get back into your running and how good the field is. At the highest level the game is usually up, though.”

Simbine, who clocked 9.93 in the Tokyo final after producing a 9.90 in the semi-final, admitted that fourth place in a final like that hurts. A lot.

“I’ve experienced hurt before. In 2015, I just missed out on the final at the world champs, qualifying ninth when the top eight went through. In 2016 in Rio I finished fifth, but in Tokyo … coming fourth is like the first loser,” he said.

“First, second, third get medals, but fourth doesn’t get anything. Yes, you’re the fourth-fastest man in the world, but it does leave a bitter taste in the mouth.”

The South African has a quiet air of confidence and self-belief, but there’s not the visible swagger which is so common in the testosterone- and ego-driven world of men’s sprinting. Simbine bristles at any suggestion he’s a pushover.

“There’s a switch that needs to be flicked, and that normally happens for me when I’m warming up for a race. I’m a calm, chilled person, but when it comes to race time I need to be aggressive and explosive. I need to be the opposite of who I really am.

“You can’t arrive at a race soft, like a marshmallow. The intensity has to rise. For me, that happens when I start warming up. Once the warm-up starts, you’re going into war, a fight in the ring. Then, when you’re standing on the line your ego has to come out. You want to be king. You need to feed your ego and your ego wants to be fed.”

The undisputed king of the 100m was also the ultimate showstopper. When Usain Bolt arrived at the track it’s said that the crime rate in Jamaica dropped to zero, such was the effect he had on people. However, Simbine reckons that inside the men’s 100m ready room not too much has changed since the greatest retired in 2017.

“The atmosphere is not much different inside there,” he says. “It’s the same tense place. You still have the same people doing their thing. The big difference is inside the stadium.

“Usain brought a different atmosphere into the stadium. There was more excitement, everyone cheered for him. He just had his own thing going on. Now, there’s a different tide. Everyone in the stadium is still excited but all the athletes get cheered. It feels as if it has become a level playing field.”

Simbine arrived in Birmingham on the back of a fifth-place finish at the world championships in Oregon. Here he will expect to be on the podium and the mindset is Commonwealth Games gold.

“I’ve got the same plan as at Worlds last week. I’ll go in as hard as I can and execute perfectly. I need to make sure that I’m at 100% going into the final and I have to run a clean race.

“My expectations are such that in the major events anything outside of the top five is a terrible result for me, but I have been in the top five everywhere for years.

Still, despite the longevity and his history, Simbine feels as though each time he comes to a competition he has to prove himself all over again.

“Athletics is hard, it’s a very tough sport. Very lonely. When you stand on the start line you’re alone, everyone wants to take you down,” he says.

“And it doesn’t matter if I’m the fastest man in the field. The race itself determines everything. People forget what you’ve done leading up to the race. Every race we have to prove who is the fastest.

“I can win today and come third next week. Then I can come back and win again and finish fourth the following week. And people will say, ‘He’s inconsistent’.

“Then you win again and people say you’re the best. And despite me performing so highly at events like the world champs, the Olympics and Commonwealth Games since 2016, I have to prove myself all over again. In team sports, you’re not under that kind of scrutiny.”

And when he crouches down in the blocks for the 100m final he will feel the eyes of 30,000 spectators at Birmingham’s Alexander Stadium and millions others on TV watching the fastest man in the Commonwealth defending his crown, watching every twitch of his muscles. Can there be a lonelier, more exposed place in the whole of sport? DM