Rhino poaching on the rise, KZN focus of carnage while...

Rhino poaching on the rise, KZN focus of carnage while private sector turns the tide 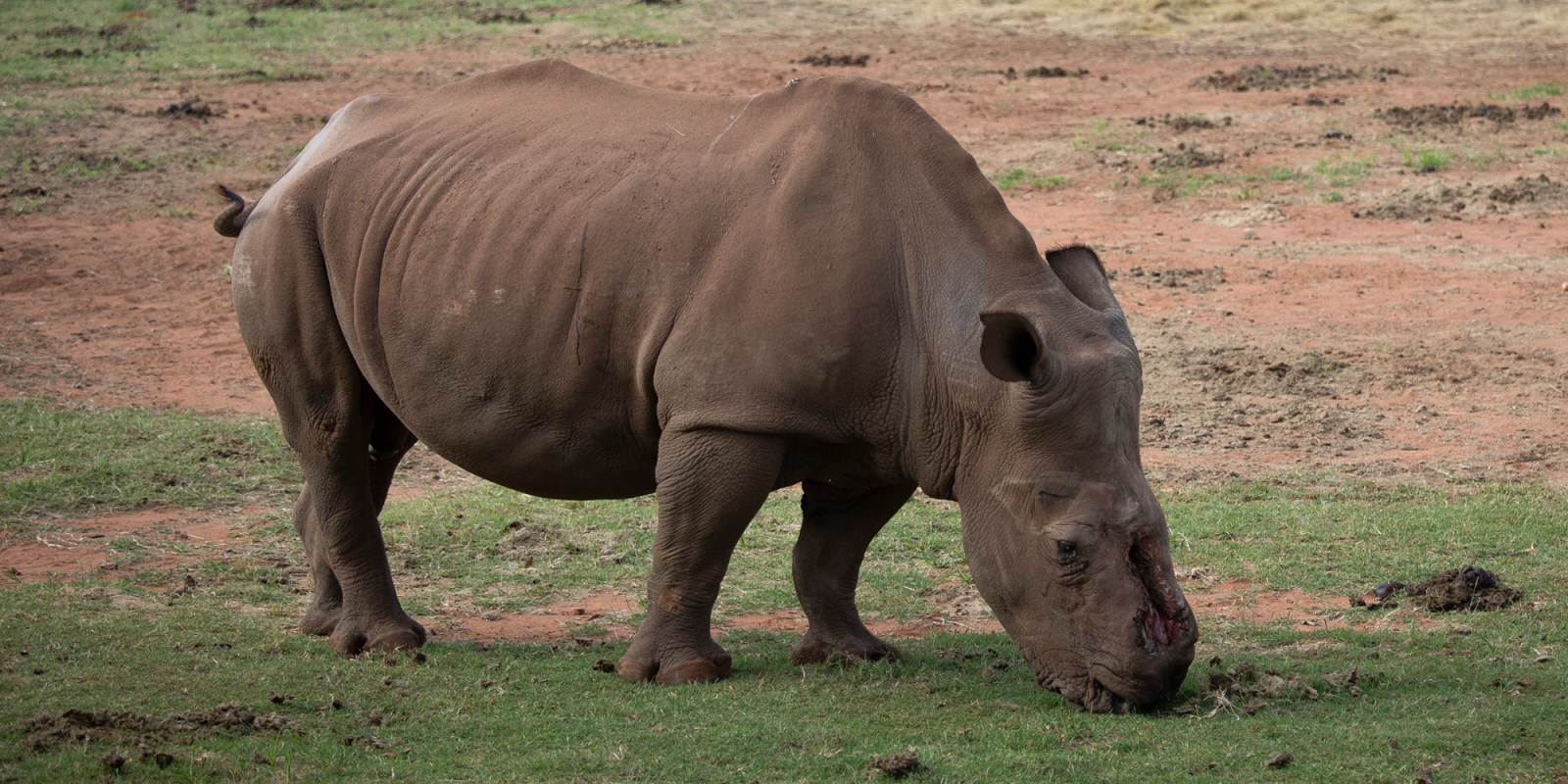 White rhino bull Seha, showing serious facial damage to his face, grazes in Bela Bela, South Africa on 24 January 2022, before his relocation to another nearby game reserve after recovering from serious facial wounds sustained when his horn was hacked off by poachers. (Photo: EPA-EFE / Kim Ludbrook)

In the first six months of 2022, 259 rhinos were known to have been poached in South Africa for their horns — 10 more than the 249 slain in the same period last year. Private reserves, which hold most of South Africa’s rhinos now, had fewer losses than last year, while KwaZulu-Natal has become the epicentre of the carnage.

The rhino poaching rebound from the initial Covid clampdown remains in place. The Department of Forestry, Fisheries and Environment (DFFE) said in a statement on Monday that 259 rhinos were known to have been poached in the year to the end of June — 10 more than last year over the same timeframe.

“Recent trends in rhino poaching show a move away from the Kruger Park to private reserves and KwaZulu-Natal where the majority of rhinos have been killed this year,” Environment Minister Barbara Creecy was quoted as saying.

KZN is certainly becoming the new poaching hotspot as rhino numbers decline in the Kruger National Park. Of the 259 rhinos killed illicitly in the first half of this year, 133 were downed in KZN.

As Daily Maverick reported earlier this year, Ezemvelo KZN Wildlife is in a state of ongoing failure — meaning state failure — weakened by political patronage networks that have seen untrained ANC “military veterans” given jobs as rangers.

The province’s rhinos are among the casualties. KZN also seems gripped in a general spiral of lawlessness that criminal syndicates can exploit. The riots of July 2021 are a case in point, while the provincial ANC is firmly in the hands of the “RET” faction which is hardly focused on battling crime and corruption, to put it diplomatically.

The data also highlights that while there was indeed a poaching shift toward privately owned rhinos in the past couple of years, the tide is turning back on that front. This time last year, the DFFE said that “… losses in private parks constituted 15% of the total reported loss in 2019, 9% in 2020 and 30% so far in 2021”.

A 30% loss in the first six months of 2021 would have translated into 75 rhinos poached on private reserves and game farms. According to Pelham Jones, chair of the Private Rhino Owners Association (PROA), for all of last year, 124 privately owned rhinos were killed out of a nationwide total of 451, or 27.5%.

In the first six months of this year, the ratio is 49 out of 259, or 18.9%. So the toll is mounting in KZN’s state-run parks, notably the flagship Hluhluwe-iMfolozi Park which, a century ago, was the last bastion for the white rhino.

But the tide is turning again in the private sector, despite the mounting costs of security to protect the herds.

“The private sector is much more responsive to threatened risk… If you come and start to steal my personal assets, I’ll be pissed off at you,” Jones said.

PROA now estimates that its members own about 8,000 rhinos, or roughly 60% of a shrinking national herd. Poaching is clearly one of the key factors behind this state of affairs — far more rhinos are getting whacked on state land than private land. In such a situation, one population is going to grow while the other will fall. Its basic biology and maths.

More widely, it highlights the continued failure of the South African state, which lacks the capacity and resources to effectively stem the slaughter and remains riven by corruption. Growing poverty and unemployment in a barely growing economy provide a virtually bottomless pool of poachers, while Asian demand for rhino horn and its bogus properties shows few signs of abating.

Meanwhile, government policy remains muddled. A high-level government panel recommended the phasing out of so-called “captive breeding operations”, or CBOs — which would presumably have included John Hume’s breeding project which has 2,000 white rhinos — but a recently-released white paper did not even include the term CBO. It contained loads of other buzz terms, but little in the way of substance.

Hume’s project is now trying to sell about 100 rhinos a year for “rewilding” purposes, but the South African government could not afford the price tag, and sending the animals to state-run reserves would just be manna from heaven for poachers.

One of the depressing things about the ongoing poaching crisis is that South Africa, outside the private sector, is simply becoming no longer a viable option for rhino conservation. South African rhinos have been translocated to places such as Rwanda, but the optics are terrible, as the Kigali regime is a sinister police state where human dissidents are at far more risk of coming to a sticky end.

Read in Daily Maverick: “Rwanda’s rhinos are safer than its dissidents”

Against this backdrop, circular and stale debates — such as whether to lift the decades-long ban on the trade in rhino horn — will persist. The relentless poaching in state parks suggests the ban is not working, but the South African government has signalled no intention of pushing to lift it.

One of the problems is that conservationists are divided among themselves, but all have the noble goal of preserving wildlife. When it comes to rhino conservation, private ownership at least seems to be working — the numbers speak for themselves.

Incentives, though, are lacking and will require some fresh thinking. DM/BM/OBP

Rhino poaching on the rise, KZN focus of carnage while private sector turns the tide