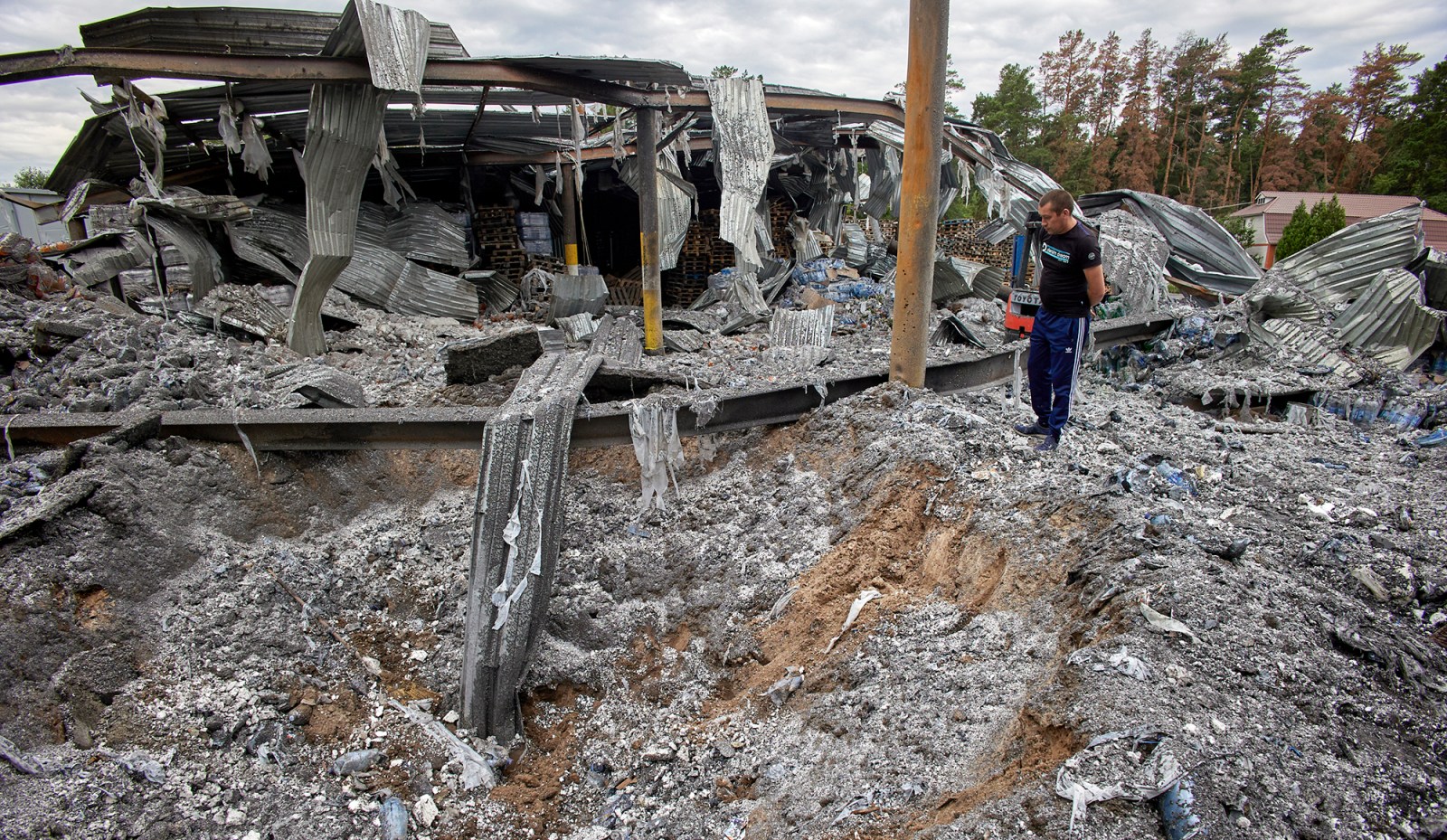 A man inspects a shell hole at a factory storage area damaged in a rocket hit near Chuhuiv, Kharkiv area, Ukraine, on 2 August 2022. Kharkiv and surrounding areas have been the target of heavy Russian shelling since February 2022. (Photo: EPA-EFE / Sergey Kozlov)

Ukraine began the mandatory evacuation of its citizens from Donetsk following president Volodymyr Zelensky’s call on civilians to leave the eastern region for their own safety.

The Kremlin announced that Russian President Vladimir Putin will meet Turkish leader Recep Tayyip Erdoğan for talks in the Black Sea resort of Sochi on Friday, including on the deal brokered by Turkey and the United Nations to unblock Ukraine’s grain exports.

Russia continued its shelling of the southern port of Mykolaiv, according to local authorities. Explosions were also heard in the Kharkiv region in the northeast. Around Donetsk, Russian forces were conducting an offensive in the Bakhmut and Avdiyivka sectors, Ukraine’s general staff reported, adding that its forces repelled a number of attacks. Russia was continuing to transfer troops to support defensive positions in southern Ukraine and may be halting its campaign around Slovyansk in the east, for the time being, the Institute for the Study of War said in its latest assessment. The withdrawal was likely to create an opportunity for Ukrainian forces to launch a counteroffensive, it said.

French far-right leader Marine le Pen called for Europe to end sanctions against Russia to avoid a “blackout, notably when it comes to gas imports”. Speaking during a press conference, she added that sanctions were “useless” as “the Russian economy isn’t on its knees” and “we are suffering much more from these sanctions than Russia is”.

Le Pen’s party, which made inroads in parliamentary elections earlier this year, has financial ties to Russia. It took out a loan from a Czech bank that was taken over by a Russian company in 2016. While she’s joined widespread condemnation of Russia’s war in Ukraine and tempered her enthusiasm for Vladimir Putin, she’s continued to advance views seen as pro-Russian.

Russia’s Supreme Court declared the Ukrainian Azov Regiment a terrorist organisation, state news services reported. The designation means fighters from the regiment who surrendered to Russia in May after a weeks-long siege at a giant steel plant in Mariupol could face terrorism charges.

Hundreds of Ukrainian defenders who held out in the strategic southeastern port city are being held by separatists in eastern Ukraine who have threatened to sentence them to death.

In a statement on its Telegram channel, the Azov unit called on the US State Department to designate Russia as a terrorist state.

Group of Seven foreign ministers issued a joint statement saying they continue to explore further measures to prevent Russia from profiting from the war, including by seeking solutions to reduce Russian revenues from hydrocarbons.

“We remain committed to considering a range of approaches, including options for a comprehensive prohibition of all services that enable transportation of Russian seaborne crude oil and petroleum products globally, unless the oil is purchased at or below a price to be agreed in consultation with international partners,” the ministers said.

G7 nations and the EU agreed at a summit in June to explore the introduction of a price cap on Russian oil.

More: How the EU will allow a slight increase in Russian oil exports

The UK has added former Rosneft management board members Didier Casimiro and Zeljko Runje to its sanctions list, according to a statement.

The first train from the area arrived on Tuesday in the city of Kropyvnytskyi in central Ukraine, mainly carrying women, children and the elderly, deputy prime minister Iryna Vereshchuk said on her Telegram channel.

Zelensky called for enforced evacuations from Donetsk at the weekend amid intensified Russian shelling and fears that it’ll be hard to survive the winter.

Three ships sailing under the Russian flag and a Syrian vessel have regularly been making illegal entries into Sevastopol sea trading port, the Prosecutor General’s office of Ukraine said on its website. In this way, the Crimean peninsula “is being used by the Russian Federation as a ‘grey zone’ to transport grain which they have illegally appropriated”, the office said.

Nato Secretary-General Jens Stoltenberg said he held a call on Tuesday with Ukrainian president Volodymyr Zelensky and the pair discussed priorities for military support for the government in Kyiv.

The vessels, which will be accompanied through the safe corridor by a mine-sweeper, have a capacity of between 10,000 tonnes and 60,000 tonnes, Taras Vysotskyi said in an interview with Ukraine’s 5th TV channel.

The governor of the region that includes Mykolaiv said local authorities were working toward possibly having the southern port added to the list of three shipping hubs that have been opened for grain exports.

While Odesa, Chornomorsk and Pivdennyi are coastal ports, Mykolaiv sits on the Pivdennyi Buh delta some 30km north of where the river flows into the sea. Russian forces have been regularly targeting Mykolaiv as it’s strategically important in the northern Black Sea area and stands in the way of a potential push into central Ukraine.

“It is good that a large majority of states have condemned Russia’s aggression and its signals regarding nuclear weapons,” Baerbock said in a speech on Monday at the UN. “Reaffirming this condemnation remains a matter of credibility for all those who support serious efforts toward nuclear disarmament.”

German Chancellor Olaf Scholz praised his Canadian counterpart for his “strong decision” to allow the shipment of turbines back to Europe that are crucial to the operation of a key Russian gas pipeline.

In an interview with The Globe and Mail newspaper, Scholz pushed back against criticism that Prime Minister Justin Trudeau had undermined Russian sanctions, and said releasing the turbines — which were undergoing repairs in Canada — eliminated a potential Russian excuse for cutting gas supplies.

Global corn, soybean and wheat prices extended their declines as US crop conditions came in better than expected and Ukraine prepares to gradually ramp up exports after the first shipment since Russia’s invasion left for Lebanon.

The first two weeks will be treated as a trial period, with no more than three vessels a day in each direction through new safe-passage corridors, Ukraine Infrastructure Minister Oleksandr Kubrakov told Bloomberg TV on Monday. If successful, exports could increase to as much as three million tonnes per month in four to six weeks’ time, he said. DM