No shelters or ‘safe spaces’ in Mitchells Plain, sa... 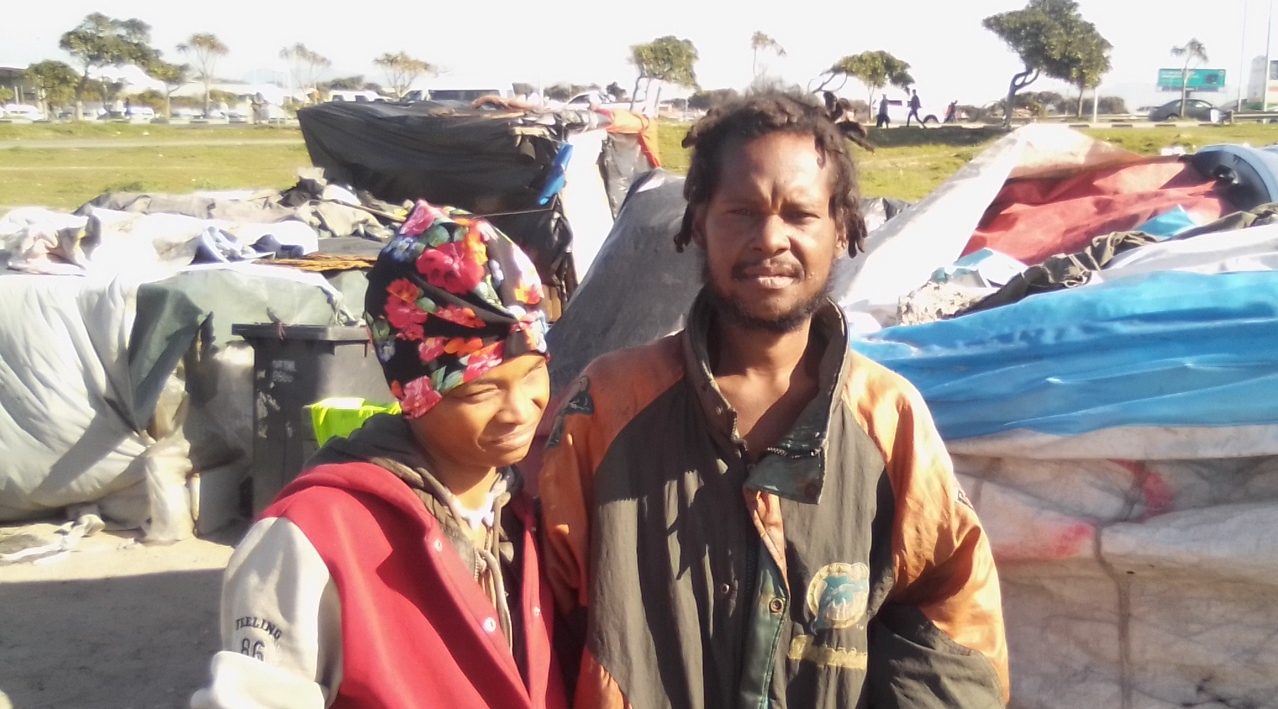 Business owners in Mitchells Plain are complaining about the increasing homelessness crisis.

Michelle Peterson is blind and she has been homeless for eight years. She is one of about 150 homeless people living in Mitchells Plain town centre, most in informal shelters built near the taxi rank beside the Mitchells Plain Day Hospital.

Peterson lives with her boyfriend, Niezaam Serious, in an informal shelter built from wooden pallets covered by black plastic bags to keep them warm during the cold winter nights.

She relies on asking for money and food at the nearby traffic lights. “Life on the streets is tough. It’s the survival of the fittest,” she told GroundUp.

Peterson said that she won’t go to a shelter because she would be separated from her boyfriend.

“He helps me a lot with many things and the idea that we would be separated and placed in different shelters does not sit well with me. I will not survive without him,” she said.

Western Cape Department of Social Development spokesperson Esther Lewis said the provincial department funds 37 shelters with 2,308 bed spaces for adults at a cost of R29-million a year across the Western Cape. The funding includes paying for a social worker at each of the shelters, who assesses individuals and develops an intervention plan, which may include reunification services and psychosocial support.

There are no homeless shelters or “safe spaces” in Mitchells Plain. Mayoral committee member for community services and health Patricia van der Ross said, “The City is prioritising the investigation into additional safe spaces. The final decision will be based on need and evidence obtained through the investigation.”

A recent study on the cost of homelessness in Cape Town estimated that there were over 14,000 people living on the city’s streets.

According to local business owners, homelessness has spiralled in Mitchells Plain over the past few years. They say homeless people litter, vandalise properties and can be aggressive towards them.

A Mitchells Plain resident, Edward Jacobs, said homelessness in the area was becoming a huge problem.

“Open spaces and public places are occupied by the homeless and the centre has become dirty as a result. When you walk into the town centre it looks like a slum. Government needs to do something about this problem. Even though we sympathise with the homeless, we can’t ignore that it is wrong to build shacks in the CBD,” said Jacobs.

Fadwah Michelle has been living on the streets for almost ten years. She lived in central Cape Town and Bellville before moving to Mitchells Plain about two years ago.

“I have been arrested and put in jail five times … The more I get into the jail system, the more I come out worse than before,” said Michelle.

According to Van der Ross, the City’s Street People Programme Unit in Mitchells Plain has regular interactions with persons found on the streets and provides shelter placement, reunification with family, referrals to substance abuse programmes, clinics and social services. She said there were also short-term work opportunities through the Expanded Public Works Programme.

City spokesperson Janine Willemans said a total of R142-million has been allocated to operate shelter facilities over the next three years. She said a further R10-million was allocated this winter to expand shelter beds at NGO-run shelters.

Before structures belonging to the homeless are taken down, Willemans said, “The City will acquire the necessary court order and ensure alternative accommodation at shelters or safe spaces has been offered, where this is just and equitable.

“The City would like to see the courts ordering rehabilitation, rather than opting for punitive measures such as fines or imprisonment. No person should live on the streets (as) this is unsafe, unhealthy, and undignified,” said Willemans.

“No person has the right to reserve a public space as exclusively theirs, while indefinitely refusing all offers of shelter and social assistance. It is not an offence to sleep on the streets if you do not have a choice. Only after refusing offers of shelter and social assistance should the law take its course as a necessary last resort deterrent for the sustainable management of public places,” she added.

“There is not enough shelter accommodation in any part of the city to house all the people facing homelessness — Mitchells Plain is no exception,” he said.

“Enough shelter beds will not actually solve the problem, because the majority of people living on the streets now do not want to go into the shelter system. The shelter system can also be a dead end for many people unless they get assistance with the challenges that landed them on the streets in the first place or kept them there. These include relationship breakdowns, addiction, unemployment, gang involvement and mental health.”

“The City of Cape Town is probably the most proactive City in South Africa when it comes to homelessness, but a lot more that needs to be done. Vast sums of money are spent each year and yet the problem is getting worse — often because the interventions do not facilitate long-term rehabilitation or have trackable outcomes.

“Too much money is spent on relief efforts, reactive measures and managing the immediate situation, while very little is spent on long-term development, rehabilitation and solving the causal factors,” said Knighton-Fitt.