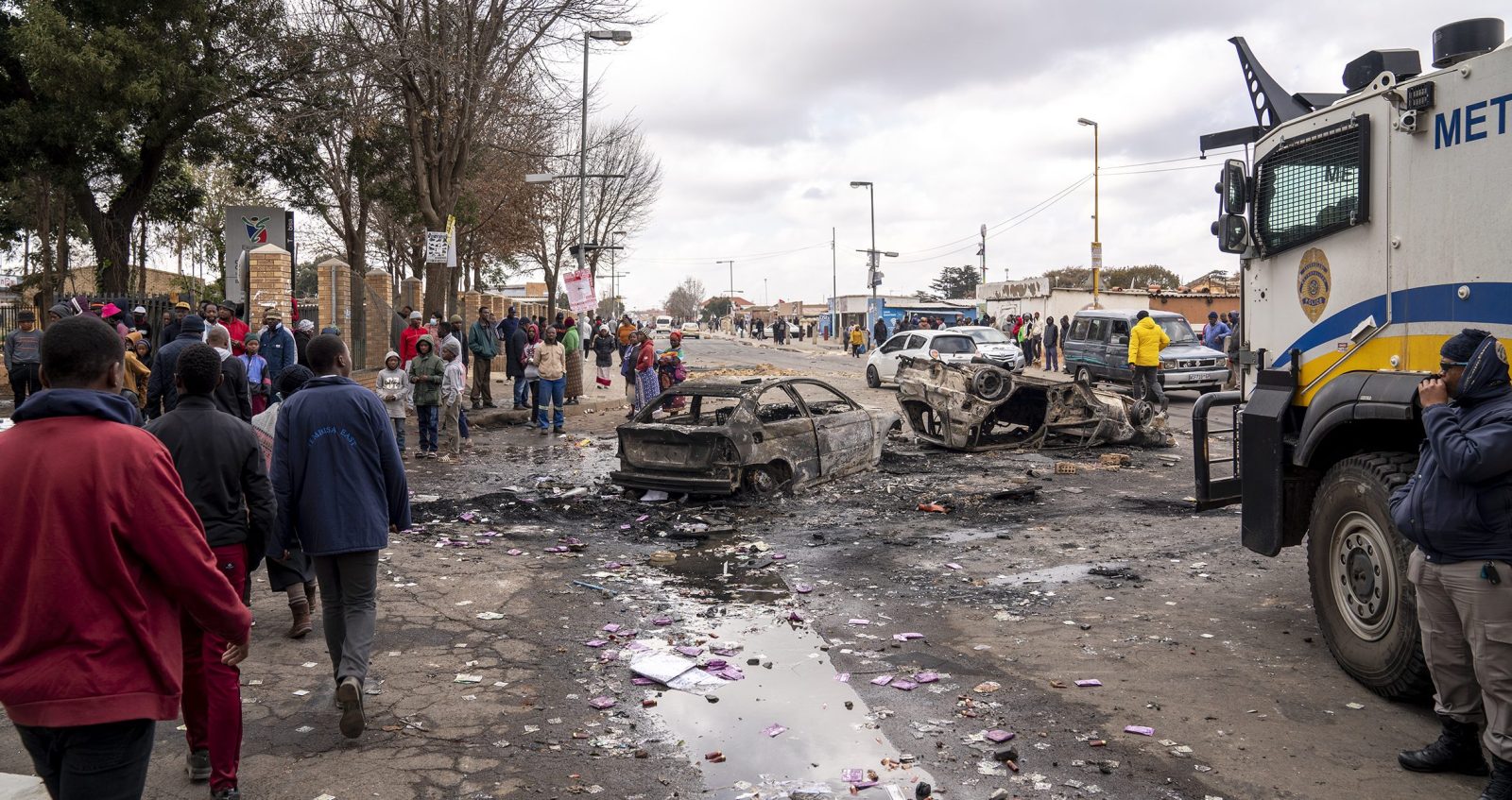 Burnt cars a day after violent protests on 1 August rocked the Ekurhuleni township of Tembisa in an electricity protest that claimed the lives of four people. (Photo: Shiraaz Mohamed)

Tensions remained high in Tembisa on Tuesday after riots on Monday that claimed at least four lives and caused extensive damage to infrastructure.

A strong contingent from the Ekurhuleni Metropolitan Police Department stood against the backdrop of the charred Tembisa Community Civic Centre. Fragments of computer screens, keyboards, printers and other office machinery littered the grounds.

Near the gates of the civic centre, a grey jersey and a tattered white vest lay in a pool of blood. Rubber bullet casings of different colours formed a carpet on the ground. The ATMs inside the civic centre were damaged, and according to some residents, money was taken from them.

The deployment of the metro police officers came after a volatile 48 hours in Tembisa during which at least four people died and extensive damage was caused to infrastructure.

On Monday, protesting against what some called unreasonable electricity and water tariff hikes, residents of Tembisa blocked roads leading into the area with burning tyres, stones, bricks, tree trunks and even uprooted traffic lights and streetlight poles.

Residents said their water and electricity rates had increased. They said they had received an electricity subsidy of R100 at the beginning of every month and that their water had also been subsidised, but that this had been stopped by the new DA administration in Ekurhuleni led by mayor Tania Lynette Campbell, who took over from the ANC’s Mzwandile Masina.

“The poor were allowed to pay less money, but the DA cut that off,” said Sibusiso Dlamini from Enxiweni, Tembisa. “The rates changed when the DA came to power.”

At least 31 cars were damaged or torched, and four tractors were burnt at the civic centre. The owner of one of the burnt cars, Moona Mashele, said: “On Sunday, one of the security guards advised me to park my car towards the back because the community threatened the place. I didn’t take him seriously.”

Mashele said community members overpowered security guards to gain access to the civic centre. He said there were no police at the scene at the time. “I’m devastated, more so because my car was not insured,” said Mashele.

Other losses were to the community itself. Asked what impact the torching of the civic centre would have on the community, Mmoko said: “We will have to redirect customers to other customer centres.”

This could mean the community will have to travel longer distances and pay higher travel costs to access the same services.

Many traffic lights were brought down and used to barricade roads. Street signs and streetlight poles were also felled to block roads. Fires burnt on the roads until Tuesday afternoon.

Mmoko said the damage could not be exhaustively assessed yet, because: “The situation was volatile. Just by the look of the burnt buildings and the cars, we are looking at millions of rands of damage.

“These were just acts of criminality.”

He said while some of the residents’ demands raised important issues which warranted investigations, the demand for a R350 flat rate for electricity was impossible to meet.

At least four people were confirmed dead as a direct result of the mayhem in the area from Sunday to Monday.

One of the dead, Linda Shabalala (52), was shot by what family and friends claimed was a “traffic officer” at the height of the violence on Monday.

“(He) just came up and shot at the man while he was in the yard. We are deeply traumatised because we saw what happened,” claimed Masinga.

The family said they had opened a case against the alleged shooter and police were investigating it.

“We want justice to take over. This guy must be arrested because it seemed he planned to kill him,” Masinga alleged.

“This guy first pointed the gun at me and my sister’s child and I said, ‘shoot’,” said Mkansi.

“We were leaning against this wall in the yard when he came in. He ordered us to move but we told him, we are in our yard, where should we go? Linda was taking pictures and then he shot him at close range.”

Masinga’s sister, Shirley Mkansi, said Shabalala was a good person who bothered no one.

“He had been staying with us for three months and he was a very handy person,” said Beverley Masinga, Shabalala’s landlord in Tembisa.

Independent Police Investigative Directorate (Ipid) spokesperson Lizzy Suping told Daily Maverick: “We can confirm that Ipid is investigating the deaths of civilians allegedly by the police in Tembisa. Ipid investigators have reconstructed the scene and interviewed some of the community members who were part of the protest action on Monday, 1 August 2022.”

Tembisa resident Thoko Mokoena said the community was trying to fulfil their obligations to the city, but the city was not making this any easier.

“They must allow the R350 flat rate and bring back the water and electricity subsidies,” she said.

Mayor Campbell is expected to visit the community on Friday when she will respond to residents’ grievances, said Mmoko.

In a statement on Tuesday, the Gauteng MEC for Human Settlements, Urban Planning and Cooperative Governance and Traditional Affairs, Lebogang Maile, said he would visit the area on Wednesday.

“The visit is prompted by recent volatile and violent service delivery protests in the area,” the statement read. Maile will also visit the families of those who died in the violence.

Ekurhuleni metro police said they were keeping a watchful eye on the area to prevent any flare-ups of violence.

“The situation has drastically calmed down, but we will continue to monitor the entire area to ensure that there are no flare-ups,” said Ekurhuleni metro police spokesperson Chief Superintendent Kelebogile Thepe. DM

This article was updated at 9.20am on 3 August 2022 to include comment from the Independent Police Investigative Directorate.