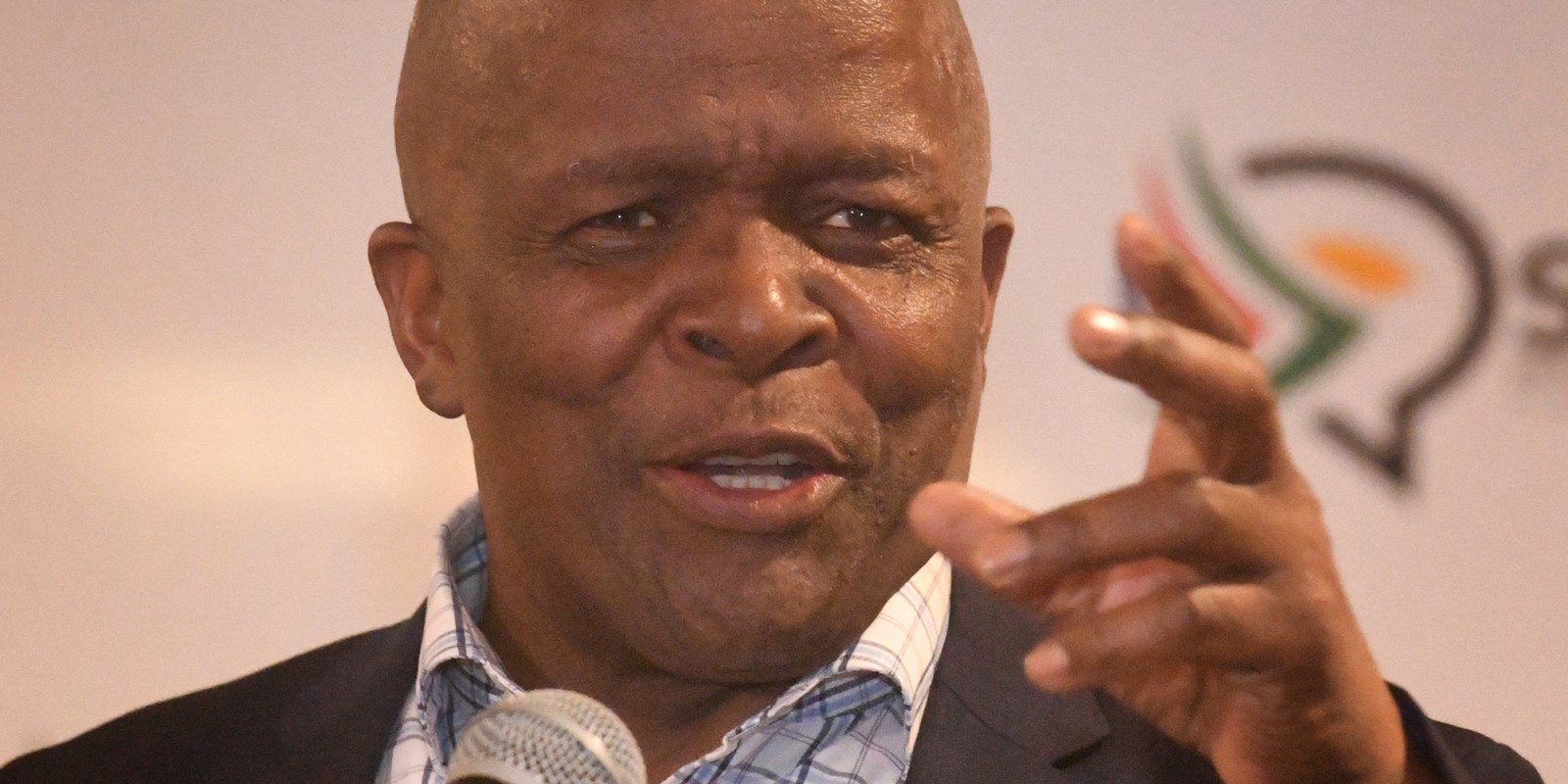 Mondli Gungubele, Minister in the Presidency speaks during an evening of conversation with the Presidency at Sanctuary Mandela on 1 August 2022 in Johannesburg, South Africa. The event was hosted by the South African National Editors' Forum (SANEF). (Photo: Gallo Images / Sydney Seshibedi)

Minister in the presidency responsible for State Security, Mondli Gungubele fiercely defended the President on Monday evening. He characterised the President as someone with high morals and as respectful of the law and urged attendees to allow the investigation into the high-profile theft case to unfold.

Minister in the Presidency Mondi Gungubele said President Cyril Ramaphosa was “itching” to speak about the Phala Phala matter but could not do so due to the pending police investigation into the matter.

“The moment where you are confronted with legal questions that are not homogenous, there are moments where you are confronted with questions which have signs of entrapment. Those questions are very careful when dealing with them. Because you may answer a question in the midst of something you do not know. As personal if there is, okay, then you know, what to call in your absence? That’s why I understand what the President says, ‘I was ready to express my views’, but I will advise you that I take it easy until investigations are done. And so the whole matter  is clear.”

Addressing journalists at a dinner engagement with the presidency convened by the SA National Editors Forum, Gungubele further batted for the president and mentioned how he had dealt with previous legal battles without interfering. Ramaphosa has been in court over the bank records of his 2017  ANC presidential campaign — where he was accused of vote buying.

“This president, you know, he’s been confronted with legal questions taken to court on a number of issues. He’s never dilly-dallied. He’s never even said this conspiracy, even when vindicated by the courts. He never said I told you so, everything he has done, has demonstrated that he respects the Zondo Commission put online without editing, put it online without the Special Investigations Unit (SIU) column saying my respect for the president is based on what I know, not what is going to come up with investigations, which I don’t know,” he said.

The former spy boss claims that large undisclosed sums of US dollars were unlawfully removed by burglars from Ramaphosa’s premises. He then accused Ramaphosa of concealing what happened at the farm instead of reporting the matter to the police. Fraser accuses the president of having unlawfully instructed the head of the Presidential Protection Unit Wally Rhoode to investigate it. Ramaphosa is alleged to have paid suspects, including his domestic workers, R150,000 each to not reveal that they had been kidnapped and interrogated.

Recent reports have, however, suggested that Rhoode has denied some of the allegations. Rhoode’s affidavit to the Public Protector’s offices says that he was not involved in the kidnapping or torturing or paying bribes to the alleged culprits in order to buy their silence.

Ipid to probe misconduct of police in Phala Phala matter

The Independent Police Investigative Directorate (Ipid) on 2 August 2022, confirmed that it would probe the alleged misconduct of the police officers who were involved in the case.

“Ipid will probe the alleged conduct of the police officers in terms of the SAPS regulation while the Hawks is investigating the criminal element by the SAPS officials which includes amongst others, defeating the ends of justice and kidnapping. Ipid will pronounce on the outcome when the investigation is complete,” according to a statement by Ipid spokesperson Lizzy Suping.

This comes after the African Transformation Movement (ATM) submitted a detailed statement which was in line with their request for Ipid to investigate the matter.

“After an in-depth analysis of the ATM party request to investigate the alleged conduct of the police regarding the Phala Phala Farm matter, Ipid has established that the complaint from the party was based on the statement of Mr Arthur Fraser, which has been circulating in the media space. The same complaint is under investigation by the Hawks and the directorate is in constant contact with the team from the Hawks that is assigned to probe the same allegations,” the statement read.

Zungula then highlighted the involvement of other key figures as mentioned in reports by News24. Presidential Protection Unit head Wally Rhoode — who is said to have worked with then Crime Intelligence boss Peter Jacobs — as well as high-ranking officials and the Special Task Force were also covertly investigating the matter. DM