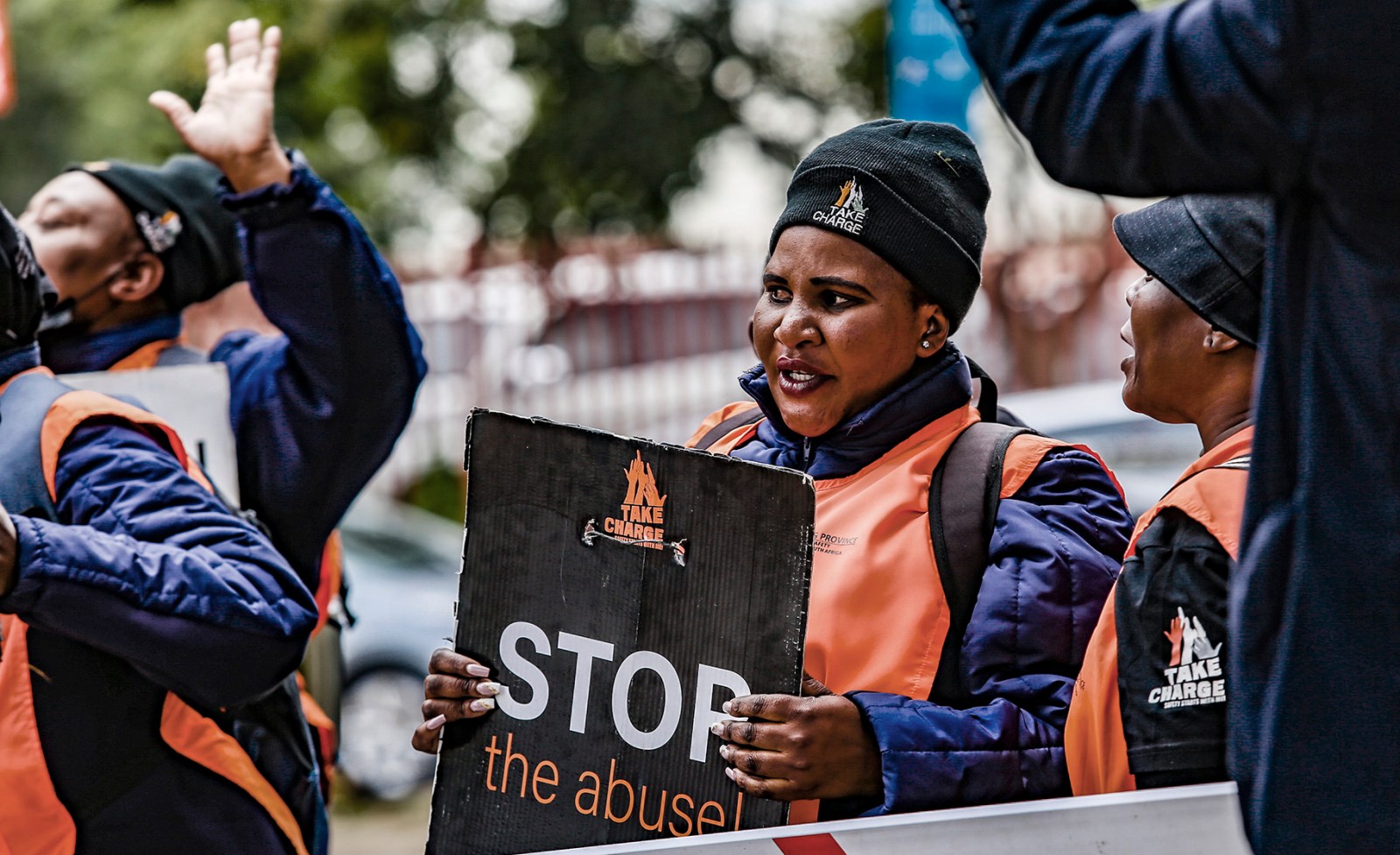 The NGO Take A Change protests against gender-based violence and and femicide outside the Palm Ridge Magistrates’ Court on 16 March 2022. (Photo: Gallo Images / OJ Koloti)

South Africa knows violence very well. The majority was violently oppressed by the apartheid government, with a struggle for freedom, characterised by petrol bombs and necklacing and a contested birthing of democracy where people were regularly thrown off moving trains and massacred with pangas. Today, stray bullets hit unintended targets during gang violence, service delivery protests are met with often fatal responses from the police and gender-based violence is rife.

According to the World Population Review South Africa ranks ninth in the world when it comes to murder, fourth for rape and ninth for robberies. Countries in conflict areas such as Syria, Somalia and South Sudan have a lower murder rate than we do.

As we prepare to observe Women’s Month, the latest crime statistics show that contact crimes, including assault and sexual offences, jumped 15%, with violent crimes including murder, assault and sexual offences also recording double-digit growth. According to the South African Police Service, 6,083 people were murdered during the quarter (up 22%) – that’s 68 people a day – the highest number recorded over this period in the past five years. Attempted murders were up 25%, with the police tracking 5,717 cases. Sexual offences increased by 13.7%.

Of course, the violence we experience in disproportionately affects women, with high rates of femicide and sexual assualt. According to research by Oxfam, one in three women will experience physical or sexual violence in her lifetime – a worrying statistic. Much of this violence is attributed to harmful social beliefs such as that women are meant to be submissive and if not, men have a right to assert coercive control, the normalisation of sexual harassment and men’s entitlement to sex with a woman, and a man’s right to discipline a woman. South African Human Rights Commission research too has shown the prevalence of these attitudes and how they perpetuate violence against women.

The Institute for Security Studies (ISS) has called for a murder-reduction stategy and attributed the high murder rate to a “combination of factors such as socioeconomic deterioration, urbanisation, increased inequality, declining police performance and high levels of police corruption. A main driver of murder in many areas is the availability of illegal firearms, which is often interlinked with organised crime networks.”

The ISS has identified that South Africa’s murder rate is highest in the Eastern Cape, Western Cape and KwaZulu-Natal, and that in “39% of cases (where police could establish a motive), the cause could be attributed to arguments and misunderstandings, often between acquaintances or relatives. This is a testament to how normalised violence is in everyday life. The second-most common circumstance in which murders were committed was during a robbery (19%).

“Given the frustration levels in high-crime communities, it is not surprising that vigilantism was the third-most noted cause at 15%. Murders attributed to gangs, taxi conflict and illicit mining violence together made up 18%.”

Under-resourced police services – the available number of policemen per community, vehicles not working and police stations being attacked – is an aggravating factor for the unabated violence. However, what these statistics show is that South Africa’s crime is structurally and culturally driven, so interventions other than punitive measures are required.

South Africa’s national crime-prevention strategy needs to focus on the social drivers of the high levels of violence we experience and look to alternative instruments of conflict resolution such as “restorative justice” and not just retributive measures, which are not working.

Restorative justice emerged as a strategy in South Africa during the Truth and Reconciliation Commission (TRC), which dealt with the violent atrocities perpetrated by the apartheid government. According to experts, Mike Batley and Anneke Scheepers, restorative justice “aims to repair the harm caused by crime. When victims, offenders and community members meet to decide how to do that, the results can be transformational. Restorative justice emphasises accountability, making amends, and – if they are interested – facilitated meetings between victims, offenders and other persons.” Unfortunately, the TRC process was arrested and so was the strategy. Now would be a time to review it.

Our societal conditioning and thinking need to be adjusted to undo the damage that our culture of violence is sowing. We need to all agree on the shared values we would like to ascribe to and how we work collectively towards that or face another groundhog day when the police minister updates us on our crime statistics. DM/MC