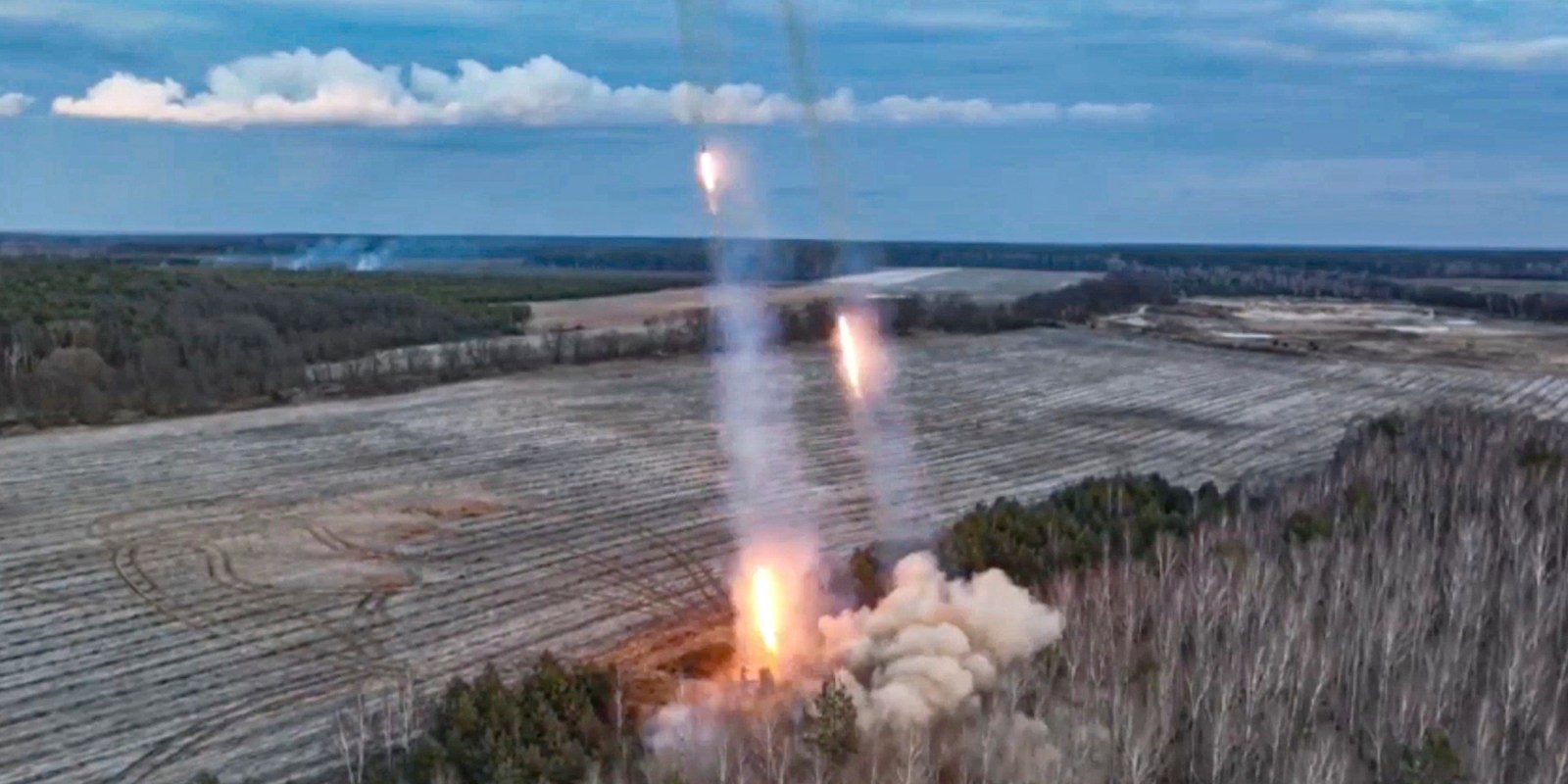 A handout still image taken from handout video provided by the Russian Defence ministry press-service shows Russian multiple launch rocket systems Hurricane during battles in Ukraine, 21 July 2022. The servicemen of the Central Military District units marched to firing positions and, after receiving coordinates from unmanned aircraft, launched a missile attack on the positions and field warehouse of the Armed Forces of Ukraine, where US-made M777 howitzers were based. (Photo: EPA-EFE / Russian Defence Ministry Press Services / Handout)

KYIV, July 31 (Reuters) - Russian missiles pounded the southern Ukrainian port city of Mykolaiv on Sunday, killing the owner of a major grain exporter, while a drone strike on Russia's Black Sea naval base in Sevastopol was launched from within the city in a "terrorist attack," a Russian lawmaker said.

Oleksiy Vadatursky, founder and owner of agriculture company Nibulon, and his wife were killed in their home, Mykolaiv Governor Vitaliy Kim said on Telegram.

Headquartered in Mykolaiv, a strategically important city that borders the mostly Russian-occupied Kherson region, Nibulon specializes in the production and export of wheat, barley and corn, and has its own fleet and shipyard.

Mykolaiv’s Mayor Oleksandr Senkevych described the more than 12 missile strikes as “probably the most powerful on the city in five months of war, hitting homes and schools, with at least three others wounded. On Sunday evening he reported that strikes had resumed, but no information on casualties or damage was available.

He blamed the attack on Ukraine, saying it had decided to “spoil Navy Day for us.” Read full story

Reuters could not independently verify the battlefield reports.

But Olga Kovitidi, a member of Russia’s upper house of parliament, told the Russian RIA news agency that the attack was “undoubtedly carried out not from outside, but from the territory of Sevastopol.”

“Urgent search operations are being conducted in the city to track down the organisers of this terrorist act. They will be found by the evening,” Kovitidi was quoted as saying.

The Sevastopol attack coincided with Russia’s Navy Day, which President Vladimir Putin marked by announcing that the navy would receive what he called “formidable” hypersonic Zircon cruise missiles in coming months. The missiles can travel at nine times the speed of sound, outrunning air defenses. Read full story

Putin did not mention the conflict in Ukraine during a speech after signing a new naval doctrine which cast the United States as Russia’s main rival and set out Russia’s global maritime ambitions for crucial areas such as the Arctic and in the Black Sea.

Ukrainian President Volodymyr Zelenskiy described the death of grain tycoon Vadatursky, as “a great loss for all of Ukraine”. Zelenskiy added that the businessman — one of Ukraine’s richest with Forbes estimating his 2021 net worth at $430 million — had been building a modern grain market with a network of transhipment terminals and elevators.

“It is these people, these companies, precisely the south of Ukraine, which has guaranteed the world’s food security,” Zelenskiy said in his nightly address. “This was always so. And it will be so once again.”

He added that Ukraine’s social and industrial potential, “our people, our capabilities, are surely more powerful than any Russian missiles or shells.”

Elsewhere in Ukraine, Russian forces shelled the Sumy northern border seven times, with more than 90 individual strikes, the Sumy Governor Dmytro Zhyvjtsky said on his Telegram channel. A farm was damaged and 25 hectares (61.8 acres) of wheatfields were destroyed, he said.

Up to 50 Grad rockets hit residential areas in the southern city of Nikopol on Sunday morning, Dnipropetrovsk Governor Valentyn Reznichenko wrote on Telegram. One person was wounded.

Putin sent tens of thousands of troops over the border on Feb. 24, setting off a conflict that has killed thousands, uprooted millions and deeply strained relations between Russia and the West.

The biggest conflict in Europe since World War Two has also stoked an energy and food crisis that is shaking the global economy. Both Ukraine and Russia are leading suppliers of grain.

HARVEST COULD BE HALVED

Zelenskiy also said on Sunday the country may harvest only half its usual amount this year due to the invasion.

“Ukrainian harvest this year is under the threat to be twice less,” suggesting half as much as usual, Zelenskiy wrote in English on Twitter. “Our main goal — to prevent global food crisis caused by Russian invasion. Still grains find a way to be delivered alternatively,” he added.

Ukraine has struggled to get its product to buyers via its Black Sea ports because of the war.

But an agreement signed under the stewardship of the United Nations and Turkey on July 22 provides for safe passage for ships carrying grain out of three southern Ukrainian ports.

There is a high possibility that the first grain-exporting ship will leave Ukraine’s ports on Monday, a spokesperson for Turkish President Tayyip Erdogan said on Sunday. Read full story

Zelenskiy said on Sunday that Russia has been transferring some forces from the eastern Donbas region to the southern Kherson and Zaporizhizhya regions.

“But that won’t help them there. None of the Russian strikes will go unanswered by our military and intelligence officers,” he added.

But Zelenskiy said on Saturday that hundreds of thousands of people were still exposed to fierce fighting in the Donbas region, which contains Donetsk and Luhansk provinces and which Russia seeks to control completely. Swathes of the Donbas were held before the invasion by Russian-backed separatists.

Russia said on Sunday it had invited U.N. and Red Cross experts to probe the deaths of dozens of Ukrainian prisoners held by Moscow-backed separatists.

Ukraine and Russia have traded accusations over a missile strike or explosion early on Friday that appeared to have killed the Ukrainian prisoners of war in the front-line town of Olenivka in eastern Donetsk.

The International Committee of the Red Cross (ICRC) on Sunday condemned the attack and said it had not yet received permission to visit the site, while adding it was not its mandate to publicly investigate alleged war crimes. Read full story