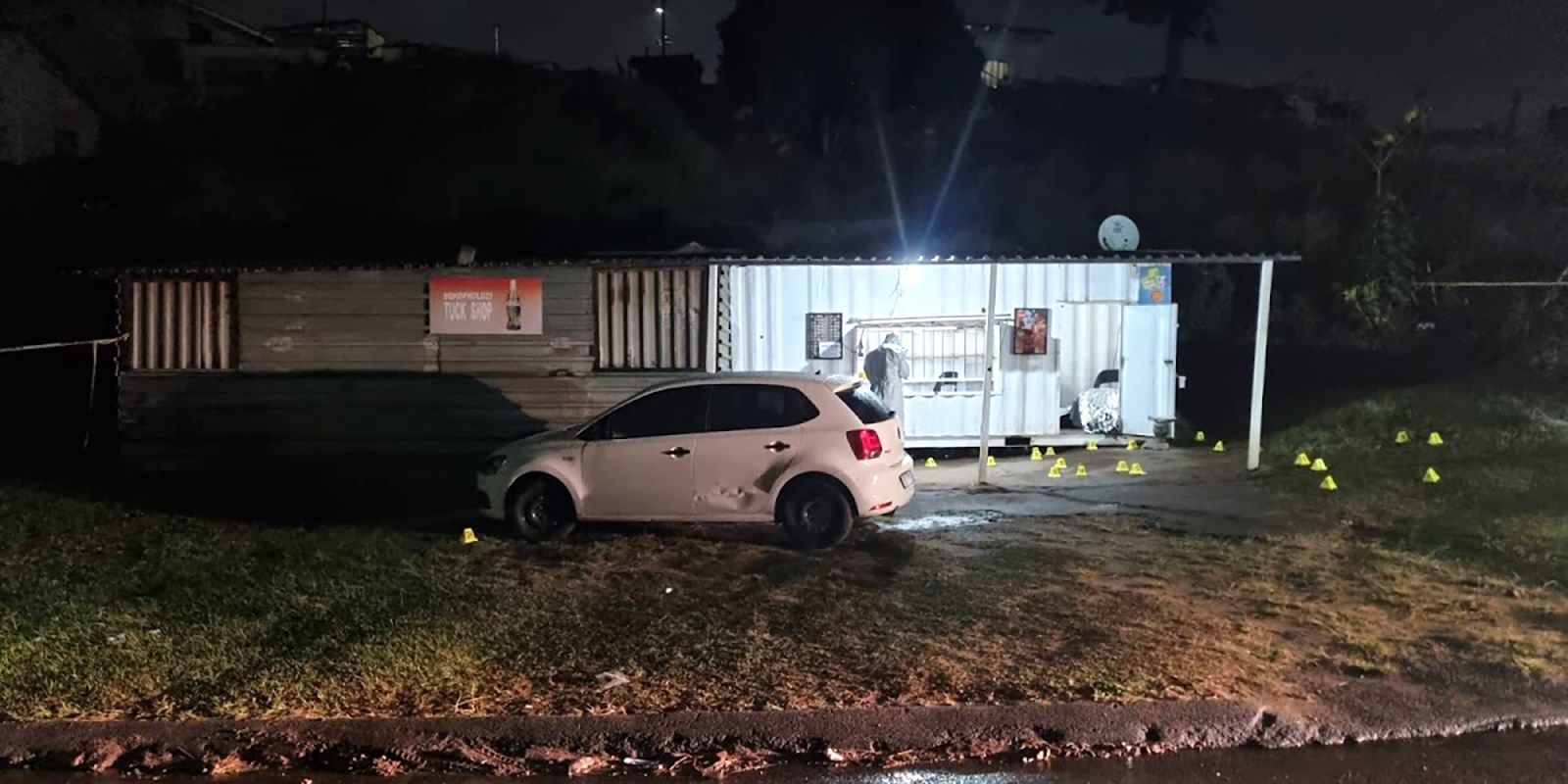 A mass shooting incident on Saturday, 30 July, left seven dead and one in hospital. The shooting took place at a tuckshop in Mariannhill, KwaZulu-Natal. (Photo: SAPS KZN)

The latest in a spate of mass shootings in SA has left seven dead and one in hospital. Three men opened fire on those gathered at a tuckshop in Mariannhill, KwaZulu-Natal, on the evening of Saturday 30 July. Meanwhile, police have arrested 65 individuals following an incident of gang rape in Krugersdorp, Gauteng.

Trigger warning: This article reports on sexual and gun violence

Another mass shooting took place on Saturday evening, claiming the lives of seven people. Six died at the scene, while two were taken to hospital with serious gunshot wounds. One subsequently died of his injuries.

The attack took place at Siqhopholozi Tuckshop, at the corner of Mpanza and Nxele Street in Savannah Park, Mariannhill, leaves seven dead, according to a News24 report on Sunday.

Lieutenant General Nhlanhla Mkhwanazi, the KwaZulu-Natal (KZN) provincial commissioner, has mobilised all available police resources to “hunt down the heartless killers” behind the shooting, stated the South African Police Service.

The attack allegedly took place at 7.30pm on Saturday evening, when a group of unknown men opened fire on those at the tuckshop. The six men killed at the scene were between the ages of 30 and 65.

Among the deceased were the tuckshop owner and his two sons.

“This incident once again demonstrates our concern that firearms are contributing to the high levels of crime in the province and we are advocating for stricter regulations regarding the management of legal firearms as many of them end up being used by criminals. We will do everything within our control to bring these killers to book,” said Mkhwanazi.

Speaking in an interview with eNCA on Sunday, KZN police spokesperson Brigadier Jay Naicker said that the perpetrators of the attack are currently facing charges on seven counts of murder and one of attempted murder, with the possibility of additional charges at a later stage.

“There was a group of people who had gathered at a tuckshop in Savannah Park. Three unknown men then approached them and opened fire on the group,” he said.

At this stage of the investigation, it is believed one of the victims was not from the area, and had travelled there to visit a traditional healer. Investigators suspect he may have been the target of the attack.

“Information would indicate that he was a criminal, and he was [seeking] the assistance of the… traditional healer – he needed protection,” said Naicker.

The Mariannhill incident is the latest in a series of mass shootings that have caused alarm among South Africans. Just two weeks ago, on Saturday 16 July, shooting incidents in Lenasia, Johannesburg, and Khayelitsha, Cape Town, resulted in the deaths of 10 people.

Read more in Daily Maverick: “Another 10 people gunned down on Saturday”

Before that, in the second weekend of July, a total of 21 people were killed in three separate tavern shooting incidents. Two shootings took place in Gauteng, resulting in 17 deaths, and one in KZN, resulting in four deaths.

An incident of gang rape and armed robbery allegedly took place in Krugersdrop, West Rand, on Thursday 28 July. A crew of 22 people, made up of 12 women and 10 men, were filming a music video in the area when they were attacked by a group of armed men, according to a media release issued by the office of the provincial commissioner in Gauteng on Friday, 29 July.

The armed men ordered the members of the film crew to lie down before raping eight of the women and robbing everyone of their belongings.

The SAPS division for Family Violence, Child Protection and Sexual Offences is investigating 32 counts of rape and a case of armed robbery in relation to the incident.

On Friday, Gauteng Provincial Commissioner of Police Lieutenant General Elias Mawela responded to the incident by leading a multidisciplinary team, made up of law enforcement and security company personnel, in arresting 65 suspects for contravention of the Immigration Act. One suspect was taken to hospital with gunshot wounds.

“Two more suspects were fatally shot after allegedly pointing firearms during police operations. Two unlicensed firearms, explosives as well as other items that belong to the [film crew] victims have since been recovered,” according to the police. DM