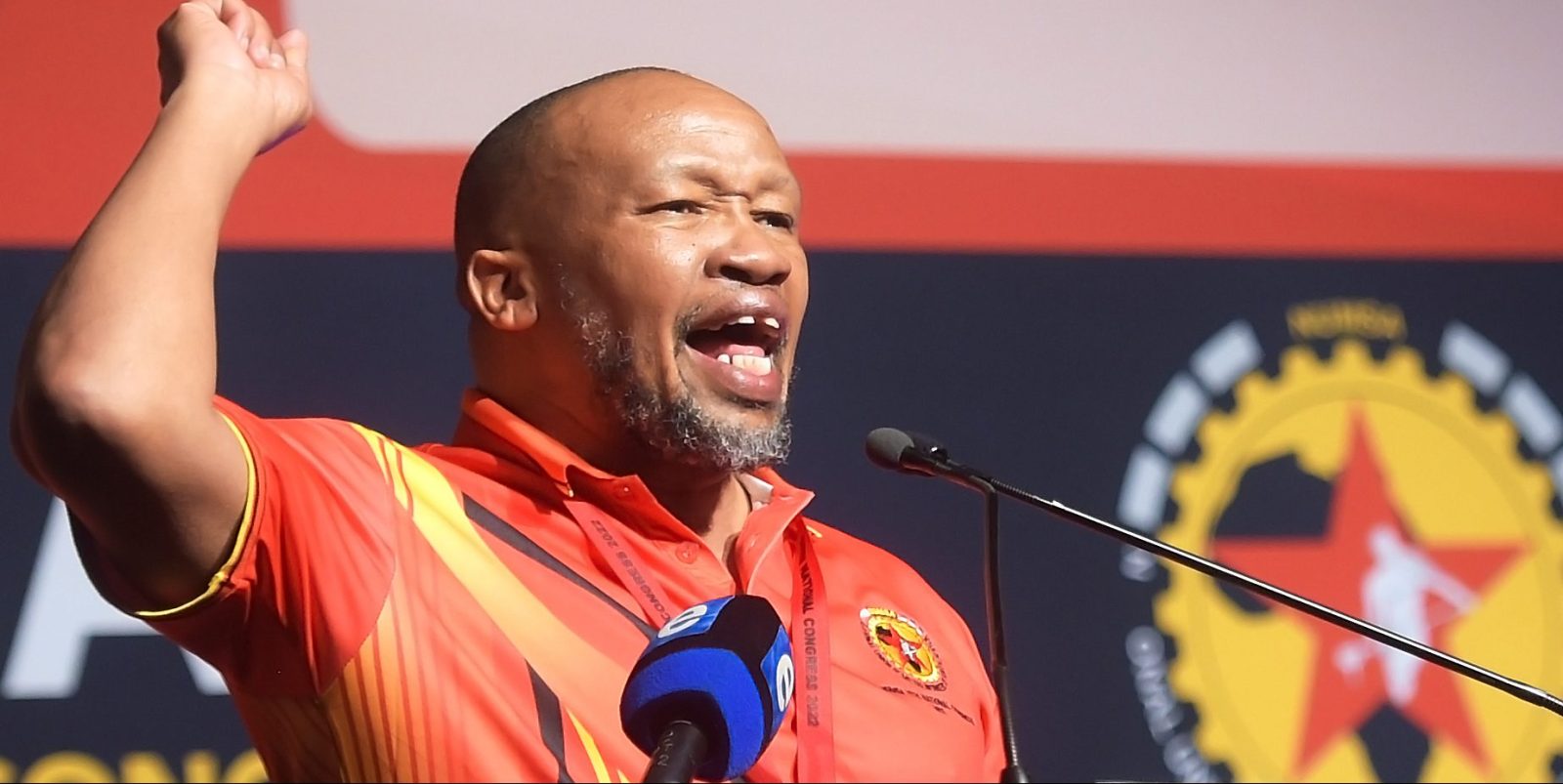 Irvin Jim the General Segretary of the NUMSA Western addresses members of the union during the unions 11th conference at the Cape Town International convention centre on 27 July 2022. The group had grievances before deciding to walk out. (Photo: Xabiso Mkhabela)

In several ways, the Numsa congress debacle brought into focus the dangers, particularly of manipulation, fragmentation and potential for violence that threatens South Africa.

That is the worst-case scenario, which, if it is to be averted, a united trade union movement would have a major role to play.  Because unions, for all their faults, are fundamentally democratic organisations, their members embedded in communities, and they are, for the most part, examples of unity in diversity.

That is the view of several senior trade union leaders, including Karl Cloete, the former deputy general secretary of the National Union of Metalworkers of SA (Numsa).

It was Numsa’s controversial and interdicted national congress that spluttered to an end at Cape Town’s International Convention Centre this week. And it did so amid threats of its leaders being arrested for contempt of court.

The interdict was delivered by the Labour Court after an application brought by a group of Numsa officials who had been suspended by the union leadership. This was held to have been contrary to the union’s constitution. Between 30 and 50 regional officials and shop stewards, labelled “rogue elements”, along with the entire Mpumalanga region of the union, were barred from attending the conference.

SA is still a parliamentary democracy

South Africa remains a parliamentary democracy, but one where state power is in disarray, with the governing ANC rent by factionalism and clearly losing support.

Getting to Parliament, into government or close to the feeding trough of state patronage is the current domestic target, not only for existing political parties, but also for a range of local opportunists, ideologues and idealists. However, there is also evidence of possible external influence in support channelled to local groups by foundations linked to China and the US.

Outside influence and manipulation

Numsa was behind the creation and launch of the Socialist Revolutionary Workers’ Party (SRWP) that stood in the 2019 elections, with union general secretary Irvin Jim as its main candidate. Though the union at the time had around 300,000 members, the SRWP garnered just 24,349 votes. However, the SRWP still professes to be “the vanguard party of the working class” and is apparently seeking, despite official denials, links with the South African Communist Party (SACP).

Ideological rifts have opened, with allegations of external interference and manipulation. In the past, the Chinese Communist Party has provided funding to the SACP, and China-based former IT tycoon and professed socialist Neville “Roy” Singham has close ties with Numsa. Singham was the donor behind the controversial recent closure of online publication New Frame. Here is plentiful fuel for conspiracy theorists, along with the fact that the US is helping to upgrade South Africa’s army.

But, whether funded or not, at a local political level different groups are trying – along with established political parties – to find ways to mobilise the voting masses in order to at least gain seats in Parliament. Also to win, perhaps, a bit part in what seems certain to be the coalition government of the near future.

In several ways, the Numsa congress debacle brought into focus the variety of  machinations under way and the dangers, particularly of manipulation, fragmentation and the threat of violence that some of these pose. The question of how the admitted R39-million bill for last week’s shambles has been financed was one of the answers being demanded by many Numsa members.

Among the costs was the hire of two companies of uniformed private security guards who kept tight control over every entrance and the foyer of the centre. The union leadership maintains they “fundraised” to pay for the congress. But a 2018 investigation by Deloitte, which emerged in court documents when Numsa-owned life insurer 3SixtyLife was placed under curatorship in December last year, unearthed the fact that the union’s investment company had provided up to R20-million in “sponsorships”.

Given this background, along with the relationship with Singham, Western Cape delegates who attended the interdicted gathering demanded clarity about the financing and the state of the investment company.  When they got no answer, they walked out.

Some of these delegates were among those who questioned whether Singham’s money – and his influence – was behind the tone of the statement in the introduction to the union’s secretariat report: “The war the United States and its Nato Western Europeans allies are waging against Russia using Ukraine as a proxy…”

‘Enemies of the working class’

There is also more than a hint of paranoia, with an official Numsa statement castigating the media and naming certain journalists as “enemies of the working class”. The union also claims that a cabal of non-governmental organisations is plotting to take over the labour movement.

This incendiary rhetoric comes hot on the heels of the victory at the KwaZulu-Natal ANC congress of the generally younger “Radical Economic Transformation” (RET) faction that refers to itself as the “Taliban”. They refer to “enemies” in a province that has recorded the highest number in a rising rate of politically motivated assassinations.

The Taliban and the RET, though playing largely on ethnic nationalism, are one of the groups battling for what some commentators still ironically call the “soul” of the ANC. But, for them, this soul needs to be under the guidance of Jacob Zuma.

Groups such as Defend Our Democracy also recognise that the ANC will probably fall below 50% of electoral support in 2024 and wish to rescue “our glorious movement”. They look to the era of Thabo Mbeki and tend to cling to the image of a pre-Jacob Zuma past when mythical probity dominated.

However, as numerous surveys have shown, increasing numbers of the voting public are disillusioned with not only the ANC but all established parliamentary parties.

In this environment, xenophobia has gained strong currency, and foreign African nationals are still prime targets for groups such as Operation Dudula. In only milder form, anti-foreigner sentiment is regularly used by establishment politicians like Herman Mashaba.

The third-largest party in Parliament, the Economic Freedom Fighters (EFF), sometimes professing, almost in the same breath, Africanism, Pan-Africanism and Marxism, has also attempted to gain inroads in representing the “left” and “socialism”.

In fact, undefined socialism seems to be the prime slogan among the various putative political alternatives that are emerging. Even North West ANC strongman and former premier Supra Mahumapelo, regarded as being close to the RET faction, this week called for “developmental socialism”.

It is a welter of jargon on one side and waffling promises on the other. But there are no serious proposals to alleviate the increasing poverty, desperation and anger mentioned by Mbeki as the fuel for social and political conflagration. DM168

Terry Bell is a journalist, editor, former political detainee, and lifelong trade unionist. He was in exile for 26 years and was the founding principal of the primary division of Somafco,  the ANC’s Somafco school for exiles in Tanzania.