A reflection on a special moment in time for Zimsomms

A reflection on a special moment in time for Zimsomms 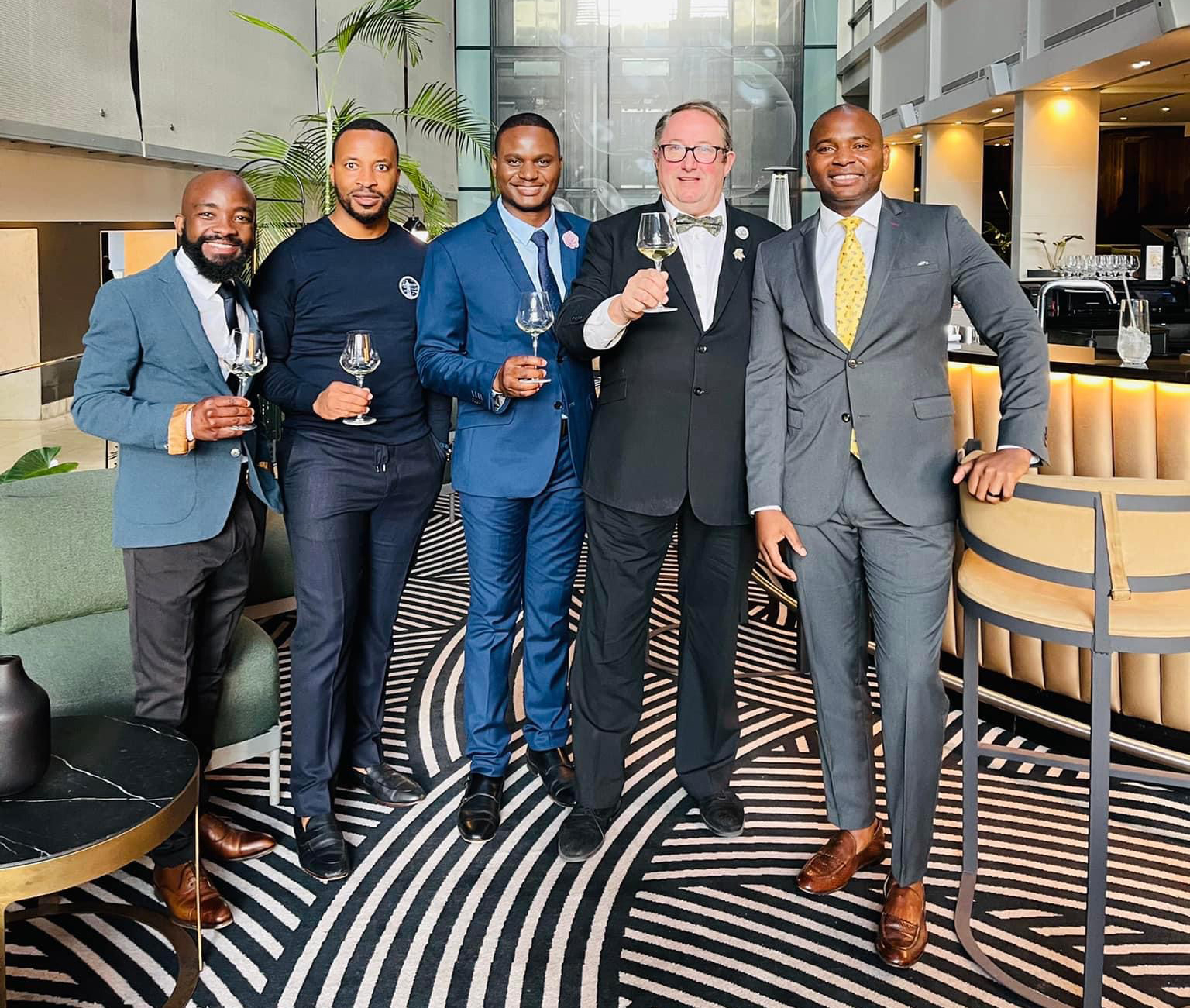 TGIFood’s Erica Platter wrote the original story about the Zimsomms, a group of Cape Town-based Zimbabwean sommeliers, for Jancis Robinson’s international wine website. And this update a year later, when the Zimsomms were about to take on the rest of the world in October 2017…

Sommeliers from 27 nations were then heading to Burgundy to compete in the 2017 World Blind Wine Tasting Championships on October 14, 2016. Current champions, and hotly favoured to retain their title, were China. But injecting new energy, charisma and crowd appeal into this esoteric sport was the unlikeliest team in the competition: Zimbabwe. And, win or lose, they were about to become movie stars… which they now are.

Erica wrote in 2017: Tongai Joseph Dhafana, Tinashe Nyamudoka, Marlvin Gwese and Pardon Tagazu swirl their glasses, sniff deeply, taste, spit, pronounce. Then do it again and again. They are four of Cape Town’s classiest restaurant sommeliers, respectively from La Colombe, The Test Kitchen, Cape Grace Hotel and Aubergine, and, on their day off, they are in training for the World Blind Wine Tasting Championships. Slotting their own references and associations into their memory banks.

“Cow dung,” they all agree about a (rather famous) South African red blend. “Derere!” (okra in Shona) they pronounce on a cabernet. “Nhunguru” (a wild plum) identifies a merlot. And so on… This is a new world of wine. These are new-generation sommeliers, making wine their own, and – with big-number WhatsApp, Facebook and Twitter followers – bringing wine to a thirsty new generation of untraditional drinkers.

Filming them is a crew from Australia-based Third Man Films, the production arm of major distributor Madman Entertainment. This is the “the first cab off the rank” for Third Man, newly-created by director Warwick Ross and producer Rob Coe. This formidable team was behind the hugely successful international documentary Red Obsession (voiced by Russell Crowe, rave-reviewed by Robert de Niro), which won a swathe of international awards. It documented China’s insatiable thirst for expensive French reds.

For three years they had been looking for a new story to tell. Ideally a wine story. Ross is himself a vigneron and owner of Portsea Estate on the Mornington Peninsula, producing pinot noir and chardonnay. Robinson made the pitch. On September 8, there was news from Down Under. Ross, after meeting the team collectively and individually via Skype, emailed: “It’s on!” Specialist advisor and Master of Wine Andrew Caillard, of Pinnacle Drinks Group Australia, messaged: “We are thrilled to be launching into this great story with you and the guys.”

Tamlyn Currin, of jancisrobison.com, who was born in Zimbabwe, commented: “It’s a powerful story, totally unique, and deserves to be told. Film would bring it to life. It would be especially moving if you could get some footage in Zim, to show people quite how staggeringly determined and courageous these men are.”

Just two weeks later, the film crew hit the ground sprinting in Cape Town, and immediately began shadowing The Team at work and play, with family and friends and mentors, tasting their personal wines (Dhafana and Nyamudoka have their own labels) and others, in many of the significant places which signpost their paths from refugee centres to the top restaurants in South Africa.

“I almost thought I was dreaming,” says Dhafana.

Gwese, youngest of the team: “To be able to share our own stories with the world! It was a dream come true.”

Tagazu echoes his teammates: “It feels like a dream but exciting. I never imagined myself in this high magnitude documentary and being filmed by one of the best film producers in the world!”

The pace and rigours of movie-making quickly kicked in. Dhafana: “This film demands lots of time and I struggled a bit to juggle with all my duties. You need to be off or wake up early, do the filming and then work a double shift.”

It is not going to get any less hectic in France, pre-competition. In Champagne, Alsace, Burgundy and on a side-trip to Germany with their coach, French sommelier Denis Garret, they will be cramming in as many wine experiences as possible, with the crew still on their tail. Nyamudoka is especially looking forward to posing in front of the Eiffel Tower (“signalling my long overdue appearance in France,” he jokes). And the whole team is fervently hoping to walk through the Domaine Romanee Conti vineyards. (Dhafana’s dream is also to taste there, “with less spitting, though”.)

Are they taking any good luck charms or rituals into the competition, apart from their Zimbabwean flag? They are horrified. There are no such things in blind tasting, they all insist. “Your first guess is the answer,“ says Dhafana. But they are devout Christians and agree with Nyamudoka, who advises: “A prayer always gives belief and confidence…” Tagazu firmly closes the discussion: “The only charm is prayer.” (A game plan that may be hard to beat…)

And so, right now, all eyes, noses and palates are on the World Champs. To which team captain Dhafana is not entirely a stranger. He had taken so brilliantly to his new life in wine, passing every exam and coming third in the South African Sommeliers competition in 2015 that he was drafted into the South African team. But coach Jean Vincent Ridon (again taking the SA team to Burgundy) knew that Dhafana’s heart lay in Zimbabwe, and it was Ridon who arranged with the organisers to admit Team Zim this year. Excitement and cork-popping all round, much waving of the Zim flag, Facebook alight.

The burning question of how to finance the team’s flights and day-to-day expenses was answered in an appropriately modern way: crowd-funding. The team at JancisRobinson.com drove the process on JustGiving. In under three months, thanks to 82 donors, the target had been reached and surpassed. The team had lift-off! Plus Zimbabwean flags, jackets, T-shirts, team photo shoots and arrays of training wines. It will be a relatively short and sweet journey, by air to France, compared to the long hard treks they made in search of a new and better life, by rural bus and slow trains from Zimbabwe to the Cape nearly a decade ago.

Captain Dhafana wrote to Robinson: “We are overwhelmed by your support. We all celebrated at our respective establishments when we saw that the target was reached. Really great news. I would like to thank each and every one of you for your effort and support to make this dream come true. Honestly, words only cannot express how we feel right now. This world is full of generous people. We as a team will do our best to make everyone happy…”

He signed off, as he does all his emails, with these words: “In water you see your own reflection, in wine you see the heart of another.”

After the competition, and a visit to the Netherlands to one of their most generous crowdfunding benefactors, the team comes home, back to work. They are all acutely aware that they are trailblazers. That they have a duty to show others the way. And to continue breaking new ground.

Dhafana is committed to “educating the new crop of sommeliers, raising wine awareness and paving the way for the young ones”. He will also be campaigning for much more widely representative judging panels, which feature up-and-coming and well-qualified young wine tasters.

Gwese is targeting “mentorship and wine education”. But most of all, “I would really like to get people to find wine fun!”

Tagazu hopes to “inspire as many upcoming sommeliers as possible; to contribute to the growth of the wine industry in Africa”.

“Living up to expectations,” is Nyamudoka’s mission. “Lots of young aspiring somms are looking up to us to perform and lead from the front. I want to do my part in motivating, supporting and mentoring future talent.”

Next year, the final scenes of their movie will be shot. Zimbabwe will feature. And here is a prediction: Robert de Niro will love this one, too.

Nyama yekugocha! (This is the team’s Shona rallying cry. Literally translated, it means “the meat is braaing”. (Cooking on the fire.) Dhafana explains: It is “a motivational song which we Zimbos sing when the national soccer team is playing. Just to boost morale”. DM/TGIFood

This story first appeared on www.jancisrobinson.com