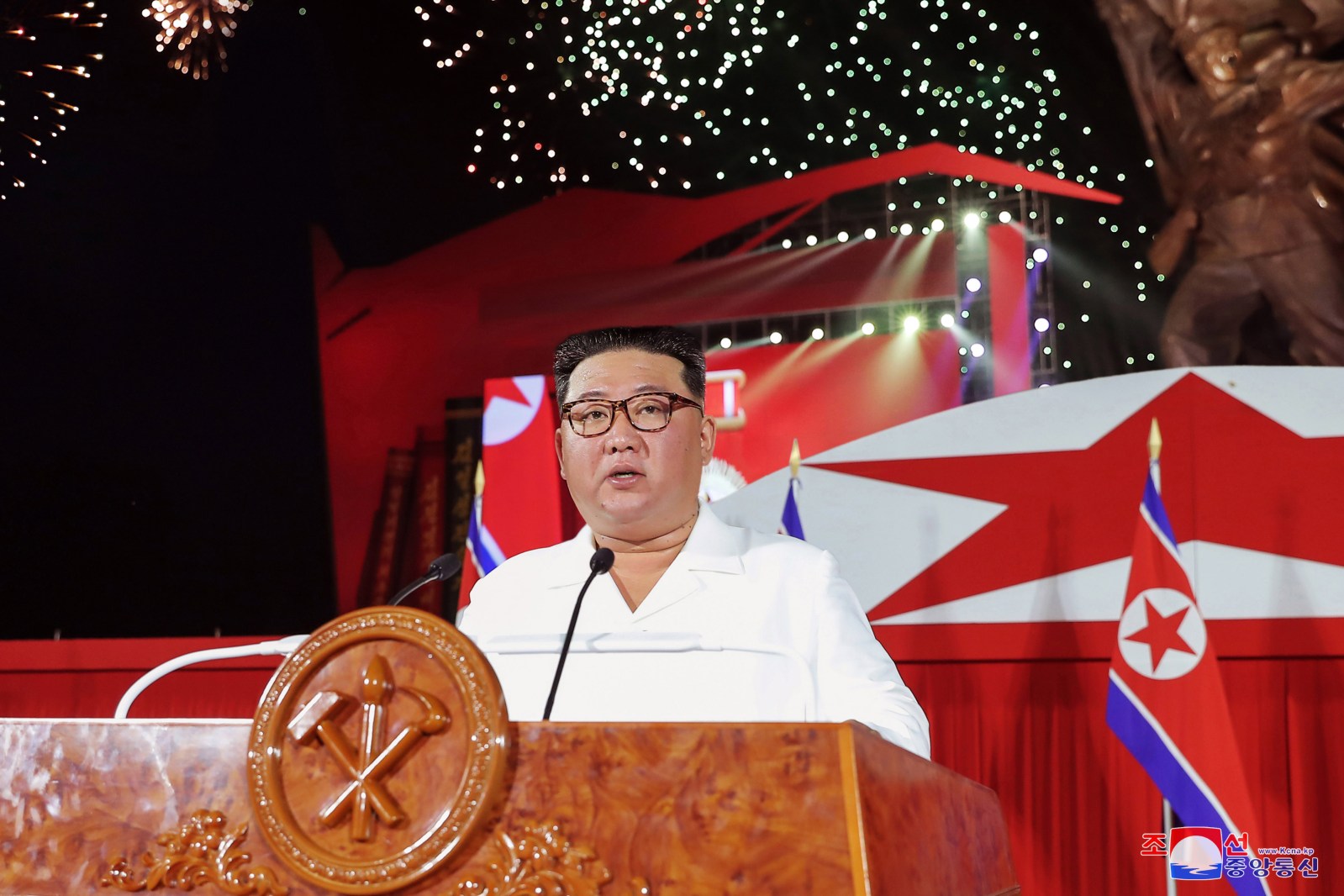 North Korean leader Kim Jong Un presiding over an event marking the 69th anniversary of the 1950-53 Korean War armistice in front of the Monument to the Victorious Fatherland Liberation War, in Pyongyang, North Korea, 27 July 2022. EPA-EFE/KCNA

Kim made the remarks during a speech at an event to mark the 69th anniversary of the July 27 Korean War armistice, which left the two Koreas technically still at war, according to the official KCNA news agency on Thursday.

The confrontation with the United States posed nuclear threats since the 1950-53 war and required the North to achieve an “urgent historical task” of beefing up its self defence, Kim said.

“Our armed forces are thoroughly prepared to respond to any crisis, and our nation’s nuclear war deterrence is also fully ready to mobilise its absolute strength faithfully, accurately and promptly to its mission,” he said.

Kim also denounced South Korea’s new conservative President Yoon Suk-yeol by name for the first time, accusing him of threatening the North’s security and right to self defence.

Yoon’s office expressed deep regret over Kim’s “menacing” remarks, saying South Korea is capable of “strongly and effectively” responding to any provocations at any time.

“We once again urge North Korea to take the path of dialogue to achieve substantive denuclearisation and peace,” Yoon’s spokeswoman Kang In-sun told a briefing.

Kim’s speech came after Seoul and Washington officials said Pyongyang has completed preparations to conduct its first nuclear test since 2017.

South Korea’s unification minister handling inter-Korean affairs said on Tuesday there was a “possibility” of the test around the anniversary of the armistice, though a military official said there were no immediate signs for it.

North Korea is likely to face stronger sanctions including measures targeting its cyberattack capabilities if it goes ahead with the test, South Korea’s foreign minister said on Wednesday.

In the speech, Kim said Washington continues “dangerous, illegal hostile acts” against the North, and seeks to justify its behaviour by “demonising” the country.

The North has long accused the United States of double standards over military activities and pursuing a hostile policy towards Pyongyang, saying it hampers a restart of talks aimed at dismantling the country’s nuclear and missile programmes in return for sanctions relief.

“The duplex act of the United States, which is misleading all the routine actions of our armed forces as ‘provocation’ and ‘threat’ while holding large-scale joint military exercises that seriously threaten our security, is literally a robbery,” Kim said.

“That is driving bilateral relations to the point where it is difficult to turn back, into a state of conflict.”

Their “heinous confrontational policy” toward the North and “toadyish, treacherous acts” are pushing the situation to the brink of war, he said.

North Korea in recent months has tested hypersonic missiles and missiles that it says could carry tactical nuclear weapons, narrowing the time that Seoul would have to respond to a pending attack.

Yoon has vowed to complete the so-called “Kill Chain” system that calls for preemptive strikes against the North’s missiles and possibly its leadership if an imminent attack is detected.

But that system would never be able to cover the North’s “absolute weapon,” Kim said.

“Such a dangerous attempt will immediately be punished by a powerful force, and Yoon Suk-yeol’s government and his army will be annihilated,” he said.

Seoul’s defence ministry said it would continue reinforcing its own capabilities and the U.S. extended deterrence including its nuclear umbrella to better respond to Pyongyang’s threats.

Yang Moo-jin, a professor at the University of North Korean Studies in Seoul, said Kim’s remarks seem to be intended to highlight the legitimacy for weapons developments and his “eye for eye” approach toward Washington and Seoul.

By Hyonhee Shin and Soo-hyang Choi