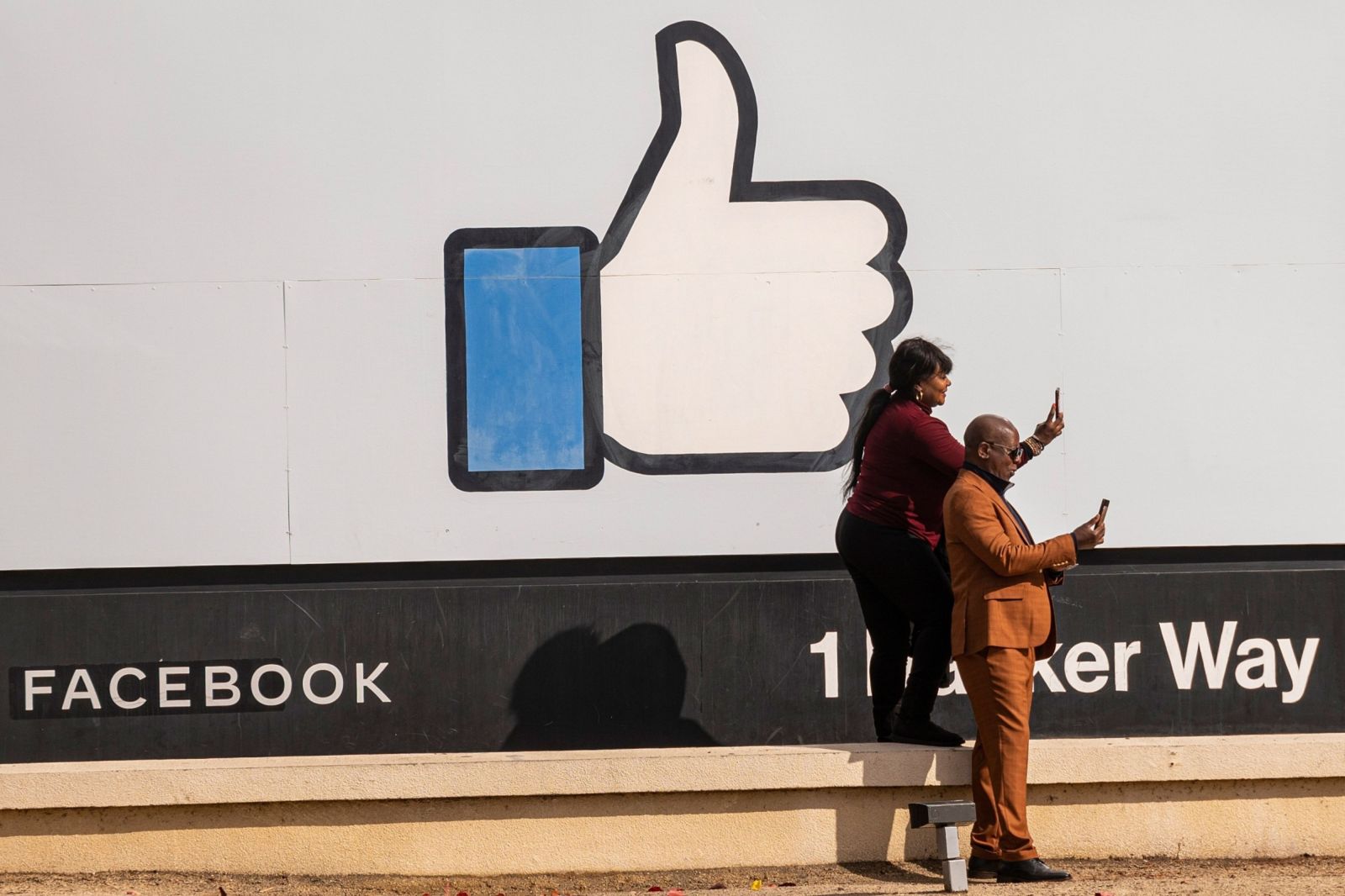 Visitors take photographs in front of signage at Facebook headquarters in Menlo Park, California, US, on 25 October 2021.

The owner of Facebook has issued a gloomy forecast after recording its first ever quarterly drop in revenue on Wednesday, with recession fears and competitive pressures weighing on its digital ads sales.

Shares of the Menlo Park, California-based company were down about 4.6% in extended trading.

The company said it expects third-quarter revenue to fall to $26-billion and $28.5-billion, which would make it a second year-over-year drop in a row. Analysts were expecting $30.52-billion, according to IBES data from Refinitiv.

Monthly active users on flagship social network Facebook came in slightly under analyst expectations at $2.93-billion in the second quarter, an increase of 1% year over year, while daily active users handily beat estimates at $1.97-billion.

Like many global companies, Meta is facing some revenue pressure from the strong dollar, as sales in foreign currencies amount to less in dollar terms. Meta said it expected a 6% revenue growth headwind in the third quarter, based on current exchange rates.

Still, the Meta results also suggest that fortunes in online ads sales may be diverging between search and social media players, with the latter impacted more severely as ad buyers reel in spending.

Snap and Twitter both missed sales expectations last week and warned of an ad market slowdown in coming quarters, sparking a broad sell-off across the sector. Read full story

On top of economic pressures, Meta’s core business is also experiencing unique strain as it competes with short video app TikTok for users’ time and adjusts its ads business to privacy controls rolled out by Apple last year.

The company is simultaneously carrying out several expensive overhauls as a result, revamping its core apps and boosting its ad targeting with AI, while also investing heavily in a longer-term bet on “metaverse” hardware and software. Read full story

Meta executives told investors they were making progress in replacing ad dollars lost as a result of the Apple changes but said it was being offset by the economic slowdown.

They added that Reels, a short video product Meta is increasingly inserting into users’ feeds to compete with TikTok, was now generating over $1- billion annually in revenue.

However, Reels cannibalises more profitable content that users could otherwise see and will continue to be a headwind on profits through 2022 before eventually boosting income, executives told analysts on Wednesday.

“They are being greatly affected by everything,” Bokeh Capital Partners’ Kim Forrest said, referring to the economic slowdown as well as competition from TikTok and Apple.

“Meta has a problem because they’re chasing TikTok and if the Kardashians are talking about how they don’t like Instagram … Meta should really pay attention to that.”

CEO Mark Zuckerberg did not appear to be swayed, however.

About 15% of content on Facebook and Instagram is currently recommended by AI from accounts users do not actively follow, and that percentage will double by the end of 2023, he told investors on the call.

For now, at least, the metaverse part of Meta’s business remains largely theoretical. In the second quarter, Meta reported $218-million in non-ad revenue, which includes payments fees and sales of devices like its Quest virtual reality headsets, down from $497-million last year.

Its Reality Labs unit, which is responsible for developing metaverse-oriented technology like the VR headsets, reported sales of $452-million, down from $695-million in the first quarter.

Although Meta has recently slowed investments as cost pressures increased, executives reassured investors it was still on track to release a mixed-reality headset called Project Cambria later this year, focused on professionals.

Meta broke out the Reality Labs segment in its results for the first time earlier this year, when it revealed the unit had lost $10.2-billion in 2021.

Its second-quarter operating profit margin fell to 29% from 43% as costs rose sharply and revenue dipped.