Six graphs that tell the HIV story in South Africa

Six graphs that tell the HIV story in South Africa 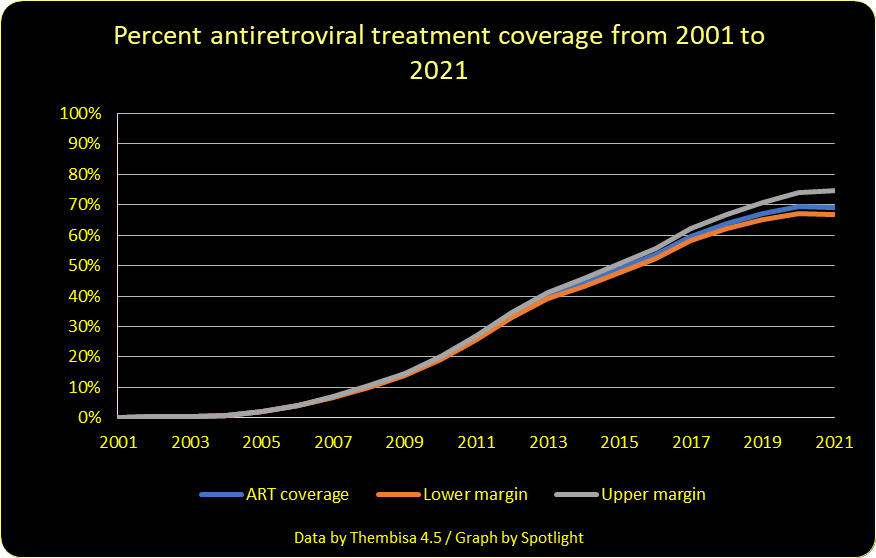 This graph shows the percentage of people living with HIV in South Africa over time who are on treatment.

In 2021, HIV was successfully suppressed in the bodies of about 63% of the almost eight million people living with the virus in South Africa. This is according to recent outputs from Thembisa, the leading mathematical model of HIV in the country. With the help of graphs, Spotlight editor Marcus Low unpacks this and other key model outputs.

Using data from Thembisa, the following graphs provide a breakdown of HIV suppression in 2021, as well as other outputs from the mathematical model.

The model estimates that there were about 7.9 million people living with HIV in South Africa in 2021, or 13.5% of the population. This number is anticipated to keep rising in the coming years since the rate of new HIV infections remains significantly higher than the rate of HIV-related deaths. There were an estimated 198,000 new HIV infections in 2021 and about 52,000 HIV-related deaths.

Of the 7.9 million people living with HIV in the country in 2021, it is estimated that 93.7% have been diagnosed. This suggests that South Africa’s massive HIV testing efforts over the past decade have largely been a success.

One alarming detail is that of the estimated 266,000 people who started antiretroviral treatment in 2021, 57,000, roughly one in five had CD4 counts below 200 cells/mm3, which indicates a significantly compromised immune system. This means a significant number of people only start treatment once they are very sick.

Given that many more women than men are living with HIV, it is not surprising that more women are on treatment than men, but the extent of the difference is eye-opening. In 2021, an estimated 3.7 million women were on treatment, more than double the 1.6 million men. The difference in people newly started on treatment in 2021 is a little less stark – 159,000 women compared with 99,000 men.

One HIV prevention intervention squarely focused on men and boys, voluntary medical male circumcision, took a significant knock in 2020 as the Covid-19 pandemic resulted in the temporary shutting down or downscaling of circumcision programmes. In each of 2017, 2018 and 2019, more than 200,000 boys aged 10 to 14 were medically circumcised. This dropped to below 70,000 in 2020 but bounced back to more than 200,000 in 2021. Older age groups saw similar drops in 2020 followed by solid recoveries in 2021.

HIV still a problem for infants and children

In 2021, it is estimated there were just more than 8,300 cases of mother-to-child transmission of HIV. On the one hand, this is a dramatic improvement on the early 2000s when the number hovered around 74,000. On the other hand, it seems remarkable that in 2022 something as preventable as mother-to-child transmission of HIV is still a substantial problem.

The details are interesting.

Of the more than 8,300 cases of mother-to-child transmission in 2021, about 2,800 occurred at or before birth – the majority (5,600) occurred during breastfeeding. One likely explanation is that some women are contracting HIV in the months after having given birth and then transmission to their babies takes place before they are diagnosed and their HIV viral load can be brought under control using antiretroviral therapy.

One of the most encouraging things in the new Thembisa outputs is the uptick it shows in PrEP use in 2021 – albeit from a very low base. PrEP (pre-exposure prophylaxis) refers to HIV-negative people taking antiretroviral drugs to prevent HIV infection. For now, PrEP is only available as a pill in the public sector, but a vaginal ring and an injection administered every two months should also become available in the coming year or two.

For most of the past two or so decades, HIV has been a key driver of life expectancy in South Africa. Life expectancy dropped precipitously from the mid-Nineties to 2004 because of HIV-related deaths and then recovered due to the roll-out of antiretroviral treatment which prevented people living with HIV from dying. Outputs from the Thembisa model have always shown this dynamic very clearly.

The latest Thembisa outputs, however, also show how Covid-19 has temporarily derailed the upward trend in life expectancy. Having recovered from about 54 years in 2004 to 64 in 2019, the pandemic knocked life expectancy back to between 58 and 59 in 2020 and 2021. DM/MC

Note: In this article, we quote outputs from Thembisa version 4.5 only up to 2021. There are also Thembisa outputs for 2022 and future years, although these are much more uncertain. We have rounded some of the numbers for easier reading. Low takes sole responsibility for any and all errors.