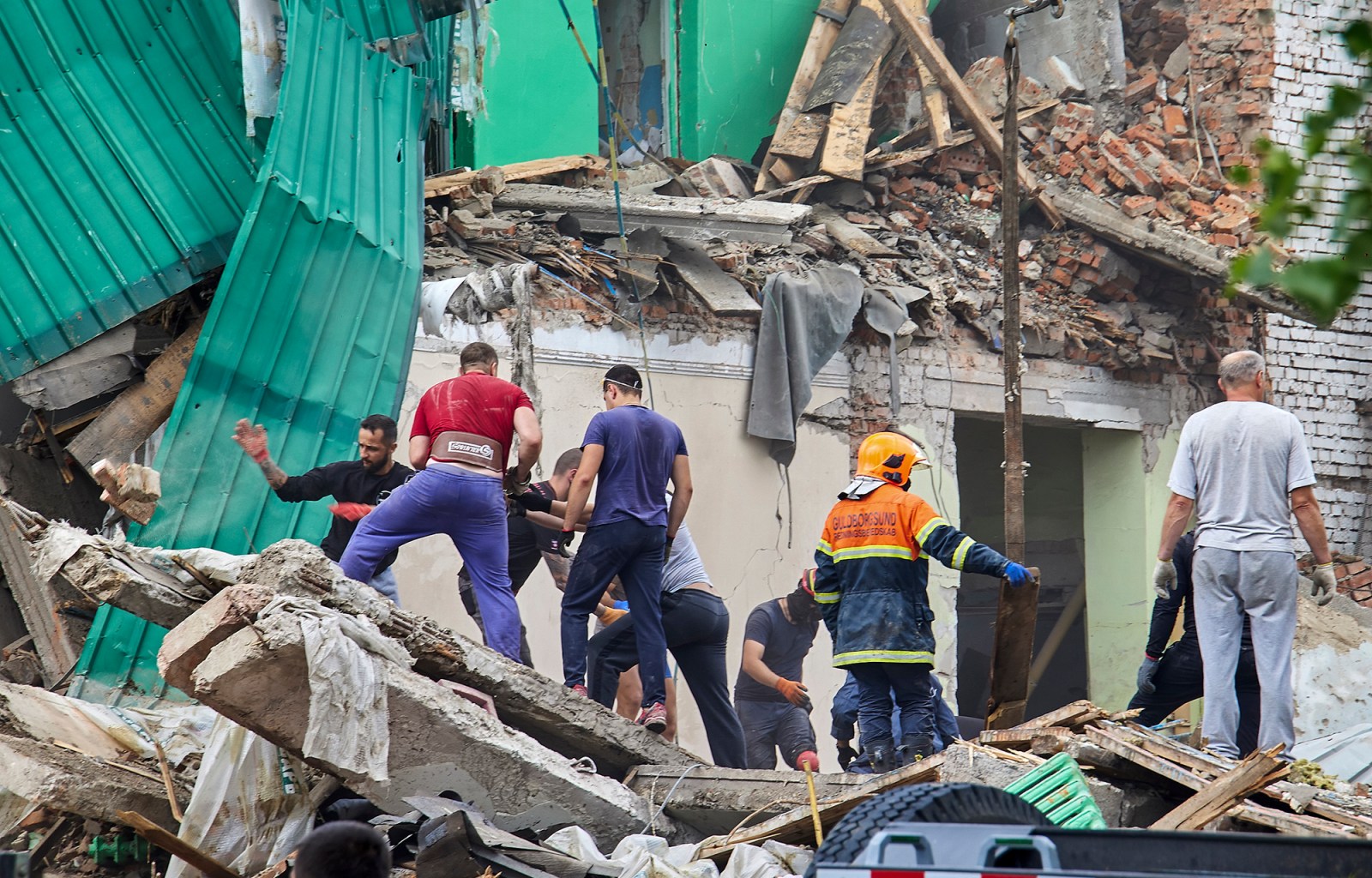 Rescuers clear the debris of the social and cultural centre building which was damaged in the previous day's shelling in the city of Chuhuiv, Ukraine, 26 July 2022. (Photo: EPA-EFE / Sergey Kozlov)

The Kremlin is likely to keep vital gas flows to Europe at minimal levels as long as the standoff over Ukraine continues, ratcheting up the pressure on the European Union over its tough stance on Russia’s invasion, according to people familiar with the leadership’s thinking in Moscow.

Gazprom earlier this week announced it would reduce supply through a key pipeline to Germany to around 20% of normal capacity from Wednesday. The Russian gas giant said one more turbine is due for maintenance, an explanation dismissed by German Economy Minister Robert Habeck as a “farcical story” that “simply isn’t true”.

EU energy ministers in Brussels agreed on a voluntary reduction in gas consumption by 15% through next winter to prepare for any further disruption in supplies from Russia.

With the war now into a sixth month, a Ukrainian offensive is under way in the south, according to Nalaliya Humenuik, a spokesperson for the military’s southern front. Russian missiles struck the Odesa region and the city of Mykolayiv, she said. Kremlin forces shelled Ukraine’s second-largest city of Kharkiv overnight, local authorities said on Telegram. In the Donetsk region, Russian troops are attempting to bolster their positions ahead of a possible assault on the cities of Siversk and Soledar, Ukraine’s General Staff said in a statement.

Russia plans to hold war games in the country’s eastern military district that will include troops from other countries from 30 August to 5 September, the Defence Ministry said in a statement that also denied plans for a general mobilisation.

“Several foreign media outlets are spreading false information about an alleged mobilisation,” the statement said, without identifying the sources.

The statement also sought to tamp down reports that the military was stretched thin due to the war in Ukraine, claiming that no planned training exercises had been cancelled.

Ukraine’s Supreme Court rejected an appeal by the former owners of Ukraine’s largest bank to overturn its 2016 nationalisation amid allegations of fraud.

The decision is final and can’t be contested in other courts, Privatbank’s press office said on Tuesday. It is one of a string of lawsuits filed by the lender’s former controlling shareholders, Igor Kolomoisky and Gennady Bogolyubov, seeking to reverse the government takeover after Ukraine seized the bank amid insolvency risks. Other cases are pending in domestic courts, with some due to be ruled upon this week.

Prior to Russia’s invasion, Privatbank’s nationalisation was a condition for Ukraine to continue to receive foreign aid, including from the International Monetary Fund, and was seen as a crucial step in the government’s fight against the country’s most influential tycoons.

Kremlin said to plan to keep up gas squeeze on Europe

The Kremlin is using disruptions in Nord Stream, its main remaining pipeline supplying Europe, to raise the political heat on EU leaders to reconsider their support for Kyiv, people familiar with the leadership’s thinking said, speaking on condition of anonymity to discuss internal deliberations.

They expect the Kremlin and Gazprom, the state-run gas giant, to continue to find reasons to keep flows limited, preventing European customers from building up the supplies they need to meet demand in the winter.

Russia denies politicising its fuel exports. Kremlin spokesman Dmitry Peskov on Monday suggested that the problems at Nord Stream were linked to Europe’s imposition of sanctions over the war, warning that while Russia was at the moment “not interested” in cutting off the gas this winter, “the situation may change”.

Russia to pull out of International Space Station after 2024

Russia will quit the International Space Station (ISS) after 2024, the newly appointed head of the country’s space programme said.

Yuri Borisov, who took over Roscosmos earlier this month, told President Vladimir Putin in a televised meeting that Russia would fulfil its obligations to its other partners in the orbital station before it leaves. His comments confirm previous statements by his predecessor, Dmitry Rogozin.

The ISS is one of the last remaining symbols of cooperation between Russia and the US since the relationship deteriorated following the invasion of Ukraine. Nasa and Roscosmos reached a deal this month for astronauts to fly on Russian spacecraft to the space station in exchange for cosmonauts riding on US-built rockets.

Turkish Defence Minister Hulusi Akar will attend a ceremony to open a grain corridor coordination centre in Istanbul on Wednesday as part of an agreement reached last week to allow grain exports from Ukraine, according to a statement from the ministry.

A Russian missile strike on the port city of Odesa after the deal was reached raised doubts about Moscow’s commitment to the accord. However, the UN later said all sides had reconfirmed their commitment to the effort and that the first shipment may move within a few days.

The EU’s gas plan makes the 15% reduction of consumption target mandatory under an emergency situation — such as a severe disruption to flows from Russia. It also envisages a number of opt-outs, including for countries whose electricity grids are not synchronised with the European system and are heavily reliant on gas for electricity production.

“Today’s decision has clearly shown the member states will stand tall against any Russian attempt to divide the EU by using energy supplies as a weapon,” Jozef Sikela, the Czech industry minister, said in a statement.

Sanctions have roiled Russia’s economy, but an updated forecast from Bloomberg Economics predicts that gross domestic product will shrink by just 3.5% this year.

That would be much less than the consensus projection of a decline of 9.1% or the International Monetary Fund’s forecast of an 8.5% contraction. The Bloomberg analysis partly reflects the shortcomings of GDP as a measure of economic health, but the loss of output has also been limited by the porousness of the energy sanctions and the effectiveness of the central bank’s actions, according to Russian economist Alexander Isakov.

German foreign minister warns war could drag on for months

German Foreign Minister Annalena Baerbock warned that Russia’s war in Ukraine could drag on “for months” and pledged to continue supplying the government in Kyiv with ammunition, equipment and heavy weapons as well as providing more financial support.

“It’s clear that we need a great deal of endurance,” Baerbock told reporters after meeting her Czech counterpart in Prague. “We must be prepared that this war, which Russia is conducting with utter brutality, and which it carries out in a way which nobody else would, could go on for months more.”

Despite “different starting positions” among member states, EU Energy Commissioner Kadri Simson expects an agreement to preemptively reduce gas use to be better prepared for a possible supply cut during the winter.

While Gazprom’s announcement “has underlined once again that we have to be ready for possible supply cuts from Russia at any moment”, it does not change the commission’s outlook, Simson told reporters before the meeting in Brussels. “We know that there is no technical reason to do so, this is a politically motivated step. And we have to be ready for that,” he added.

German Economy Minister Robert Habeck said that if Europe’s biggest economy can cut gas consumption by between 15% and 20% it has a good chance of avoiding a crisis situation for the country’s industrial companies.

“We’re in a serious situation and it’s about time everyone understood this,” Habeck said on Monday in an interview with public broadcaster ARD. “We need to bring down gas consumption, that’s what we’re working on.” DM