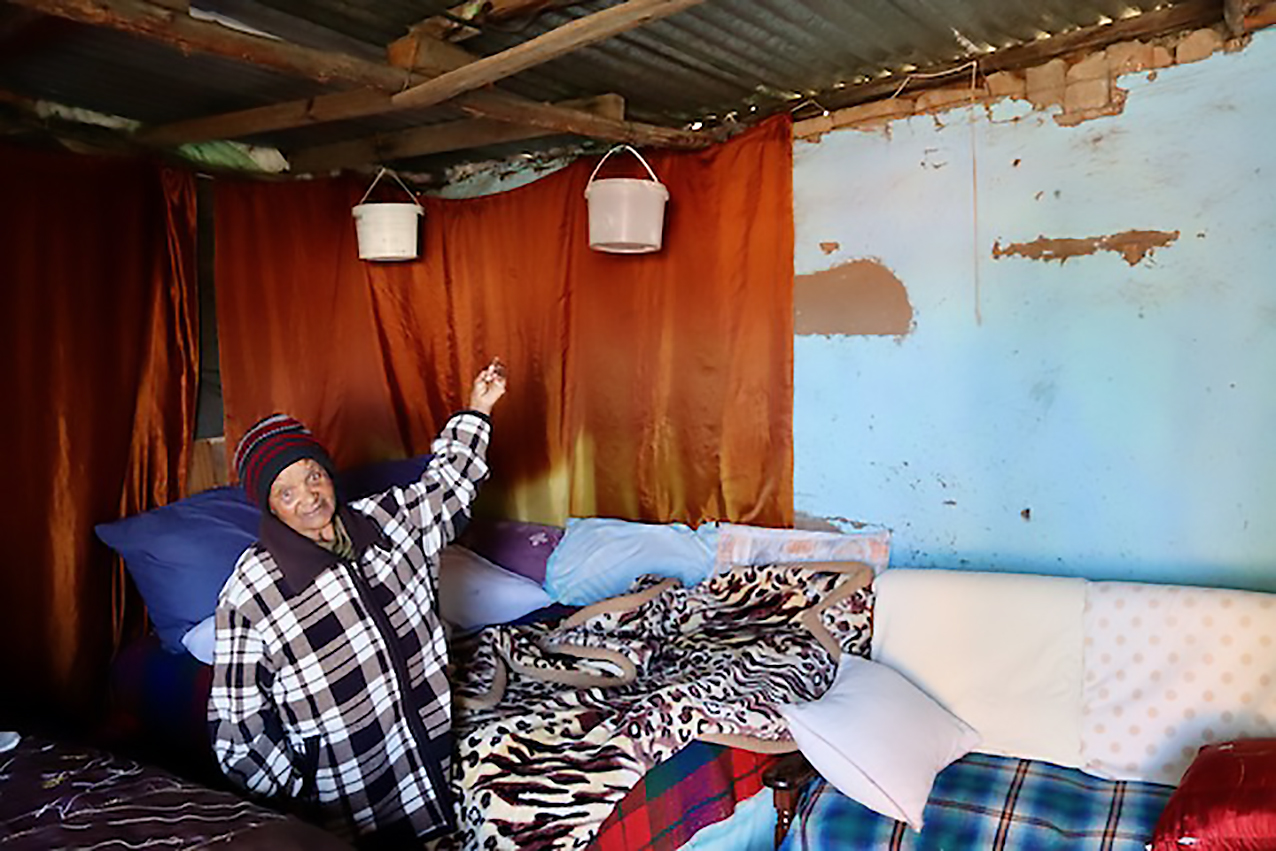 Edna Bavuma, 71, shows the buckets she has to empty when it rains. (Photo: Nombulelo Damba-Hendrik)

Nontembiso Ngcumshe was four years old when her mother moved with her and other evicted farm workers to Kei Road Township, 24km outside Bhisho, in the 1940s. When Ngcumshe’s mother died in early 2000, she was still waiting for her RDP house.

Ngcumshe, who is now 77, says: “By the look of things, I will also die waiting for a house.”

“My mother only managed to build this two-roomed shack. She lived in it until she died. I’m now sharing it with my daughter and two grandchildren,” she said.

The shack, made of old zinc sheets, leaks. We visited the area three days after it had rained. The floor was still wet. Water floods in from the back of the shack.

“We are promised RDP houses since 1996. When they want votes, they tell us about RDP houses,” she said.

But houses may finally be on the horizon for the elderly women who have been waiting for the past 26 years. A housing project is expected to commence within the year, pending budget approvals and contract awards.

At a community meeting of mostly elderly women, community leaders were asked about the houses. During the last year’s municipal elections, they were told that houses would be built in Kei Road Township and nearby Gasela township in June 2022.

June came and went with no sign of housing construction.

“Gasela staged a protest, closing roads with burning tyres. In no time a contractor was hired. Because we didn’t protest we are told to wait,” said Ngcumshe. “It is clear our government only helps those who protest.”

Edna Bavuma, 71, lives with her 47-year-old son in a three-roomed dwelling with an old zinc sheet roof and walls of loose red brick bound by wires.

When it rains, she is up all night emptying buckets that she hangs from beams beneath the leaks in her roof.

“This is the house my husband managed to build before he died. That was before I had my sons. My husband was working on farms. Unfortunately for me, I could not look for a job because of my two boys, both were mentally challenged. The second born has passed on, it is now the two of us in this house full of holes,” said Bavuma.

“As much as I have lost hope, it is my wish that I receive a house before I die, so that when I meet my husband I can tell him about living in a decent house, because he died crying for an RDP house. It really depressed him that he could not build us a proper house,” she said.

Community leader Thembinkosi Kolobile said, “We can not run away from the fact that the department appointed the contractor for Gasela after they staged a protest.”

“What is so sad about this delay is that the elderly people are demanding answers from us and we do not have them, because the department keeps on postponing,” he said.

Yanga Funani, spokesperson for the Eastern Cape MEC for Human Settlements, said the Kei Road Northern Node Housing Project for the construction of 200 houses and 421 serviced sites is under procurement. The R49-million budget is yet to be approved. Funani said the tender is expected to be awarded around mid-September but did not commit to this.

Funani confirmed that appointments had been made for the planning and construction of the Gasela 75 Housing Project. DM