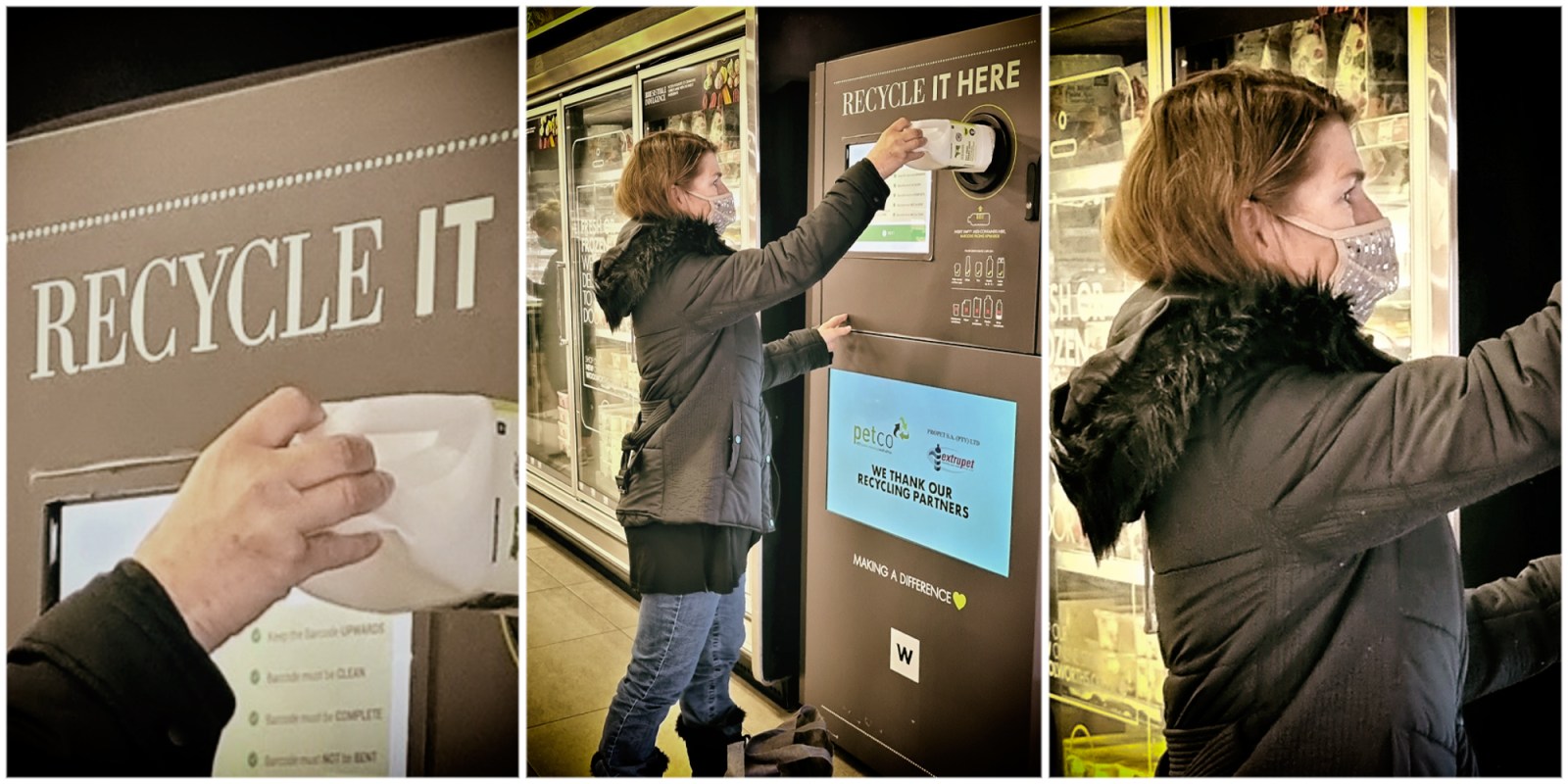 A shopper uses a reverse vending machine at the Woolworths outlet in Hout Bay. (Photo: Supplied)

The separation of waste at source is a key factor in reducing the load on South Africa’s overburdened landfills. To help turn the tide, reverse vending machines are deployed to mop up and monetise valuable recyclables.

The phenomenon of reverse vending machines (RVMs), those jauntily branded outsize metal boxes that swallow recyclables and spit out rewards, is on a seemingly limitless growth path.

While these machines are being rolled out at retailers across the country, a 12-month assessment of the RVM experience by various entities makes for compelling evidence of their impact.

As in any report of this sort, the sample and reach of the project must be seen for what it is — a limited pilot that quantified public support for several RVM machines in granular detail of recyclables received. Much of the data originated from RVMs at Woolworths outlets during an extensive trial since its inception, back in 2018.

For good measure, the report also shed light on related trends and challenges, not least the overwhelming weight of glass in the recycling mix.

The report was compiled by Imagined Earth, the suppliers of the RVMs to participating retailers from June 2021 to June 2022. It must be said these RVMs are seriously sophisticated beasts that process glass, aluminium, PET, HDPE, tetra pak and steel, in a large metal box in what represents significant advances in the recycling philosophy of sorting waste at source.

The report included data of RVMs at Woollies outlets in Cape Town as well as Bassonia in Comaro Road in Gauteng and Hillcrest in KZN. It showed that from June 2021 to June 2022, a total of 8,350.47kg of recyclables were collected representing 118,785 individual items of glass, aluminium, PET, HDPE and tetra packs.

In return, members of the public were paid a modest R5,314.39 in redeemable vouchers. The monetary value, Imagined Earth explained, is calculated by multiplying the weight of an item with its value set by its customers.

Woollies pointed out that the objective was never to enrich individuals, but to incentivise customers to divert recyclables from landfills. It’s a trend gaining traction, as the monthly tally over the past 12 months suggests. Having collected just over 3,600 items in June 2021, the RVMs currently process between 20,000 and 30,000 recyclables monthly.

It’s a pattern evident at individual stores, even at the Woollies HQ in the Cape Town CBD where only 4% of glass in the recycling mix weighs in with a hefty 50% of the total weight. In a departure from the PET norm elsewhere, aluminium (62%) dominates the recycling mix at Longmarket Street.

The back end of the RVMs is driven by Imagined Earth’s proprietary tech stack and a mobile app that scans a barcode on a recyclable to verify its suitability. Once greenlighted, the item is deposited and a customer is notified with the appropriate voucher.

“We design supply chains to support our RVM network and aim to support the industry as a whole and the suppliers we work with by not participating in the material value chain. This importantly allows consumers, as the owner of the product, to receive the highest possible price for their product deposits.”

Most recently, 50 RVM and recycle pods were placed with Shell and its retailers, while a pilot with BP is imminent, he said.

To expand the recycling model to middle and lower LSM areas, a container plant was launched recently. Manufactured in Mandeni, in KwaZulu-Natal, the “container solution” was developed in partnership with Spar and Barrows Global, with Unilever subsequently joining the party.

Five of these recycling centres are destined for JSE-listed Exemplar properties in Alexandra, Diepkloof Soweto, Tsakane Brakpan, Vosloorus and Olievenhoutbosch in Centurion.

At the end of 2020, Imagined Earth launched what it claimed was a world-first partnership with online share trading platform EasyEquities to buy shares on the JSE with funds generated from recycling.

The total amount of recyclables collected by RVMs since Woollies piloted the first machine in South Africa at its Cape Town head office in 2018 amounts to 15,899.51 kg. In total, 11 RVMs collected 243,120 individual items to realise R11,843.38 over the four-year period.

While the Covid lockdown had a material impact on the RVMs’ operations, monthly usage increases are seen across all the machines since the lifting of restrictions, said Jewson.

Anecdotal reports suggest the Woollies trend is experienced in other RVM applications, which brings a glimmer of hope to the plight of the country’s seriously overburdened landfills. DM/OBP