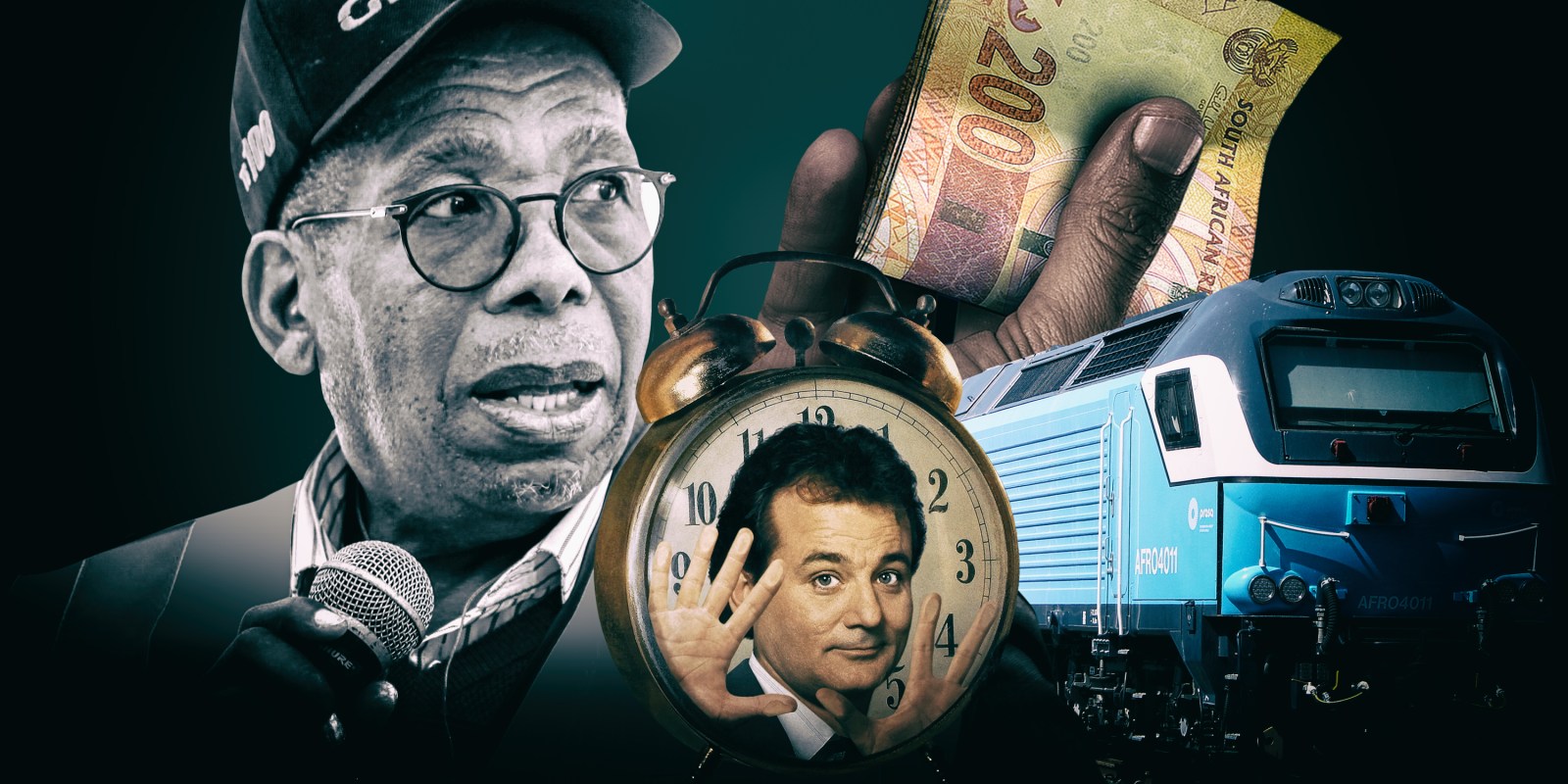 The way ANC apparatchiks repeat the follies of bygone years leaves one feeling like Bill Murray’s character in ‘Groundhog Day’. In the 1993 classic, the same day repeats itself over and over again. Despite the Zondo Commission and a damning Supreme Court of Appeal judgment, Prasa’s new leadership is recycling old lies about its infamous tall locomotives.

It happens every few months.

My notifications on a certain social media platform — that one awash with blustering inanity instead of facts and reason — light up like the windows in my neighbourhood after a round of rolling blackouts.

These little commotions almost invariably stem from a tweet by someone hiding behind the safety of an anonymous account.

And the tweets are almost guaranteed to be about one thing and one thing only — those damned locomotives bought by South Africa’s Passenger Rail Agency, or Prasa.

The infamous Afro 4000 locomotives are at the heart of Prasa’s R3.5-billion tall trains blunder.

Over the years, the matter has routinely been excavated and recycled by forces sympathetic to the likes of former president Jacob Zuma and ex-Prasa boss Lucky Montana.

You see, the “neoliberal” media, mostly yours truly, had disseminated blatant lies about the corrupt train deal and Prasa’s almost comical misjudgment of the locomotives’ height, all in an attempt to discredit the Zuma government and Montana.

It is easy to ignore the trolls and bot accounts that circulate such nonsense.

But when their inaccuracies creep into public utterances from top officials, like long-serving ANC apparatchik and current Prasa chairperson Leonard Ramatlakane, the record needs to be set straight.

The latest Prasa-inspired Twitter fuss was kicked off by comments Ramatlakane made at a recent media briefing in Pretoria.

The Prasa chairperson made several factually incorrect statements about the vexed trains, providing fresh fuel for the bots and trolls.

Fib 1: The original exposés were based on the wrong information

Ramatlakane last week repeated a fib that has been doing the rounds ever since those stories were published: that I had relied on dubious source material.

The Prasa chairperson told journalists I had based the original stories on a Transnet manual instead of using the correct Prasa specifications.

This is a lie.

The first Rapport story was based on verbal accounts from several of Prasa’s own employees.

It was a somewhat gung-ho decision to publish a story of this magnitude without a single shred of documentation, but I strongly felt the source accounts were solid and detailed enough.

After the first report in July 2015, Montana and his colleagues predictably said we were spinning a tall story.

However, we were also given more information from reliable sources.

Crucially, some of those individuals had stacks of documents regarding the deal, allowing us to publish even more detailed accounts of the botched contract.

This included a 2014 report from Prasa’s own engineering team that unequivocally found the Afro 4000s to be too tall for the rail lines they were due to traverse.

“The locomotive structure gauge does not fit in the infrastructure clearance envelope. It is evident that there is a compliance conflict,” the Prasa engineers determined.

And: “The new diesel locomotive (with no pantograph) has a minimum calculated roof clearance of 10mm, which will be an operational electrical risk. This clearance, even with a nominal clearance of 80mm from the 4,220mm, will be non-compliant in the 25kV AC electrified areas.”

We’re publishing the full document here. We strongly urge Ramatlakane to read it.

The document dispels false claims that the initial reports were based on information that came from outside of Prasa.

After the 2015 exposés, the Railway Safety Regulator (RSR) investigated the Afro 4000 matter.

Last week, without blinking an eye, Ramatlakane falsely claimed that the RSR had “dismissed” the media reports.

This is not true.

On the contrary, the RSR confirmed and highlighted the concerns over the locomotives’ height.

Here’s an extract from the RSR’s findings: “The height of the AFRO 4000 locomotive was measured at 4,140mm, which is 175mm higher than the track maintenance manual requirement of 3,965mm. By exceeding the vehicle gauge, the clearance safety margin between the top of the vehicle and the Overhead Traction Equipment is reduced.”

In other words, because the Afro 4000s were too tall, they ran the risk of making contact with overhead power lines, or catenaries, on parts of the  rail network.

This was an insanely dangerous prospect, considering the high-voltage power running through those cables.

In fact, the RSR report included photos of burn marks on the roofs of some of the Afro 4000s after they had actually made contact with overhead catenaries. 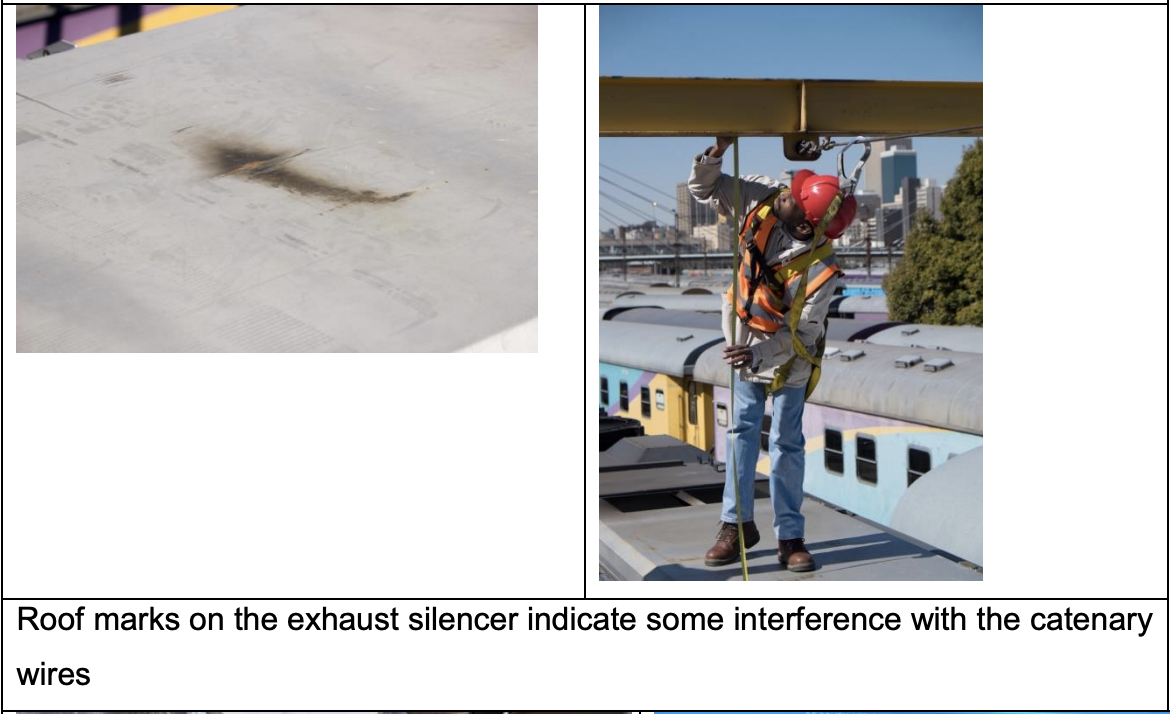 Here is a link to the full RSR report.

Fib 3: The Afro 4000s are safely operating in South Africa

In 2019, a local private rail operator bought several of the Afro 4000s at an auction organised by the liquidators of Swifambo, the front company that had clinched Prasa’s R3.5-billion train deal.

At the recent press briefing, Ramatlakane relied on that development as the basis for perhaps his most egregious falsehood regarding the locomotives’ suitability for South African railway lines.

“All those locos that have been auctioned, they are running in the country [in South Africa], and they don’t break bridges, bridges are still standing, they go under the bridges.”

This is an outright lie. As Prasa’s chairperson, Ramatlakane should be fully aware of this.

Here are the facts:

Traxtion, the private rail operator, bought seven of the 13 Afro 4000s delivered to South Africa before the July 2015 exposés sank the deal.

Traxtion ditched the Afro4000 label and instead refers to them as Euro4000s.

The remaining Afro 4000s are gathering dust at Prasa depots.

None of the locomotives Traxtion bought is operating in South Africa.

The company instead leases them to Calabash Freight Limited, a private rail operator running freight services between Zambia and Tanzania.

What’s more, because of the height issue, Traxtion couldn’t even move the Afro 4000s up north on South Africa’s rail network.

They were instead put on trucks and driven to the Beitbridge border post, where they were finally put on rail on the Zimbabwean side of the border and then moved to Zambia.

“The real problem that we have with these locomotives is obviously the sensitivities regarding the height on these locomotives, so we had to truck them through South Africa,” Traxtion’s CEO, James Holley, explains at around 4:49 in this interview.

At 2:42, Holley reflects on the costs involved in transporting these heavy locomotives by road.

It is unacceptable for someone in Ramatlakane’s position to mislead the public about key issues at this important state-owned enterprise.

There should really have been no further “debate” on this matter after 2017.

In that year, the Supreme Court of Appeal (SCA), having applied itself to engineering reports and other documents pertaining to the trains, in no uncertain terms ruled that the Afro 4000s were too tall.

“The locomotives already delivered to Prasa (some 13 in all) are not fit for purpose. They cannot be, and are not, used,” reads the SCA judgment.

If he has not done so yet, Ramatlakane can easily access and read the full judgment here.

Having studied the SCA ruling and the documents that informed the decision, Judge Raymond Zondo’s State Capture report made a similar conclusion.

If Ramatlakane has access to material or knowledge that debunks the internal Prasa engineering reports or challenges the findings by Zondo and the SCA, he needs to share it with the public.

If not, he is abusing his position as Prasa chairperson to lie to the public.

At the end of his recent address, Ramatlakane had the gall to say: “…but of course, we are not angry with the reporter, he was trying to do the best, and then messed it [up] completely”.

The only people who could rightly harbour any anger over this matter are South Africa’s long-suffering rail commuters.

They’ve been let down by Prasa’s past leadership which, through a corrupt deal, bought unusable locomotives that effectively left them stranded.

And if Ramatlakane’s recent behaviour is anything to go by, they can expect yet more deceit from those currently leading the organisation.