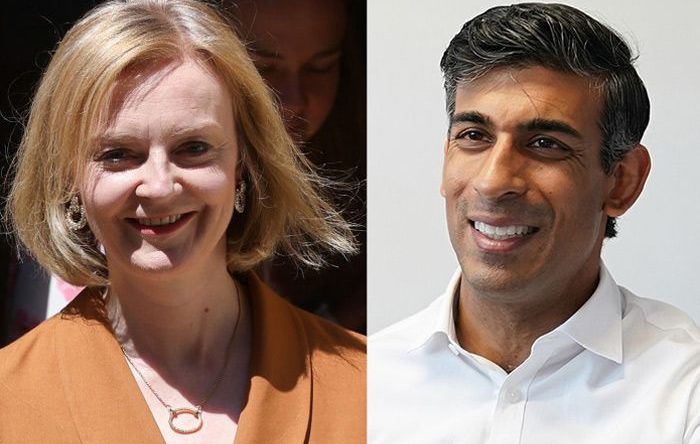 Foreign Secretary Liz Truss, who is leading the race to be Britain’s next prime minister, said she would introduce low-tax, light-regulation investment zones across the UK to spur economic growth if she came to power.

Under the plan, which is the latest policy offer aimed at wooing the 175,000 Conservative Party grassroots members who ultimately decide the next Tory leader, areas would be selected for redevelopment. They’d be given features such as reduced planning restrictions and a lower tax burden to encourage enterprise, according to a statement from the Truss campaign late on Sunday.

Truss’s rival in the race for 10 Downing Street, former Chancellor of the Exchequer Rishi Sunak, used his latest policy announcement to pledge a crackdown on the influence of China in the UK, describing it as the “biggest long-term threat to Britain and the world’s economic and national security”.

Read More: Truss survived knife-edge vote and is favourite to be UK premier

Who will replace Boris Johnson as UK prime minister?

Rishi Sunak and Liz Truss are going head-to-head, and the economy is the key battleground https://t.co/esJYfvDguy pic.twitter.com/vgo8f1wt7w

The Truss and Sunak campaigns have sparred in recent days over issues including illegal immigration, national security and the economy, both seeking to pitch themselves as the true candidate of the ideological right to win over their party faithful. Tory members will cast their ballots over the coming weeks and the winner is announced on 5 September.

Truss is the current front-runner in the race, with a YouGov poll last Thursday showing her 24 points ahead of Sunak among grassroots Conservatives. The contenders’ next major test is their first head-to-head TV debate on Monday night, broadcast on the BBC at 9 p.m. in London.

They’ll have another televised debate on Tuesday night on TalkTV, before commencing a series of nationwide hustings starting in Leeds on Thursday. The final stump is in London on  31 August.

Though behind in the contest, Sunak could still pull it back, starting with Monday night’s debate. He was deemed a better performer in the TV debates earlier in the race – when other candidates were still in the running – and will also hope to gain momentum at the face-to-face hustings with party members.

Of her investment zone plan, Truss said it was an example of how she’d be “laser focused on turbocharging business investment” and that the zones would deliver the “growth our country desperately needs.” Tax-cutting and more government borrowing have been key features of her campaign, yet investors say her prospectus carries greater economic risk than Sunak’s and is likely to spark losses in UK currency and bond markets.

Concerning China, Sunak said he would look at banning Chinese acquisitions of sensitive British assets and would close the 30 Confucius Institutes in the UK, which promote and teach Chinese language and culture. The Truss campaign hit back at Sunak’s anti-China credentials, arguing that while Chancellor he’d been pushing for the resumption of economic and trade discussions with China.

“I will stop China taking over our universities, and get British companies and public institutions they cyber-security they need,” Sunak said in a statement from his campaign team. “For too long, politicians in Britain and across the West have rolled out the red carpet and turned a blind eye to China’s nefarious activity and ambitions.”

The Truss and Sunak camps also burnished their anti-immigration credentials over the weekend, a popular stance among grassroots Tories, with both campaigns pledging tough action to deter migrant crossings from France.

Sunak said he would tighten the statutory definition of who qualifies for asylum in his first 100 days in office and fight the European Court of Human Rights. Truss said she would fully implement the government’s plan to send asylum seekers to Rwanda and explore similar partnerships with other countries. BM