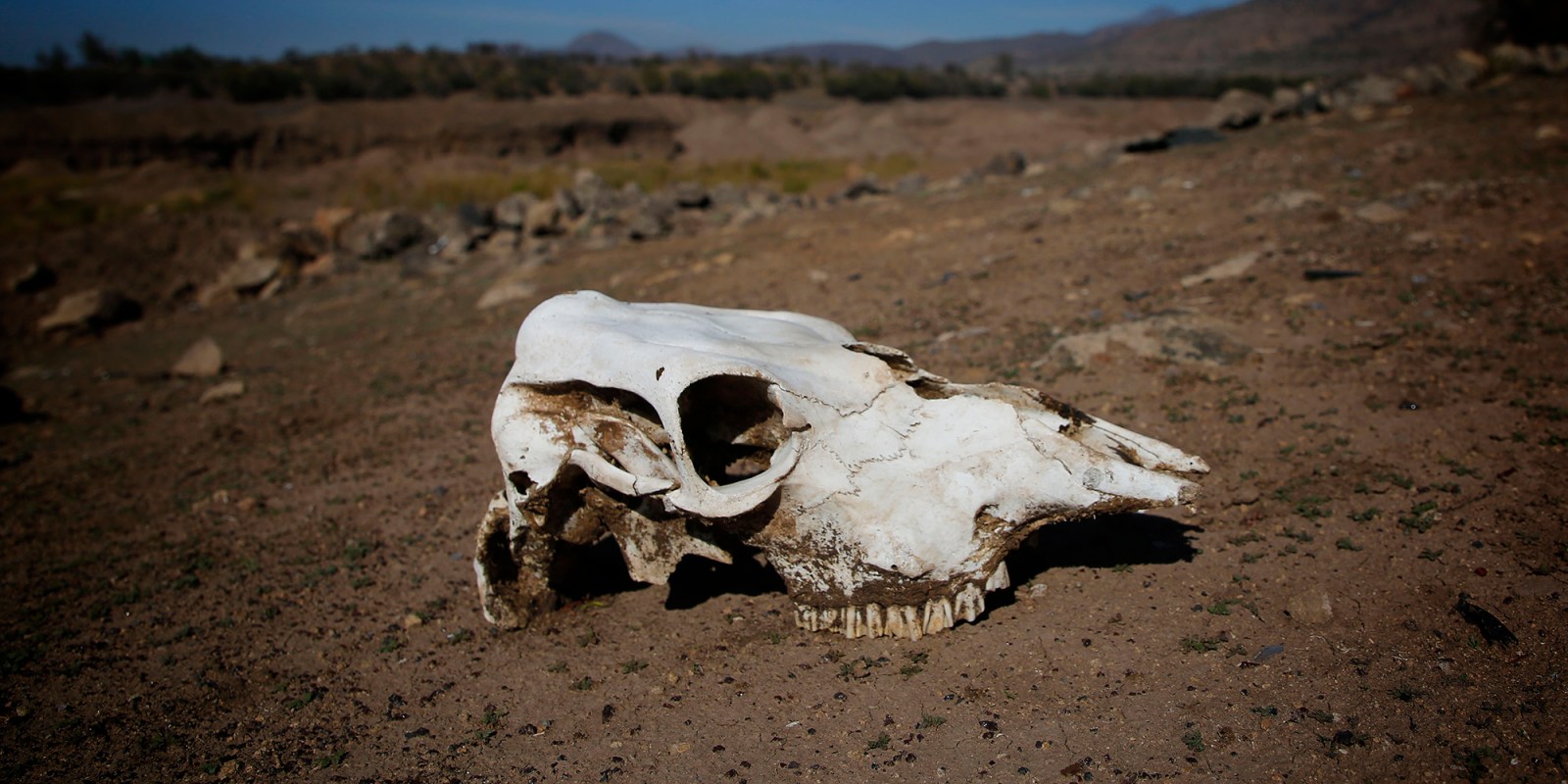 The skull of a cow in the town of Til Til, 60km north of Santiago, Chile on 10 May 2022. Water reservoirs of surrounding areas of Santiago have dried up after a decade of low rains and misuse of water. The situation has forced Chile to enforce a water rationing plan with rotating cuts to different parts of Santiago. (Photo: Marcelo Hernandez / Getty Images)

The climate crisis is being felt and dealt with in various ways worldwide. In these daily climate briefs, we aim to give a round-up of the latest developments and news from across the globe.

Heat, drought and floods — made worse by climate change — decimated crops in Latin America in 2021, leading to thousands of people falling victim to food insecurity and affecting global markets, according to the latest report by the World Meteorological Organisation.

“Droughts, heatwaves, cold waves, tropical cyclones and floods have unfortunately led to the loss of hundreds of lives, severe damages to crop production and infrastructure and human displacement,” said WMO Secretary-General Petteri Taalas. “The continued degradation of the Amazon rainforest is still being highlighted as a major concern for the region, but also for global climate, considering the role of the forest in the carbon cycle.”

The planet has already warmed 1.1°C above the pre-industrial average and atmospheric concentrations of greenhouse gases in the atmosphere keep increasing. Developing nations, including many in South America, are suffering the most from the consequences of global warming that has been caused by carbon emissions released mainly by developed countries.

Below-average rainfall in key agriculture producers such as Chile, Brazil, Uruguay and Paraguay led to a 2.6% decline in South America’s 2021 cereal harvest, according to research by the United Nations’ Food and Agriculture Organisation cited by the report. The shift in precipitation patterns was partly related to La Niña, while climate change very likely played a role in at least some of the extreme weather events in the region.

A mega-drought in Chile continued for the 13th consecutive year in 2021, making it the longest drought in the region in at least 1,000 years, according to the WMO. The latest report by the Intergovernmental Panel on Climate Change states that there is medium confidence that the drought in central Chile can be attributed to human influence.

In the Parana-La Plata river basin, which runs along Brazil, Paraguay and Argentina, the worst drought since 1944 is affecting agricultural production, reducing the output of soybean and corn and affecting global food markets. The export of cereals, 80% of which happens through the Parana River, was also affected as water levels fell to the lowest since the 1940s.

Deforestation rates in the Brazilian Amazon have doubled compared with the 2009-2018 average and reached the highest levels since 2009, according to the report. The rainforest has been hit by fires, too, with 75,000 blazes reported in 2021, most associated with human activity.

Galvanize led a $40-million funding round for San Francisco-based Arable, whose weather equipment gives farmers information on how much sunlight and water crops are getting, and can help optimise when to irrigate or fertilise. Such visibility is becoming increasingly important amid tight on-farm labour in the US and with drought shrinking water reserves. At the same time, Russia’s invasion of Ukraine has helped send prices for fertiliser and crops such as wheat to their highest yet.

“There’s so many different things we need to do better in agriculture in terms of both using the land more productively, but also using water, fertiliser and pesticides much more carefully,” Steyer said in a phone interview. “If you can’t measure those impacts and manage it using the information, then you’re doing everything by the seat of your pants.”

Arable’s clients include Treasury Wine Estates, which is trying to maximise scant rainfall in California, and the World Food Programme in Mozambique, one of the countries most affected by climate change. There’s room to grow in the field of providing extremely localised weather with costs surging from seeds to fuel.

“Across the industry and globally, it’s still a very low adoption of farmers who actually use data to drive decisions,” said Jim Ethington, the chief executive officer of Arable, in a phone interview. “That has shifted the mindset of the market.”

The risk is that agriculture’s carbon footprint will increase from roughly a quarter of the world’s greenhouse gas emissions as more land is cleared to feed a rising global population. — Bloomberg

The white sands of Namatakula have nurtured generations of world-class rugby talent, but rising sea levels threaten to force the abandonment of the palm-fringed village on Fiji’s Coral Coast within a few years.

The village is deemed “at risk” by Fiji’s government and headman Josevata Nagausaukula contemplates a future in which children now honing their rugby skills have been shifted, with their families, to higher ground inland.

“I’m really worried. Because what’s going to happen in a few years’ time? For our next generation. What’s it going to be?” the 43-year-old told Reuters.

“Really worried about those who are coming up. Our grandchildren, our great-grandchildren. What are they going to face?”

The beach where Lote Tuqiri and his cousin Tevita Kuridrani first developed the skills that would take them to international rugby stardom has been eroded to the point that boulders have had to be brought from the interior to shore it up.

“Before it was pure sand, just sand, no rocks,” added Nagausaukula, holding a handful of stones. “It was a playground in here… just because of climate change and the rising of sea levels it has been washed away.”

Rugby is close to a national obsession in Fiji, with more than 80,000 registered players among a population of 900,000 — one of the highest in the world pro rata.

Namatakula is not alone in being threatened by rising sea levels and the London School of Economics estimates that up to 1.7 million people in the Pacific region could be displaced by 2050 because of climate change.

The villagers have pinned their hopes on plans to build a sea wall funded by the British High Commission, which would preserve the village and allow the children to continue to play rugby.