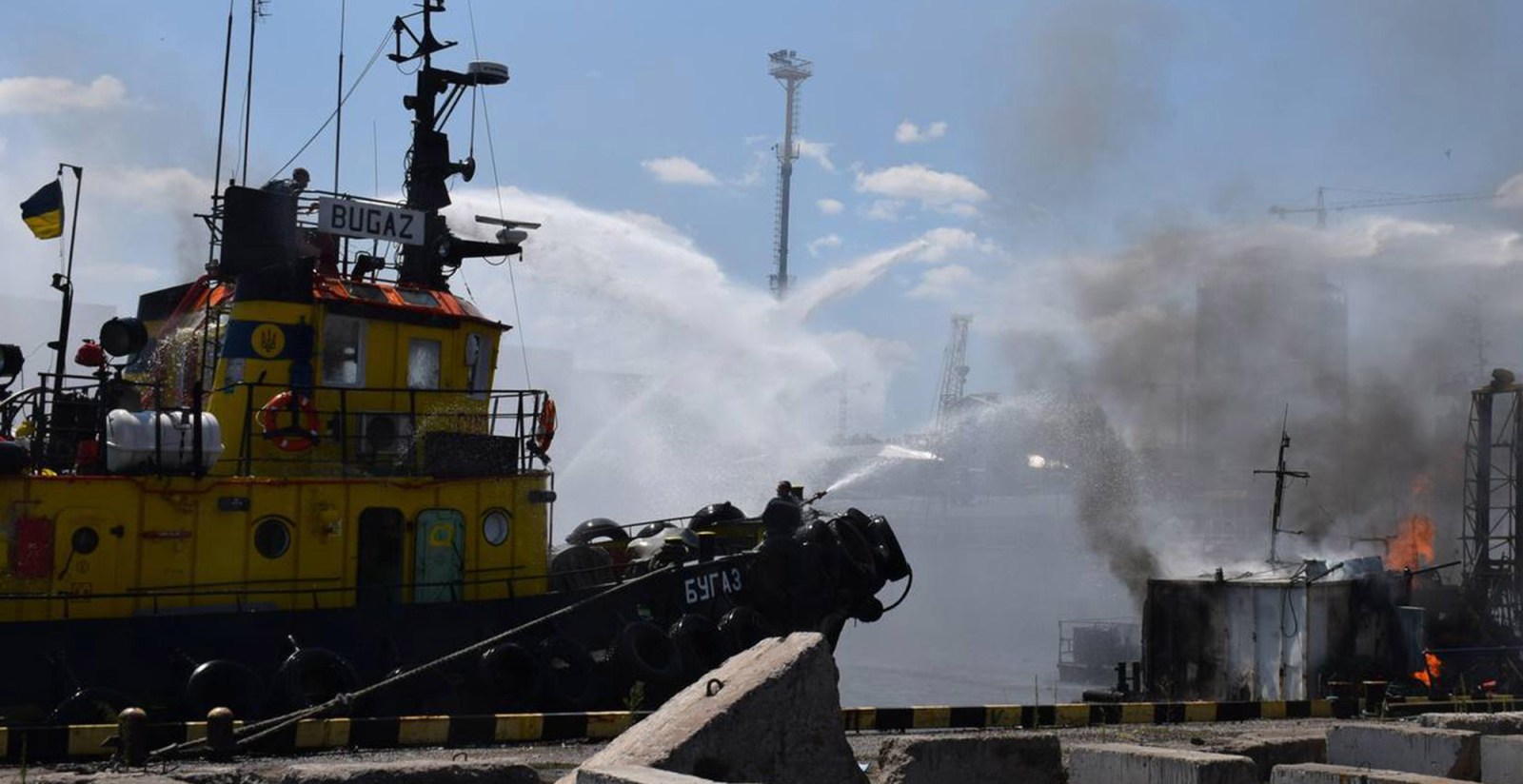 Firefighters work to put out a fire in the port of Odesa, southern Ukraine on Saturday, 23 July that Ukrainian authorities said had been caused by a missile attack. Moscow and Kyiv signed a landmark deal on 22 July to aid grain exports and ease an international food crisis. (Photo: EPA-EFE / Odesa City Hall Press Office)

Vladimir Putin’s invasion of Ukraine has reached the five-month mark. Russian Foreign Minister Sergei Lavrov started an African trip in Cairo, where he decried the role of economic sanctions in limiting Moscow’s food exports and said the UN must help resolve the issue.

Outrage was swift after Moscow struck Odesa’s seaport on Saturday, less than 24 hours after signing an agreement to guarantee the safe transit of Ukrainian grain exports. Russia said the strike targeted “military infrastructure.” Kyiv still hopes to load grain within a week and has put out a call for ships.

The US said the cruise-missile strike “casts serious doubt” on Russia’s commitment to the accord it co-signed, a deal that was brokered by Turkey and the UN after months of talks. UK Foreign Secretary Liz Truss said the strike showed the need for “a better way” of getting grain out of Ukraine.

Nord Stream 1 part could be on way to Russia soon

Siemens Energy AG on Sunday transferred a Canadian export licence to Gazprom PJSC that allows turbines for the Nord Stream 1 pipeline to be repaired and transported, Kommersant said, citing people it didn’t identify.

If the parties could exchange documents, the part could be on a ferry from Germany to Helsinki, and then transported on to Russia, in the next few days, the Russian newspaper reported.

Ukraine puts out a call for ships

Kyiv is beginning to prepare the Odesa, Chornomorsk and Pivdennyi ports to resume work, the ministry said.

“Entry to and exit from these sea ports will be conducted by the way of forming a caravan, which will be accompanied [by] a leading ship,” the ministry said.

Sergei Lavrov spoke in Cairo after meeting his Egyptian counterpart. He’ll visit Uganda, Ethiopia and Democratic Republic of the Congo in the coming days.

Russian food exports aren’t sanctioned, but trade has been crimped by what a UN official on Friday called “de-risking and overcompliance of the private sector.” After a memo of understanding was signed between Russia and the UN on Friday, the UN secretary-general “has volunteered to seek the removal of these illegitimate restrictions,” Lavrov said. “Let’s hope he will succeed.”

Ukraine continues to prepare to export grain under an agreement for safe transit signed Friday, despite Russia’s missile strike on Odesa on Saturday, an agriculture official said.

“We keep preparing as fast as we can,” Taras Vysotsky, first deputy minister for agriculture policy, said on Times Radio. A ship could sail within a week “if all the guarantees are followed up by our partners — I mean the United Nations and Turkey — and they can guarantee and ensure that Russia will meet the deal and is also going to fulfil them.”

The closing of the Jewish Agency’s office in Russia would be a serious event that would affect Israel’s relations with Moscow, Israeli Prime Minister Yair Lapid said at a meeting called to discuss the issue.

Russian authorities last week asked a Moscow court to liquidate a prominent group handling the emigration of Jews to Israel. A preliminary hearing is set for Thursday.

West ‘could provide up to 30 HIMARS-type systems’

The head of the US House Armed Services Committee said the US and its allies could provide as many as 25 to 30 multiple-launch rocket launch systems to Ukraine, including ones already sent.

Representative Adam Smith outlined the plans to US government-operated Radio Free Europe after he met Ukraine’s president on Saturday. The US HIMARS and similar systems have been effective against Russian arms depots and other targets in recent weeks.

Ukraine has requested at least 50 of the systems for defence and more for offensive operations. The US has delivered a dozen and approved four more in a new $270-million military aid package announced on Friday. “It is not a fact that our arsenal has 50 of these units,” Smith said. Bridget Brink, the US ambassador to Ukraine, said assistance would continue “for as long as it takes”.

It was Moscow’s first response to Saturday’s incident, about 24 hours after two missiles fired from a Russian ship in the Black Sea near Russian-occupied Crimea struck Odesa’s port. Another two were shot down by Ukraine’s air defences.

On Saturday, Turkey’s defence minister issued a statement saying Russian officials had denied involvement in the attack and were “investigating the matter.”

Moscow’s credibility is in shreds after Saturday’s Russian missile attack on Odesa, Zelensky said in a nightly video address on Saturday.

“If anyone in the world could still say that some kind of dialogue with it, with Russia, some kind of agreements are needed, see what is happening,” the Ukrainian president said. “Russian Kalibr missiles have destroyed the very possibility for such statements.”

“This apparent Russian barbarism brings us even closer to obtaining the very weapons we need for our victory,” Zelensky said. The Odesa Art Museum was also damaged in the strike, he said.

Russia’s missile strike on Odesa “casts serious doubt on the credibility of Russia’s commitment” to a deal to allow Ukrainian agricultural exports to resume through the Black Sea, US Secretary of State Antony Blinken said.

The attack undermines efforts by Turkey, the United Nations and Ukraine to get food to world markets, Blinken said on Saturday. “Russia bears responsibility for deepening the global food crisis,” he said.

The five lawmakers — Smith, three other Democrats and a Republican — also visited Bucha and Irpin, where they saw “evidence of the Russian atrocities” from the early days of the war, they said.

“We will continue to seek ways to support President Zelensky and the Ukrainian people as effectively as possible,” the group said in a statement.

The West should stop arming Ukraine and work for a peace settlement instead, Hungary’s Prime Minister Viktor Orban said at an annual retreat for supporters in Baile Tusnad, Romania. He said Moscow hadn’t been weakened by sanctions and that the rest of the world wasn’t joining in the repudiation of Russia.

“Yesterday, all parties made clear commitments on the global stage to ensure the safe movement of Ukrainian grain and related products to global markets,” Farhan Haq, deputy spokesman for Guterres, said in a statement on Saturday. “Full implementation by the Russian Federation, Ukraine and Turkey is imperative.”

Bridget Brink, the US ambassador to Ukraine, said Russia “must be held to account.” DM