Letter from Limpopo: Once upon a time, in lands of gold...

Letter from Limpopo: Once upon a time, in lands of gold and stone 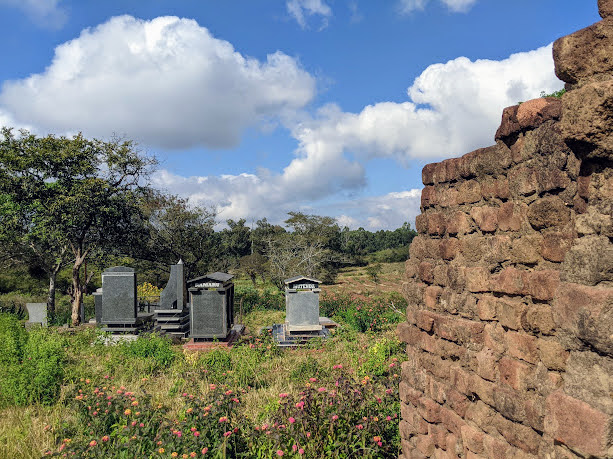 The graveyard of the Mulungwa clan, on Sweetwaters Farm. (Photo: Peterson Toscano)

Was it as representatives of Great Zimbabwe that the Lemba first arrived in what is the precolonial Venda kingdom, where they would, as they had done in so many other places, become a tribe-within-a-tribe? Here we pay a visit to their ancient community in Elim, a hot, dusty bushveld town where the hills are full of stories.

Here is a story passed down by word of mouth for three thousand years, which scientists today think may in fact be mostly true:

A very long time ago, a group of ancient Israelite traders settled in a Yemeni city called Senna. There, they moved goods by camelback between Arabia and Jerusalem.

When Muhammed unified the Arabian Peninsula in the seventh century, these merchants crossed the Red Sea, eventually settling near the medieval gold-trading port of Sofala, Mozambique.

Like other descendants of the ancient Israelites, these foreigners kept their culture intact by discouraging intermarriage, observing strict food taboos, and celebrating traditions unknown at the time to their neighbours, like male infant circumcision.

The tale goes that it was their success in the gold trade and their intimate knowledge of Levantine building techniques that persuaded Great Zimbabwe to enroll them as advisers, around a thousand years or so ago. There, these African Israelites became known as remba, later Lemba: from the Karanga kuremba, to pull down, because they were so loaded with their traders’ wares.

Was it as representatives of Great Zimbabwe that the Lemba first arrived in what is the precolonial Venda kingdom, where they would, as they had done in so many other places, become a tribe-within-a-tribe?

Interestingly, both linguistic and genetic analysis has supported core claims within the Lemba oral tradition. In 1992, religious historian Tudor Parfitt found an abandoned town called Sena in a Yemeni valley, where local clan names were similar to Lemba ones.

Then, in 1996, researchers reported that genetic analysis confirmed that Lemba DNA, in stark contrast to that of other sub-Saharan Africans, was mostly Middle Eastern and Semitic.

In Zimbabwe, the Lemba have built synagogues, including one near the ancient ruins they believed their ancestors helped build. Most of today’s 20,000 or so South African Lemba, on the other hand, live in the vicinity of Elim, Limpopo.

Having long been fascinated by this ancient group, I paid their community a visit this June.

Elim is one of those hot, dusty bushveld towns, shaded by jacarandas and fringed by dry yellow grass, where the hills are full of stories.

Modjadji and her rain queens once practised hydrokinesis in their green valleys immediately to the north. To the south lies Mount Thabakgone, where Zion Christian Church (ZCC) founder Engenas Lekganyane had his 1924 vision, inspiring him to found a new church. On the outskirts of the town sits Ribola Mountain, where a mudslide buried a village in the 1970s, because, or so say the locals, a group of young girls spied on the ancestral shades and saw more than was meant for mortal eyes.

We stayed in the Lemba-owned Shiluvari Lodge, a green, lush, perfectly-kept birding resort on the shores of Albasini Dam. When we were there, we were the only guests, other than the African darters poking their heads through the waves.

Our local guide was Aldrin Ndalani, a skinny, goateed, middle-aged Lemba man who had about him that gregarious charisma often found among those who spend their lives starting projects.

“Oh, it’s a passion!” he smiled, when I asked him why he was so interested in local economic development. Over the years, Ndalani has helped found an Elim youth centre; the Ribola Art Route; and, currently, a retreat centre, hotel, and museum.

We, in fact, later joined Aldrin for a tour of the art route, and thoroughly enjoyed ourselves. We visited wood sculptors Meshack Raphalalani and David Murathi at their home studios. We watched a jar being thrown at the Mukondeni Pottery Village. We examined colourful hand-printed cloths at Twananani Textiles, a cooperative founded in 1983 to preserve Venda women’s block printing traditions.

But I hadn’t come to Elim to have fun; rather, to learn about African Judaism.

“Well, the first point about Lembas is that today we are Christians as well as Jews,” said the Reverend MP Malema, also general secretary of the Lemba Cultural Association (LCA).

Over breakfast at the Mike’s Kitchen in the Makhado Crossings, Reverend Malema led us in an English-language grace, ending with, “In the name of Jesus”.

Speaking to the Jewish side of the equation, both Malema and Ndalani refused pork for breakfast.

And while any Star-of-David-wearing ZCC member would have done the same thing, to hear Malema and Ndalani talk, almost every distinctive aspect of Limpopo’s culture, from male circumcision to Zionist churches, derived from locals copying their Lemba neighbours.

“That’s one reason we found it so easy to affiliate with other tribes,” Malema says. “They adopted our Judaism!” And, it seems, vice versa, when it came to the Christianity of the local Swiss missionaries.

Once a year, in the southern spring, the three hundred or so members of the LCA all gather at Sweetwaters, a nearby farm co-claimed and today co-inhabited by a white farmer and a prominent Lemba clan. There, among other activities, the LCA celebrates a version of Passover, with the slaughtering of a sheep and the blowing of a kudu horn the Lemba, like other Jews, call a shofar.

Which is hard to do, when these traditions seem to be dying out, thanks to modernity, technology, intermarriage, and cultural dilution. Who, I asked Malema, still talks about these thousand-year wanderings, with all the highlights and lowlights of Lemba involvement?

“Only the old people,” Malema admits, with a sigh and a shrug. “How to get the youth interested?”

To that end, plans are at least afoot to turn the dilapidated, one-room schoolhouse on Sweetwaters, where many current Lemba leaders once studied, into a high-tech, interactive museum of Lemba history, where teenagers and others can wander through virtual reality reconstructions of Solomon’s temple, Sena’s marketplaces, Great Zimbabwe’s mines, and Sofala’s cosmopolitan docks.

Ndalani did take us to Sweetwaters on the last day of our stay, a quiet Sabbath Saturday. The hall where budgets are approved and Passover is celebrated was locked. But we wandered around grassy fields and through crumbling classrooms now housing three-legged iron pots and broken furniture.

Our last stop, appropriately, was the nearby graveyard of the Mulungwa clan. Here, Reggie Mulungwa, current occupant of the homestead on the property, talked about his family and their deep ties to this piece of land, the fact that his father had been a teacher in the local school, that Mulungwas lay buried in this graveyard since 1948.

The graveyards all faced north-west, to Senna as well as Jerusalem. Did Lemba ancestors wander the parched wadis of the Rub’ al Khali or the orchards growing on the faraway Mount of Olives?

The elaborate gravestones all featured, without exception, the Lemba Star of David, with the elephant in the centre, its trunk testing the slope of the up-facing triangle. This is perhaps the world’s most perfect badge representing the synthesis of Judaism and Africanism.

What would those elders say, if they could address us? What would they think of smartphones, video games, State Capture, the betrayal and collapse of South African democracy, the occupation of Palestine?

But the graves were silent, as tombs always are, and all we could do was imagine what the wind might whisper there among the tufts of elephant grass and the flowering lantana. DM

Glen Retief’s The Jack Bank: A Memoir of a South African Childhood, won a Lambda Literary Award.  He teaches creative nonfiction at Susquehanna University and is currently spending a year in South Africa as Fulbright Scholar.