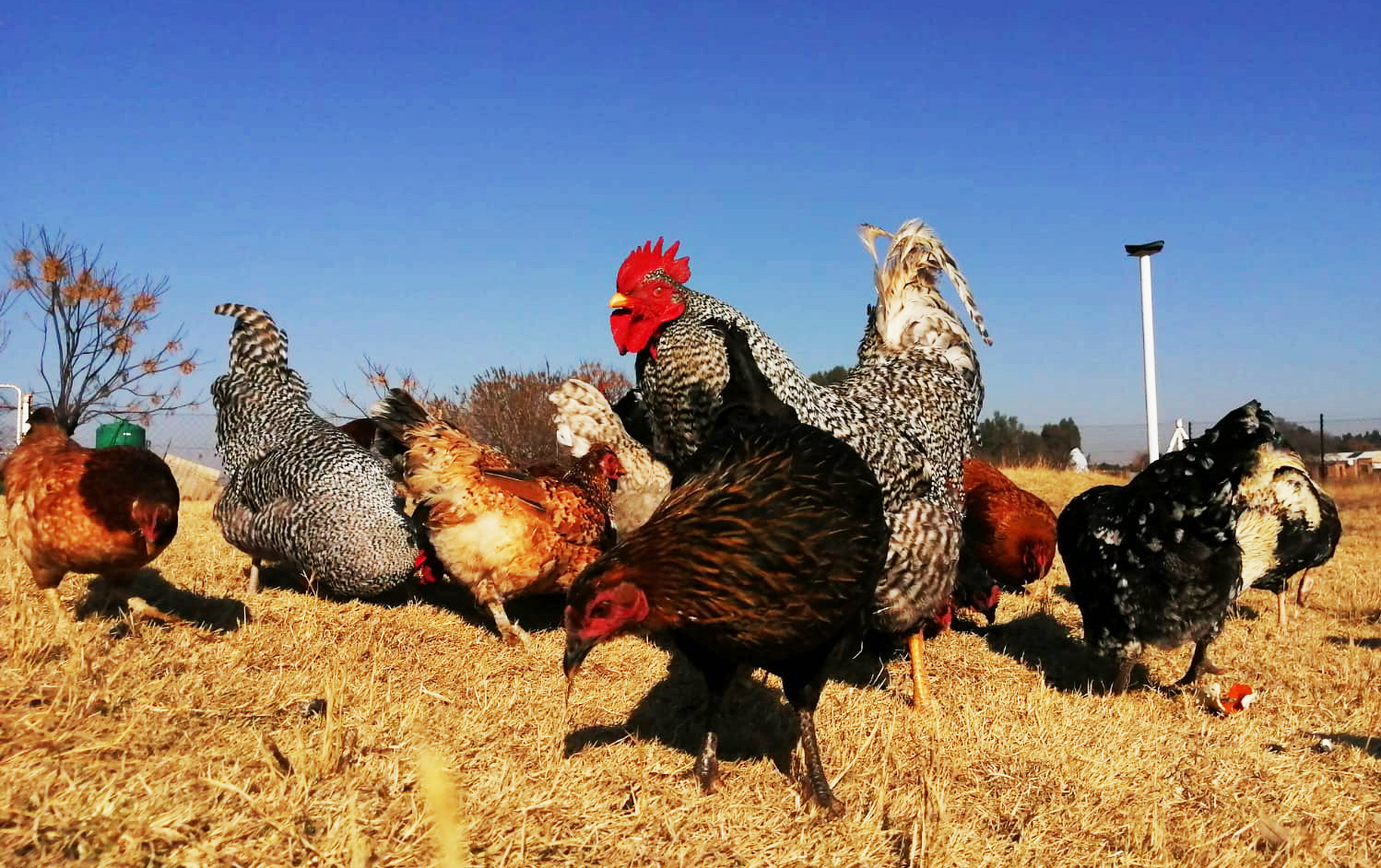 Defining hardbody chickens can be complex and controversial but everyone agrees that, cooked right, they are deeply delicious.

Not all hardbodies are created equal. Hardbody chicken is a southern African food phrase that almost all of us intuitively understand but many would struggle to precisely define. Part of the problem is that, while we all think we know what we mean when we say “hardbody”, it seems that we all mean something slightly different…

There is consensus that we are talking about an older chicken that has tough but flavoursome flesh and strong bones. We agree that birds with such bodies are best suited to long, slow cooking methods. Beyond that all bets are off. Slow Food Southern Africa activist and former butchery owner Caroline McCann says: “Hardbody is age-dependent, and the phrase requires further clarification to be useful. You need to know how the animal was reared and its breed to know what you are getting. It is akin to a phrase like ‘free range beef’ – that doesn’t mean grass-fed. Part of our problem is that as a nation we often use terms quite loosely. In some cases, there are precise scientific definitions and breed characteristics but these are not commonly known. So, for instance, a Cornish hen is actually a breed but in South Africa most people call any large, fat chicken a Cornish.”

Within McCann’s overarching definition, any older chicken regardless of rearing conditions is a hardbody. North-West chicken farmer Marie Sethunya (sort of) agrees that: “What you get in supermarkets in braai packs is called a broiler. That meat is soft. They only live three to four months before slaughter. Now a hardbody, most of the time it is those birds (they call them Hy-line silver and Hy-line brown) they are exceptional egg layers. They live long, their lifespan is one year, six to eight months and their meat becomes automatically hard so people call them hardbody.”

Izaak Breitenbach, General Manager of SA Poultry, confirms that: “There is what we call an ‘end of lay’ bird. Those that don’t produce eggs anymore. We sell about a million end of lay birds per month. They are sold into the live market, mostly purchased by cull buyers who distribute by way of small pick-up vehicles into townships and rural areas. The taste profile of those birds is different and tends to be favoured by those who want the whole bird, heads, feet etc and who prefer a firmer chicken with more fat on it. Flavour comes from fat so, cooked right, they can make for beautiful meals.”

Not everyone agrees. Heritage livestock farmer and activist Mike Gcabo says: “I think a hardbody must be free range, just being tough because of age is not enough to make a chicken a hardbody. An old layer is not it. It can be backyard township or countryside, but it must be free.” Chef Xoliswa Ndoyiya from Sanctuary Mandela, Johannesburg thinks rural is part of the picture: “Yes, they are older but it is that wide freedom of movement that matters. A hardbody is what we call umleqwa in isiXhosa. That means it is a bird that you have to run to catch. It has lived a free life, generally in the rural areas where you feed it but it is also scratching up insects and so forth. Those birds are full of flavour. Great for traditional stews. Lovely gravy.”

Chef Siya Kobo agrees: “Those older birds when you cook with them, they have much more flavour. The stock is very rich and ‘chickeny’. Even the rendered fat is lovely. I like to keep the fat in the fridge and use it to cook potatoes.” Burundian Chef Coco Reinarhz agrees: “We call them poulet bicyclette in Central Africa – the joke is that they get tough from riding a bike, all that muscle work, but the point is that they are older and richer tasting. The flavour and texture are a product of age and exercise and can be a good thing when cooked correctly because it means the meat can take bold, robust spicing.”

Kaya FM broadcaster Phemelo Motene makes a distinction between umleqwa and hardbody. She says: “For me a hardbody is more urban and not necessarily indigenous whereas an umleqwa is from a traditional breed, raised in rural conditions.” MasterChef SA judge Zola Nene disagrees: “I have always understood hardbody and Zulu chicken to be the same; not a specific breed or size but an older, traditionally reared fowl – the bones and meat are tougher because of age and the natural feed it eats. It’s that home rearing, free movement and pecking about that makes it hardbody. I have never heard anyone refer to an industrially farmed bird as a hardbody. Even if they are very old and tough, that is not a hardbody for me.”

Motene’s mention of indigenous and Nene’s observation about Zulu chickens adds another element. While Nene defines Zulu chicken by virtue of living a traditional lifestyle rather than breed, there are a range of landrace, heritage breeds generally named after and adapted to the areas in which they have been reared historically. As Sethunya says: “Those indigenous chickens, the ones with the mixed colours like those Venda chickens or what they call Sotho chickens, they take very long to grow, they can live more than three years. These are the most expensive, but they are very disease resistant, and they lay well. Broilers can die like nobody’s business but not the indigenous birds. They can live so well. Sometimes you can go a year without any mortality. And they taste so good when you do slaughter them. Strong bones. Good flavour. It is not just their age. It is something about the breed. Maybe it is also about the cooking skills and the time taken. In the rural areas people cook on fire. They give their cooking love in a way that urban people don’t have the time for. Whatever it is, those indigenous chickens taste superb. I include older layers and indigenous chickens in the definition of hardbody, but those heritage ones definitely rule in taste terms.”

Clearly, there are almost as many explanations as there are chicken enthusiasts. Those wishing to buy live heritage fowls can contact farmer Siphiwe Sithole of African Marmalade (R140 per bird).

Every township has many, many eateries offering hardbody birds. My current favourite is Mike’s Food and Car Wash in Alexandra where slow cooked, hearty, hardbody stews with rich, intensely savoury stock are always the order of the day (R80 with pap, spinach and chakalaka).

In the Cape, Chef Mmabatho Molefe at Emazulwini changes her menu regularly and last season offered a Zulu chicken’s foot terrine (R395 per person for 5 courses).

So, what are you waiting for? From comforting home cooking to fabulous fine dining, hardbody chickens rule the roost. DM/TGIFood

The author supports The Saartjie Baartman Centre for Women and Children in Manenberg.