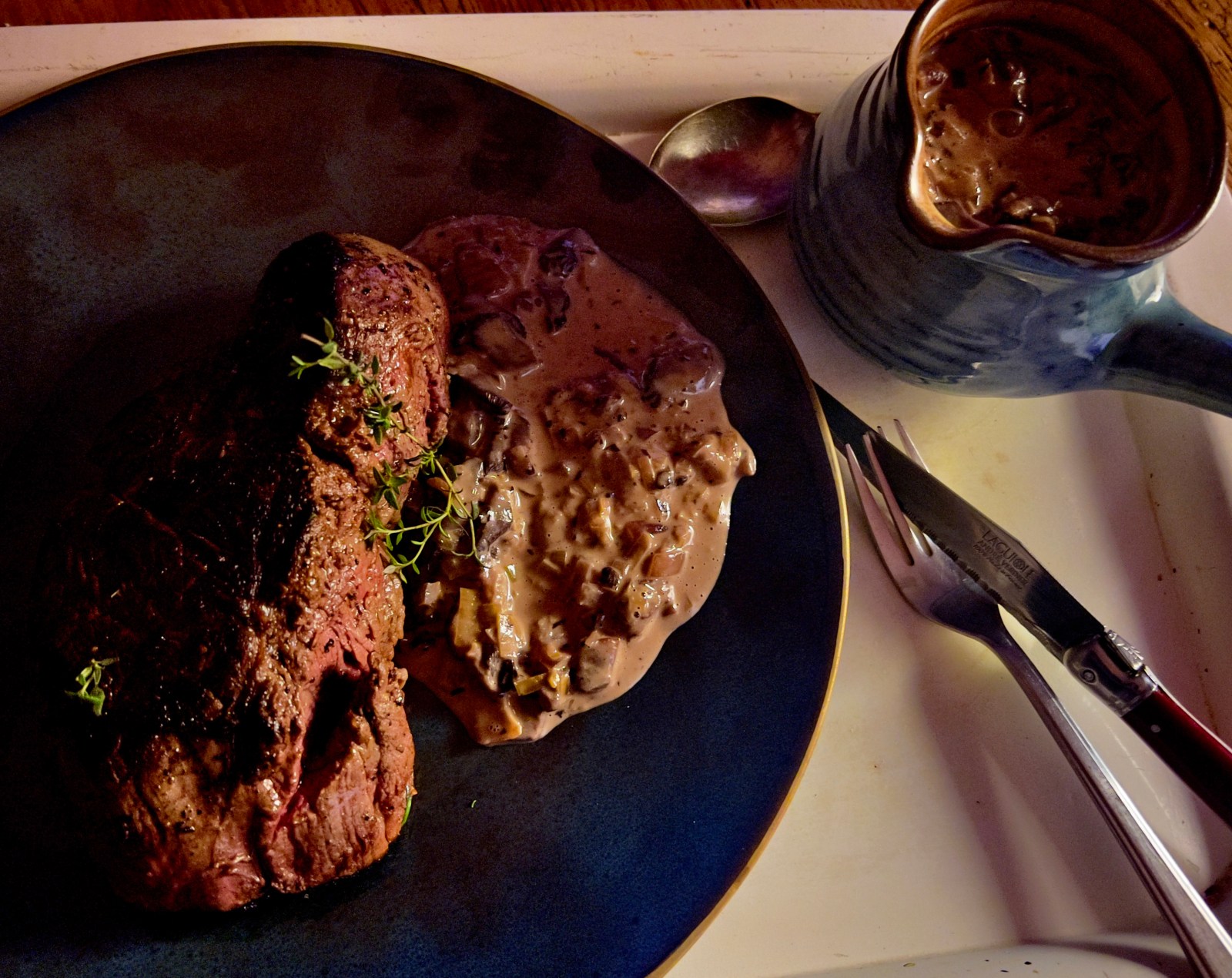 Mushroom sauce was always there, somewhere, on every restaurant menu. Sometimes, it even had mushrooms in it. But I wouldn’t put money on that.

In hotel dining rooms, steakhouses and a million other eateries, mushroom sauce has been offered with a steak, sometimes with chicken or veal, even fish on occasion, for what seems like forever. Nine times out of 10, it arrived draped over your steak as if the chef was ashamed of what lay underneath his gloopy, flour-thickened “sauce”; a “sauce” unworthy even of the word. So why, oh why, are mushroom sauces still made so badly?

That “mushroom sauce” beneath which, somewhere, out of sight, is the steak you ordered at the kind of steakhouse where the Cordon Bleu is called Gordon Blue and there’s still chicken schnitzel on the menu and has been ever since the joint opened in February 1963. The gloopy, flour-sodden “sauce” with no discernible sign of actual mushrooms, because the only mushroom in it is from a packet of soup granules. That is not a mushroom sauce.

If there’s one thing that has me red in the face at any restaurant and frothing at the bit, it’s a bad mushroom sauce. The kind of mushroom sauce in which the taste of flour dominates any remote vestige of hope that a mushroom, any mushroom, even one mushroom, had ever been within a city block of the kitchen where that sauce was “made”. The kind of mushroom sauce that, if you scooped some up and held it aloft, some of it would drip down below the spoon but most of it would be reluctant to let go, as if hanging onto the ladle for dear life. Because the balance is all wrong; it has no flow; it is an affront to the tradition of sauce making.

Key to using flour in a sauce is that it takes time to cook out; which means for the flavour of the flour to disappear, incrementally, over a full 15 minutes while the sauce is stirred over a low heat. If you are not prepared to spend that time in your restaurant kitchen so that we can be served a mushroom or any other flour-thickened sauce worthy of the name, find a naughty step, because that is not how to make or serve decent food.

Also, the amount of flour used to thicken a sauce should be sparing; only as much as it takes to thicken it a little. Reduction during that cooking time also thickens it. And you don’t want a gloop; a good sauce remains reasonably runny, even if somewhat thickened.

Nor does the flour have to be wheat flour as such. Cornflour is lighter and gives a sauce much less of a floury flavour, so requires less time to “cook out”. In fact, cornflour mixed with a little water or even milk acts to thicken a sauce or soup very quickly while leaving nothing of the impression that flour brings, badly, to its flavour.

But does it even need flour? A mushroom sauce doesn’t have to have any flour in it at all. In a perfect world, all mushroom sauces would be made with love and thickened only with a little cream after the essentials in the pan have first been cooked down with wine, and then leavened with, say, a little brandy or sherry. Then, with cream added, and seasoning, to finish it off gently for a few minutes while cream melds into it and lends it a lustrous finish.

All of which appears to be too much trouble for far too many “restaurateurs” who are happier to take shortcuts because it’s cheaper, it’s easier, and taking the trouble to do it well, to make something worth telling your friends about and writing songs about, is frankly not worth their effort.

Even though receiving our money is.

To try, desperately and pathetically, to set things to rights, this week I attempted to concoct a mushroom sauce recipe that is the antithesis of all that. I don’t doubt that it’s far too expensive and troublesome to make for many restaurants (heaven forbid that they might earn a few rand less for a plate in service of the higher goal of bringing us something we’ll adore), but whip this up yourself and, if you agree with me that it’s far better than steakhouse mushy gloop, use it as benchmark by which to judge the mushroom sauce you pay for in restaurants.

Let me know what you think, and drop me an email if you have your own mushroom sauce you’re proud of and which you’d like us to know about.

A pinch of black pepper

Melt the butter and sauté the shallots with the leeks and garlic until softened. Add the mushrooms and cook on a moderately high heat until they have released all their juices, then continue cooking until the juices have almost cooked away. This is a crucial step when cooking mushrooms; it makes all the difference and extracts the maximum flavour.

Deglaze the pan with the red wine and cook over a moderate heat until reduced by three quarters. Add the brandy and sherry and cook for another two or three minutes.

Add the beef stock, soy and fish sauce, heat through, then stir in the mustard and add the thyme leaves. Season to taste with your choice of salt and black pepper, cook for a minute or two, then stir in the cream, a little at a time, until it is all incorporated.

Bring it to a gentle simmer and allow it to cook gently while the cream infuses with the other ingredients and you end up with a luxurious sauce which has, please note, never seen so much as a whiff of flour. DM/TGIFood