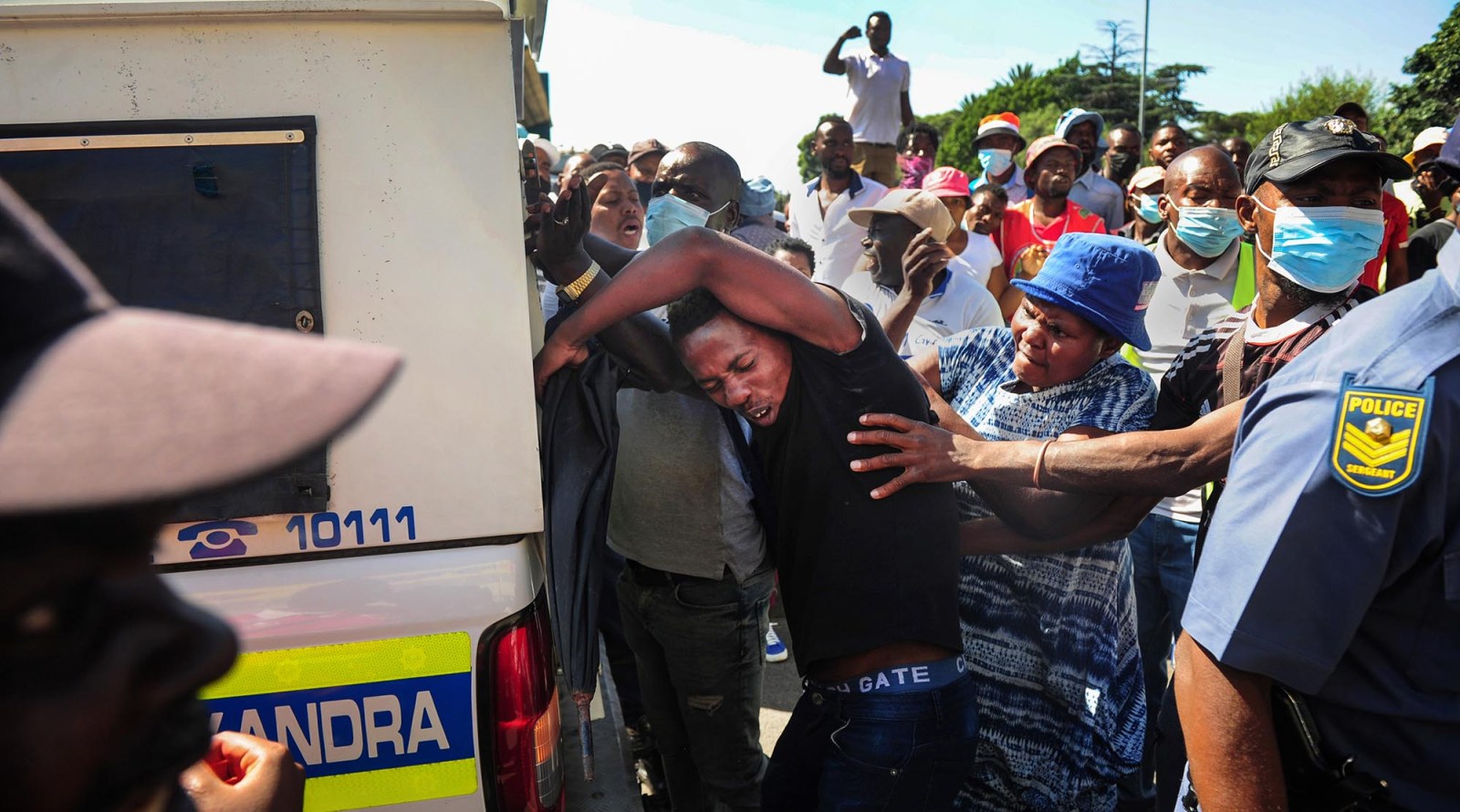 Police officers on the scene as South African citizens, who are members of Operation Dudula, clash with foreign nationals in the Alexandra township of Johannesburg, South Africa, on 30 March 2022. (Photo: Leon Sadiki / Bloomberg via Getty Images)

Undocumented immigrants often don’t report crimes perpetrated against them to the police, fearing that they may be detained for living illegally in South Africa.

The image of Nomsa Tshuma, wrapped in a blue blanket, inconsolable and defeated, should haunt our memories. On 6 April 2022, her husband, Elvis Nyathi, was beaten and burnt to death. He had been chased out of the family home by at least 30 Operation Dudula vigilantes, demanding to see proof that they were legally residing in South Africa.

Seven of the attackers have since been arrested and are awaiting trial, which starts this month. Tshuma is a crucial witness for the trial but she is refusing to return to South Africa because she has no residence permit, and this means her safety is not guaranteed. As a critical witness to the state’s case, the risk of her not testifying is that there may be no justice for her husband.

Nyathi’s case is not an isolated incident. In 2010, the South African Human Rights Commission report on the 2008 xenophobic violence noted that undocumented immigrants often did not report crimes perpetrated against them to the police, fearing that they would be detained for illegally residing in the country.

How many key witnesses to the 84 lives lost directly to xenophobic violence since 2008, have also failed to testify because of this fear? More recent work by the African Policing Civilian Oversight Forum (Apcof) suggests that the number could be significant. Drawing on research from the past decade, it suggests under-reporting of both crime and police misconduct by foreign nationals, driven in part by concerns about both the capacity and willingness of SAPS to address their safety and security needs.

This situation is incompatible with the constitutional requirement that the police deliver equitable services to all people who live in South Africa, regardless of their national or ethnic origin or immigration status.

Addressing systemic issues in policing and policing culture in South Africa is not a quick or easy fix. While there is ongoing work to improve policing responses and service delivery to non-nationals, experiences from elsewhere also provide insight into other measures that could be taken to improve justice outcomes for foreign nationals and their families.

To address similar challenges of access to justice, the US introduced the U visa facility, which enables undocumented non-nationals to report crimes and participate in the criminal justice system without fear of deportation. It guarantees temporary residence and work for four years to an undocumented migrant while their case is finalised.  This allows victims to cooperate with police during investigations and enables them to participate in court trials.

The importance of a U visa to the criminal justice system was illustrated in 2013, when a mother risked deportation by reporting her boyfriend to the police for raping her 13-year-old daughter. After reporting the crime, both the mother and daughter were denied government-aided therapy to deal with the trauma of the abuse because they were non-legal. Only once they were granted U visa certification were they able to access these resources and get the help they needed. The mother was also able to apply for work legally, effectively severing her financial dependence on her child’s abuser.

This is only one example of how the U visa can help victims come forward, identify and testify against their attackers, and also help victims and family members receive adequate care.

A temporary permit similar to the U visa could help reduce the barriers that prevent undocumented migrants in South Africa from reporting crimes and participating in courts because they are protected and incentivised to do so. Temporary protection from deportation would promote equality before the law and help uphold the constitutionally guaranteed human rights of undocumented victims of crime.

It would help reduce impunity for xenophobic violence, strengthen the rule of law, and allow migrant communities to become allies of the South African criminal justice system.

It could even make it possible for Nomsa Tshuma, and many others like her, to see justice done. DM/MC

Simbarashe Kaneunyenye is a forensic scientist-turned-criminologist, studying MPhil in Criminology, Law and Society at the University of Cape Town. His research focuses on the relationship between vulnerable migrant groups and crime. He is currently an intern at the African Policing Civilian Oversight Forum.