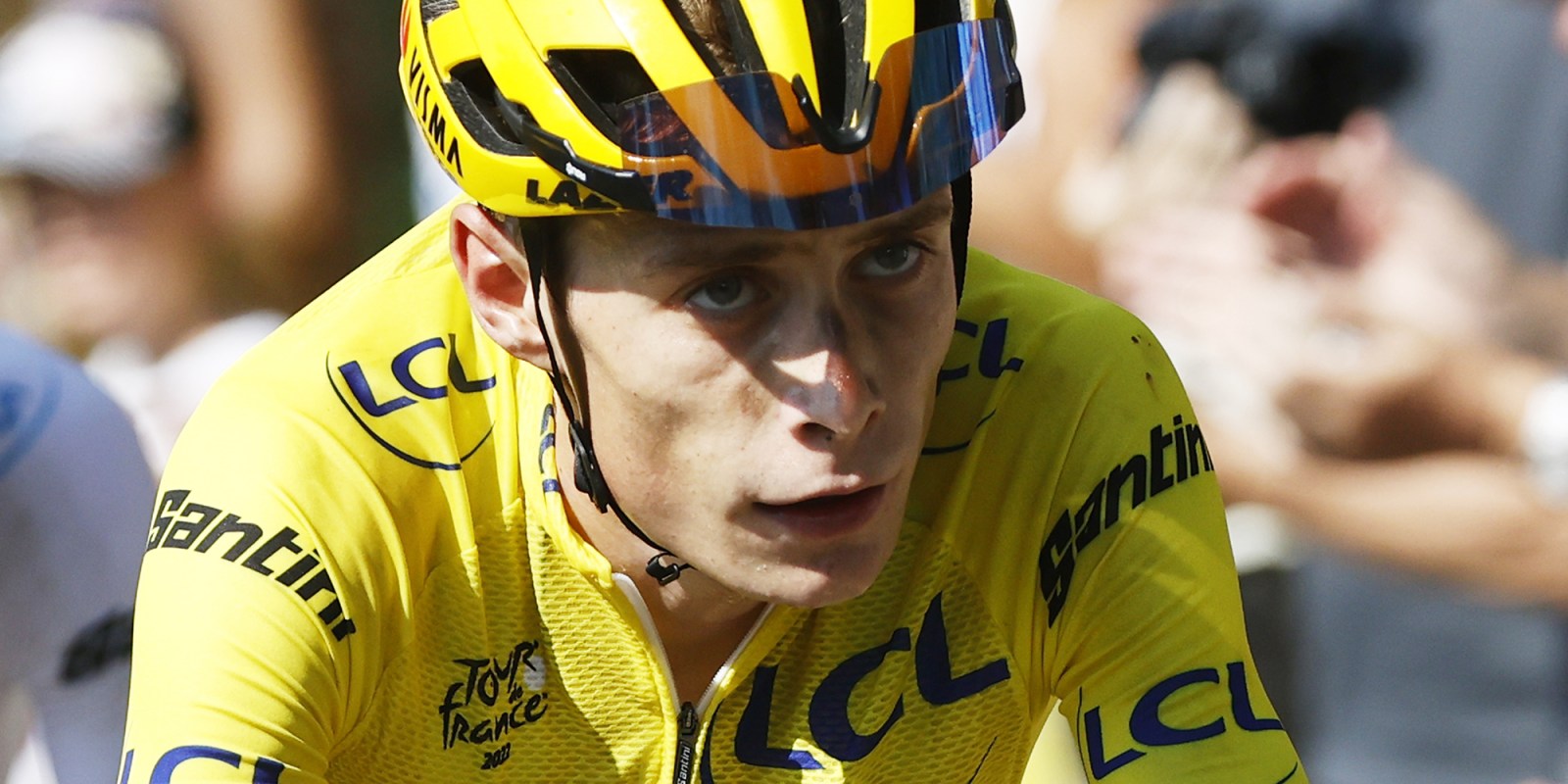 Denmark’s Jonas Vingegaard displayed his strength on the 2022 Tour de France on a dramatic day in the Pyrenees.

Jonas Vingegaard put the hammer down on the Tour de France on Thursday, extending his lead massively with an awe-inspiring victory in the final mountain stage, as defending champion Tadej Pogacar’s all-in strategy backfired.

Vingegaard went solo some four kilometres from the finish at Hautacam after massive work from his Jumbo-Visma teammates, Pogacar slowly disappearing from his rear-view mirror and crossing the line in second, one minute and four seconds behind.

The 23-year-old Pogacar now trails the Dane by 3:26 ahead of Saturday’s individual time trial after a flat 19th stage on Friday.

The Slovenian threw everything at Vingegaard in the penultimate climb to the Col de Spandelles, also throwing caution to the wind in the descent on a gruelling 143.2km trek from Lourdes.

Pogacar crashed after Vingegaard also came close to hitting the deck and, after the duo called a brief truce, the strongest climber prevailed where his compatriot Bjarne Riis produced in 1996 one of the most astonishing efforts ever seen on the Tour.

Riis later admitted taking performance-enhancing drugs to win that Tour and his name was taken off the list of champions in 2007, only for the International Cycling Union to add it again following legal examination of the case.

“I won the stage and I’m happy about it. There’s still two stages and the time trial. I have not won the Tour yet … we have to take it day by day,” Vingegaard said after his second stage win of the race.

“Today Jumbo were so strong. I tried … I went all in for the yellow but in the end, when I crashed, I lost a bit of motivation for the final climb – but I still pushed my limits. I’m proud of what I did today,” he said.

Pogacar attacked about six kilometres from the top of the Col de Spandelles but Vingegaard followed, barely getting out of the saddle in a stunning show of power and control.

The Slovenian went for it again four more times on that climb with Vingegaard always covering, and the duo whizzed past Geraint Thomas, who had gone solo earlier.

The 2018 champion again limited the damage, taking fourth place, 2:54 off the pace to all but ensure he would finish on the podium in Paris.

The Ineos-Grenadiers rider is eight minutes behind Vingegaard, but holds a comfortable 3:05 lead over fourth-placed David Gaudu.

Unable to drop Vingegaard on the climb to the Col de Spandelles (10.3km at 8.3%) Pogacar took big risks in the descent.

In his slipstream, Vingegaard lost his balance on a bend, just managing to stay on the bike. A few turns further down the road, it was Pogacar who skidded off into the gravel on a left-hand turn, sustaining bruises in the process.

Vingegaard slowed down and shook hands with Pogacar as both finished the descent in a more cautious fashion, allowing a five-man group led by Thomas to bridge the gap in Argeles Gazost, where French president Emmanuel Macron climbed into the car of race director Christian Prudhomme.

Vingegaard, Kuss and Pogacar caught Van Aert and Dani Martinez, the last survivors of the day’s breakaway and shortly afterwards, the yellow jersey holder made his move as his main rival was losing contact.

Vingegaard completed a resounding victory and Van Aert, who had attacked from the start, secured third place on the day.

While Pogacar won the last two editions of the Tour de France mainly through his individual talent, his likely successor, Vingegaard, has relied on a formidable team and the jaw-dropping performances of Van Aert.

The 27-year-old Belgian, initially a cyclocross and one-day race specialist, jumped away from the peloton from the gun before setting a devilish pace on the final climb after being caught by his leader Vingegaard and Pogacar.

He then took an astonishing turn on the steepest part of the ascent and his pace was too furious even for Pogacar, who lost contact and saw Vingegaard disappear up the road.

The Slovenian picked himself up to go past Van Aert, but the Belgian still managed to finish third, a year after claiming a stunning win on the Mont Ventoux at the end of an epic breakaway.

“To have Wout van Aert, the best rider in the world, as a helper, is incredible,” said Vingegaard, who also paid tribute to his other teammates.

Sepp Kuss has been instrumental on key mountain stages and 2020 runner-up Primoz Roglic sacrificed his own chances in a memorable tactical move that ended up with Pogacar cracking on the Col du Granon in the Alps.

“The Col du Granon stage and today are two really good examples of how strong this team is,” said Vingegaard.

Jumbo-Visma were down from eight to six when Roglic and Steven Kruijswijk abandoned on Sunday, but sports director Frans Maassen was not too worried.

“Two guys less, but we have Wout, who counts for three,” he said.

Such is Van Aert’s talent that many wonder whether he can gun for the overall title in future.

“Wout is of course one of the best riders in the world on all terrains. But I don’t think he has ambitions for the general classification,” said Vingegaard.

“But if he does, we can share the leadership. I shared the leadership this year with Primoz and I think in the end it’s actually better to have two leaders.”