A first look at Mark Winkler’s new novel, ‘The Erro...

A first look at Mark Winkler’s new novel, ‘The Errors of Doctor Browne’ 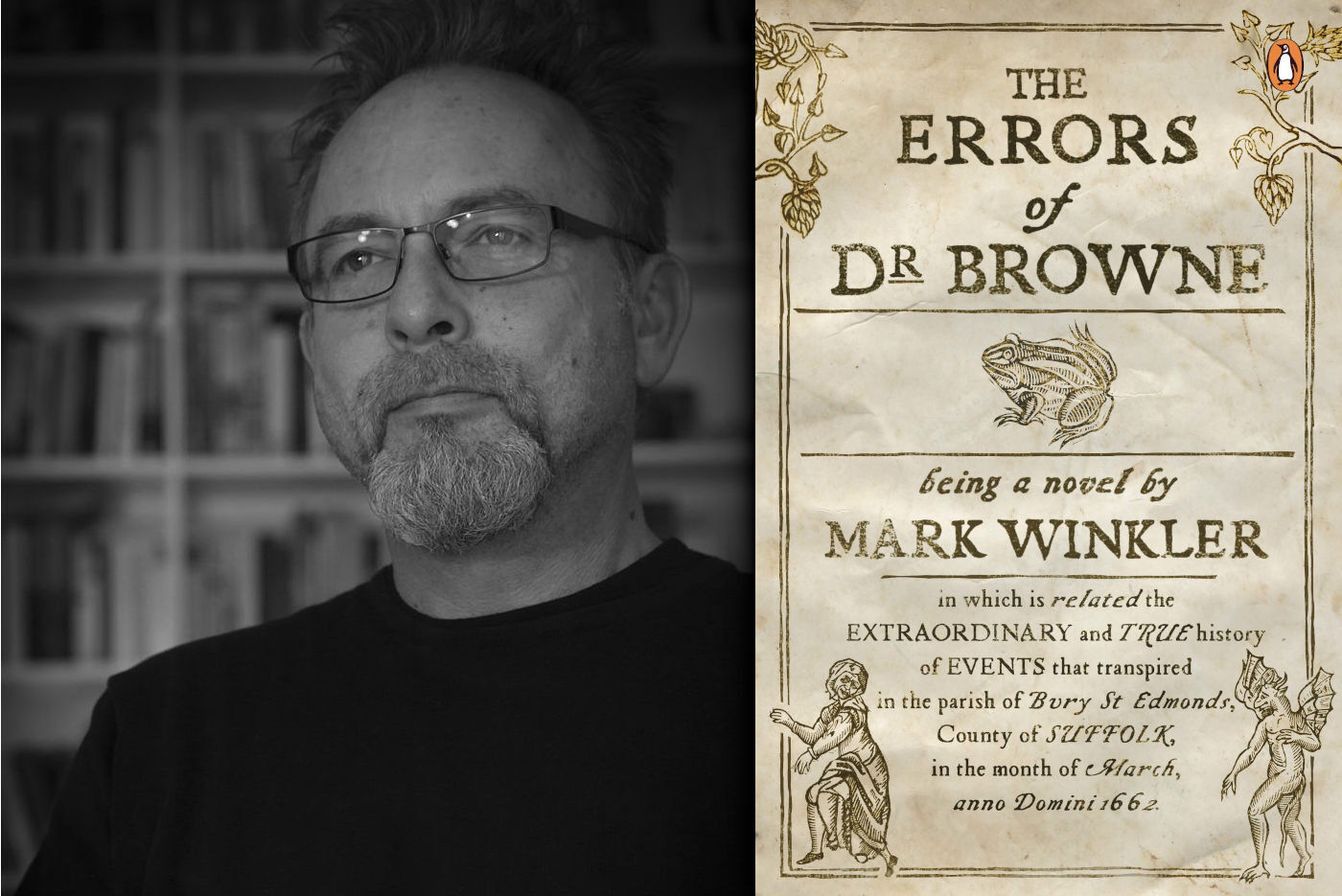 Author Mark Winkler (left) and the cover of his latest book, 'The Errors of Doctor Browne'. Images: Supplied / The Reading List

Winkler’s latest book, The Errors of Doctor Browne, is a wry and insightful glimpse into the limits of reason, the patriarchal need to control every aspect of womanhood, and our ongoing preoccupation with reputation.

Mark Winkler is the author of the critically acclaimed novels, An Exceptionally Simple Theory (of Absolutely Everything), Wasted, (published internationally as My Name is Nathan Lucius), The Safest Place You Know, Theo & Flora and Due South of Copenhagen. He has been shortlisted for the Sunday Times Fiction Prize, and his work has been published worldwide in English and in French translation.

His new novel, The Errors of Doctor Browne, is set in Bury St Edmonds in Suffolk in the UK, 1662, when two widows are charged with acts of witchcraft. It’s one of England’s last witch trials. Doctor Thomas Browne, philosopher, natural scientist, logician and medical doctor, accepts the role of both inquisitor and witness, embarking on what his biographer later calls ‘the most culpable and stupid action of his life’.

The Errors of Doctor Browne is a wry and insightful glimpse into the limits of reason, the patriarchal need to control every aspect of womanhood, and our ongoing preoccupation with reputation.

The book will be released on the 1st of August. This is an excerpt.

It was late in the day, then, and early in the evening, when I found my way down Cook Row to the marketplace, a muddy plot beneath which there may or may not have been cobblestones, and from which the stench of fish guts and curdled milk arose. A single tardy merchant remained from the day’s business, packing his unsold and dripping wares onto a cart. I hailed him and enquired where I might find Moyse’s Hall, or better yet, the judge Sir Matthew Hale, who was to preside over the Lent Assizes at the Shire House. The man made narrower his already narrow eyes and looked me over shamelessly – up, down, this way and that, stopping short of lifting my lip to check my teeth – before pointing out the Hall across the square, an ancient building much abused by the passage of time. Therein I found Sir Matthew, at a table pulled close to the fireside in the draughty chamber, surrounded by papers in stacks and books in piles and half a dozen flickering tapers, quill in hand, wig set aside, himself wrapped in furs to a point where only the sharpest features of his face were visible.

‘And you are?’ Sir Matthew asked as I approached, so occupied by his work that he had failed to look up.

‘A physician and author, and an examiner of the natural world, at your service.’

‘Ah, my old friend Doctor Browne,’ he said, rising to his feet with his pen still in his hand. ‘You have forgotten “philosopher” and “logician” in your introduction. I feared you had become lost, or fallen victim to brigands en route.’ He drew back the furs from his face, revealing large and papery ears, a small bald head so tightly wrapped in skin that from it the skull threatened to burst forth, and upon this covering not a hair, neither eyebrow or eyelash, as if some alopecia had deprived him of every living follicle.

‘It is two days from Norwich, and I received your summons but three days ago.’

‘Of course,’ Sir Matthew said and grunted as a more substantial man might, gesturing at a chair with his pen, which he wiped with an inky rag and placed on the stand beside the inkpot, and from the table he picked up a small bell and rang it. A door creaked in the shadows and a maid emerged into the firelight, hastening towards us and bobbing in a curtsey, whether towards Sir Matthew or towards me I could not say.

‘My Lord?’ she said in a voice so meek I could barely discern it.

‘Wine,’ Sir Matthew said, looking to me rather than the woman, and continuing to do so long after she had scurried off. ‘We face a matter that will require some circumspection, Doctor Browne,’ he said once the door had closed. ‘By “we”, I mean myself as the judge at the Assizes, the officers of the Court, and you, by extension, should you accept this commission.’ He placed his elbows upon the table and joined his hands beneath his chin, gazing upon me as if awaiting a question, but I had none. ‘You are a learned man and will certainly know that trials, as they pertain to witches, are fast falling from favour in this modern world.’

‘Witches, did you say, Sir Matthew?’

‘Witches, Doctor Browne. Charges have been brought against two women of Leystoff parish, and thus a trial of witches is what awaits us.’

‘A trial of witches,’ I repeated, unable to keep the wonderment from my voice, and considering, at the same time, whether what confronted us might better be termed ‘a trial of women’ until such time as they were indeed shown to be witches. ‘And I had thought that such matters belonged to a more superstitious past.’ DM/ ML