Polar bears scavenge on garbage to cope with vanishing... 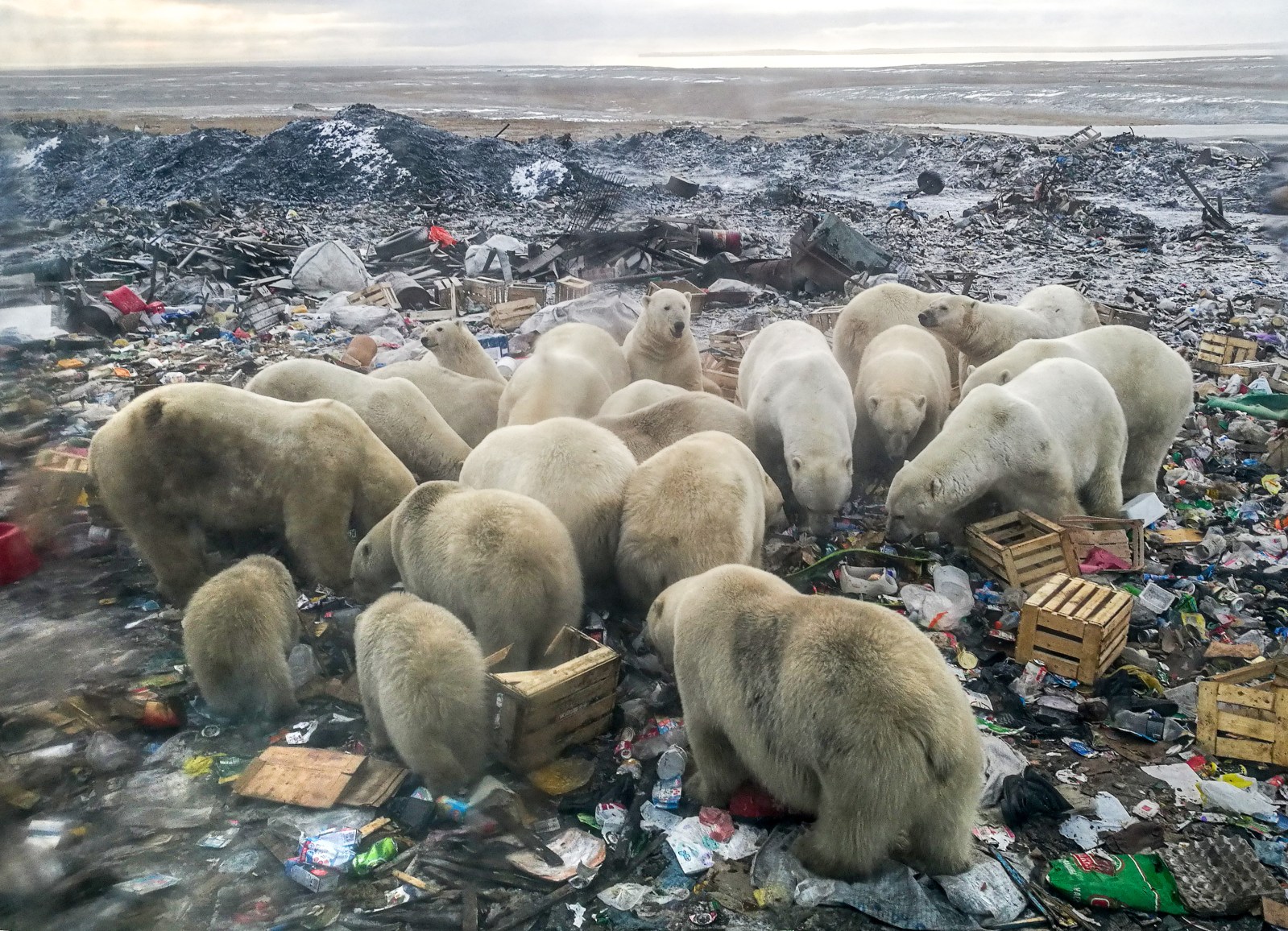 In this 2019 photo, polar bears feed at a garbage dump near the village of Belushya Guba, on the remote Russian northern Novaya Zemlya archipelago, a tightly controlled military area where a village declared a state of emergency in February after dozens of bears were seen entering homes and public buildings. (Photo: Alexander GRIR / AFP)

The climate crisis is being felt and dealt with in various ways worldwide. In this daily climate brief, we aim to give a round-up of the latest developments and news from across the globe.

Hungry polar bears are turning to garbage dumps to fill their stomachs as their icy habitat disappears.

On Wednesday, a team of Canadian and US scientists warned that trash poses an emerging threat to already vulnerable polar bear populations as the animals become more reliant on landfills near northern communities. This is leading to deadly conflicts with people, the report published in the journal Oryx said.

“Bears and garbage are a bad association,” said co-author Andrew Derocher, a biologist at Canada’s University of Alberta. “We know that very well from a brown bear and black bear perspective, and now it’s an issue developing with polar bears.”

Polar bears rely on sea ice to hunt seals. But with the Arctic warming four times faster than the rest of the world, sea ice is melting earlier in the summer and freezing up later in the autumn. This forces bears to spend more time ashore, away from their natural prey.

To fatten up, the report said, polar bears are now gathering en masse around open dumps in places in the Arctic and sub-Arctic such as Russia’s Belushya Guba, and at whalebone piles left over from Inuit hunts near Kaktovik, Alaska.

Such behaviour is risky. Local wildlife managers may kill bears out of concern for public safety. And consuming garbage can make bears sick.

Wrappers are often frozen into food scraps, so polar bears end up eating plastic and other non-edible materials. This can cause fatal blockages.

“Bears don’t know all the negatives that come with plastic ingestion and the diseases and toxins they’re likely exposed to in a [landfill] setting,” said co-author Geoff York, senior director of conservation at Polar Bears International, an advocacy group.

The situation, scientists said, is likely to get worse. Human populations are increasing in the Arctic. Nunavut, Canada, — where thousands of polar bears live — is projected to grow by nearly 40% by 2043.

Diplomats from 40 countries meeting in Germany for a two-day summit made some progress in negotiating how wealthy nations should compensate developing countries for the losses and damage caused by climate change.

“We, as industrialised economies, have to live up to our responsibilities and promises that we made in Paris,” said German Foreign Affairs Minister Annalena Baerbock as the talks started. “Industrialised countries have a special responsibility as big emitters.”

Led by the foreign ministries of Germany and Egypt, the annual Petersberg Climate Dialogue in Berlin followed a similar gathering in the German city of Bonn that took place a month ago. These smaller meetings throughout the year allow climate diplomats to work on the technical details that could lead to bigger deals signed at the United Nations-sponsored Conference of Parties, or COP, talks. This year’s COP is due to take place in November in Sharm el-Sheikh, Egypt.

During the Bonn meeting in June, developed nations refused to put the issue of compensation on the official agenda for COP27 in Sharm el-Sheikh, outraging delegates from developing nations and climate activists.

The contentious question of how rich countries should compensate poorer ones is known in climate policy jargon as “loss and damage”. Wealthy nations have emitted the lion’s share of the greenhouse gases that are warming the planet, but developing nations are suffering the most from extreme events linked to global warming.

“There’s still a lot to do until COP27,” said Carolina Cecilio, a policy adviser on risk and resilience at the Brussels nonprofit E3G. “But I think that because there was an open and honest exchange in small groups, they might be moving toward an acceptance that loss and damage have to become an agenda item of some sort.”

A failure to address the issue at the highest level would mean a failure for the COP27 meeting, the first COP to take place in an African nation since 2011, said Mohamed Adow, director of energy and climate at the think tank Power Shift Africa.

A surge in renewable power coupled with a slowdown in China will see carbon emissions from electricity production ease from the record level last year, according to the International Energy Agency (IEA).

Emissions from power generation are set to decline by about 0.3% this year, down from a forecast in January that emissions would remain flat, the IEA said in its Electricity Market Report. That pace will need to increase more quickly to get the world on a trajectory that will avoid the worst consequences of climate change.

Measures to restrict the spread of Covid-19 in China have contributed to a slowdown in industrial activity, as well as supply restrictions in the US that will nearly offset higher coal-fired power output in Europe. Overall, coal generation is set to increase by about 0.3%, lower than the IEA’s previous forecast. Next year, the IEA expects coal generation to decline by 1%.

Renewable power is set to grow by 11% this year, as demand grows around the world for alternatives to increasingly expensive fossil fuels.

Overall, global electricity consumption in 2022 is set to increase by 2.4%, similar to the average from 2015 to 2019, but lower than the 3% growth the IEA forecast at the beginning of the year. DM