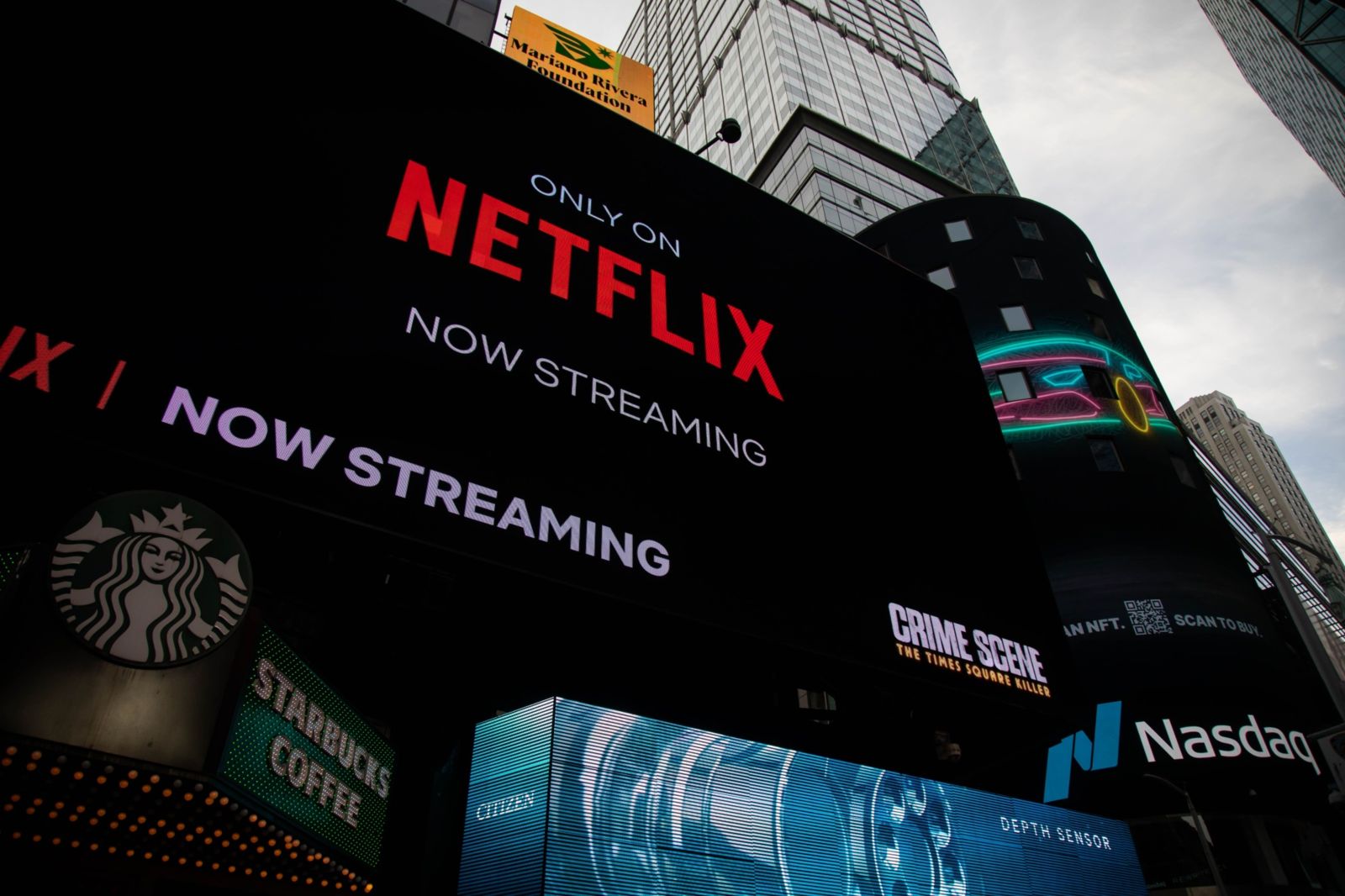 Netflix signage next to the Nasdaq MarketSite in New York on Friday, 21 January 2022. With the worst start of a year in more than a decade and a $2.2 trillion wipeout in market value, the Nasdaq Composite Index couldn't have had a messier kickoff to 2022. (Photo: Michael Nagle/Bloomberg)

Korea’s entertainment stocks have been much sought-after following a number of blockbuster hits and the growing appeal of its pop culture, with popular shows delivering stock price gains to companies involved in their production and distribution.

A new Netflix hit is supercharging the South Korean drama producer behind the series, as traders hunting for the next “Squid Game” pile in to grab opportunities in a sagging stock market.

Astory has rallied 82% in July, boosted by the instant hit of “Extraordinary Attorney Woo” released at the end of June. The courtroom drama about a rookie lawyer with autism spectrum disorder was the most watched non-English show on Netflix during the two weeks ended July 17.

The sharp gains for Astory, one of Korea’s leading drama producers, follows a months-long slump that saw the stock shed nearly 70% from its October high. Korea’s entertainment stocks have been much sought-after following a number of blockbuster hits and the growing appeal of its pop culture, with popular shows delivering stock price gains to companies involved in their production and distribution.

“We can expect more profit in the future as many channels are already proposing the second season,” Ji InHae, an analyst at Shinhan Investment Corp., said in a report.

Shares of Korean drama and other content companies jumped on Wednesday after Netflix’s earnings results showed customer growth in Asia, helping the streaming giant offset declines in the US and Europe. Bucket Studio and Pan Entertainment surged more than 12% each.

Other stocks have also benefited from the popularity of “Extraordinary Attorney Woo.” Satellite broadcasting provider KT Skylife Co., which owns the Korean channel that airs the legal drama, saw its stock price rise over 11% so far this month. The benchmark Kospi has gained less than 2% during the period, while the smaller Kosdaq Index advanced 5%.

“Skylife is expected to see a level-up in its ads revenues and increased competitiveness in its channel,” said Ji.

The phenomenon, to some extent, resembles the stock-market frenzy surrounding “Squid Game” last year, when dozens of local TV and movie producers saw their stock prices skyrocket amid investor euphoria and interest from global companies including Walt Disney and Apple.

Korea’s entertainment stocks, however, see sharp volatility depending on the cycle of a series, and the fading pandemic boost to its main platform – Netflix – is a case for caution to investors keen to jump on the rally. Even with this month’s surge, Astory remains down more than 30% from October.