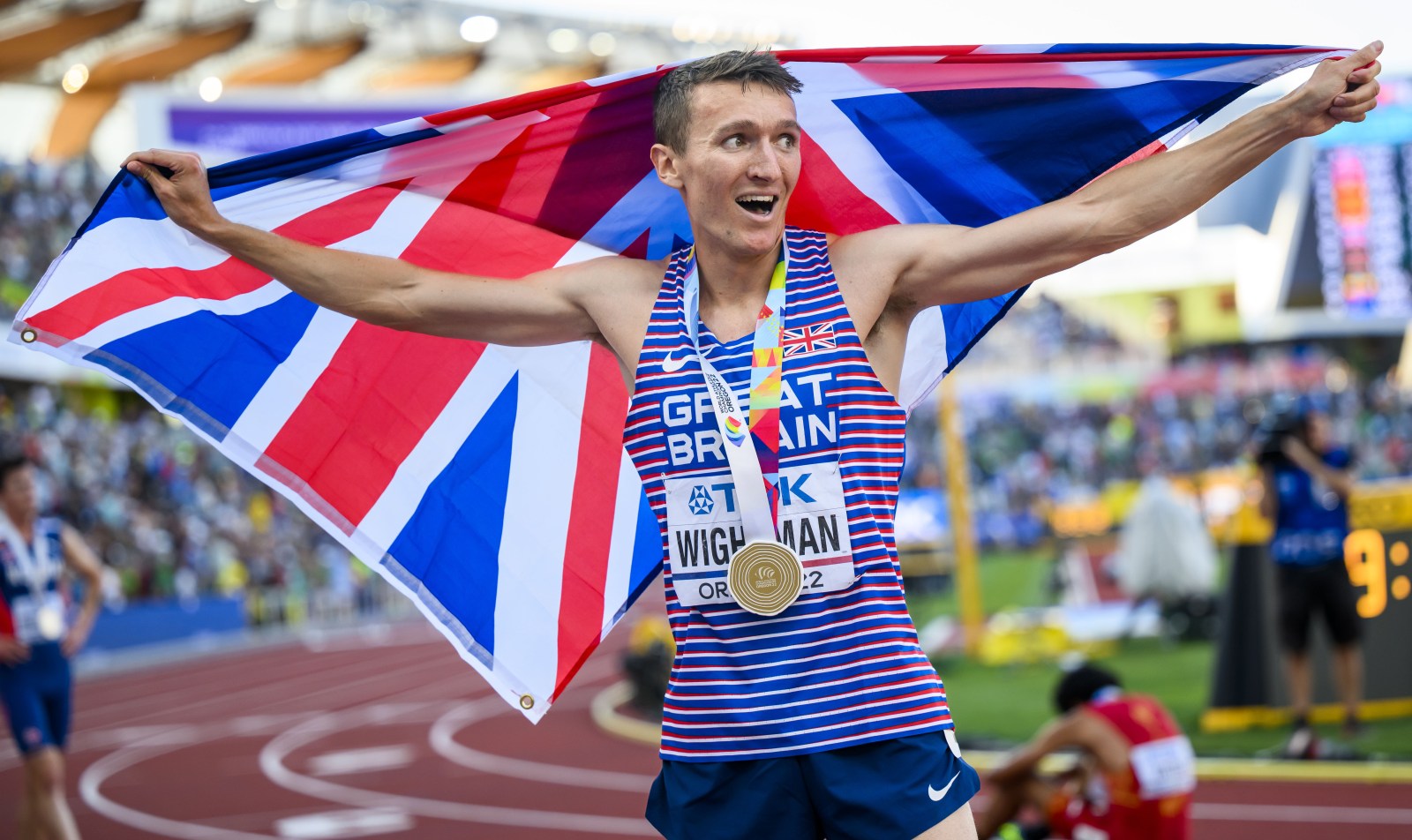 Britain won its first 1,500m world championship gold medal since Steve Cram in 1983, when Jake Wightman clocked a stunning sub 3:30 to win in Eugene on Wednesday.

Briton Jake Wightman took a superb World Athletics Championships 1,500m gold as he outkicked Olympic champion and hot favourite Jakob Ingebrigtsen on the final lap on Tuesday, with his proud father Geoff calling him home as the stadium announcer.

Wightman’s father and coach, used to the combination by now but never previously seeing such a victory, somehow kept his emotion in check as he called his son home, though he did allow himself a moment to announce to the Hayward Field fans: “That’s my son and he’s world champion.”

On an emotional night all-round, Wightman celebrated the first world championship gold in the event for former middle-distance powerhouse Britain since Steve Cram – also in the stadium commentating for the BBC – in the first event in 1983.

Wightman’s winning time of three minutes, 29.23 was the fastest in the world in 2022 and underlined his pedigree. Ingebrigtsen took silver, with Spain’s Mohamed Katir finishing strongly for bronze, just ahead of compatriot Mario Garcia.

Kenyan duo Timothy Cheruiyot and Abel Kipsang set the early pace but when Ingebrigtsen eased to the front with two laps to go there looked to be only one winner.

Wightman, however, is a notable tactical racer and was not about to sit back and watch the show. He stayed tight on Ingebrigtsen’s shoulder and then did what almost nobody does – went alongside the Norwegian on the back straight of the final lap and then got his shoulder in front with 200m to go.

“I just felt so good that I knew there was a shot at it. All I wanted to do was challenge him and whether that comes away with a medal, or just make some impact on the race and you know, take the risk to try and win it,” he told reporters.

“It probably won’t sink in until I have retired, I don’t think.”

With Ingebrigtsen unable to respond, Wightman then drove on to cross the line looking utterly shocked, nearly a year after he finished a disappointing 10th at the Tokyo Games.

“It’s mad. I had such a disappointing year in Tokyo last year. I don’t think people realise how crushing it was to go in with such high expectations and come away hoping for a medal but end up 10th,” he said.

“I had to take the pressure off and the only thing that could happen was that it was a better run than last year.”

Ingebrigtsen said: “I felt good but I made some mistakes and didn’t keep up in the last 200. I’m owning it, but somewhat disappointed. It’s an honour to get a medal, of course, and I’m very happy for Jake.”

While the hype heading into the final had largely focused on a showdown between Norwegian Olympic champion Warholm and his American rival Rai Benjamin, the Tokyo bronze medallist had the victory in hand down the final straight in a championship record.

Dos Santos exploded off the blocks and stretched his arms out wide as he glided through the finish with ease and held his hand to his ear, urging on cheers from the crowd after the remarkable upset.

“The energy of the crowd was amazing. I felt their love, people hugging me,” he said. “When you win, you start being everyone’s favourite. That’s pretty awesome to win the world title on this track.”

Benjamin had a fighting chance until the ninth hurdle, when he slowed dramatically before finishing more than half a second slower for his second consecutive world silver.

He told reporters that he drew strength from the home crowd at Hayward Field to keep himself on the podium.

“I am grateful for silver. I got it done. I chopped a few hurdles and my race plan went out the window, but when I heard ‘USA, ‘USA’, I ran as fast as I could to keep my second place,” he said.

Warholm had twice broken the world record in 2021 but walked into Eugene, Oregon, with a question mark over his head after suffering a hamstring tear in June, having not completed a race in 10 months.

He hyped himself before stepping into the blocks, deploying his trademark smack to the face, and appeared to be still in contention for the podium until after the final turn, but he struggled down the final metres of the race to finish seventh.

“It was a very tough race. I had an injury but to me it’s always your fight and giving your all and leaving it all on the track,” he told reporters, adding that he had “huge respect” for the rest of the field.

“I hope, looking back, I’ll feel proud of that, even though I prefer to take a medal. That is what I work for and gives me satisfaction.”

American Trevor Bassitt just barely edged Wilfried Happio for the bronze in his first outdoor championships, catching up to the Frenchman in the final metres before sticking his head across the finish line at the right moment to secure a personal best time of 47.39 seconds.

Australian Eleanor Patterson picked the perfect time to produce her lifetime best leap as she equalled the Oceania record of 2.02m to win a surprise world championship high jump gold on Tuesday.

Patterson failed twice at 1.98m, once at her previous best of 2m but cleared 2.02m at the first attempt, lifting her from fourth place to first.

As her rivals then faltered it proved enough to earn gold on countback ahead of Ukrainian favourite Yaroslava Mahuchikh, who needed two tries to get over the same height before both athletes failed to clear 2.04m. Reuters/DM