A funny thing happened on the way to the intersection -... 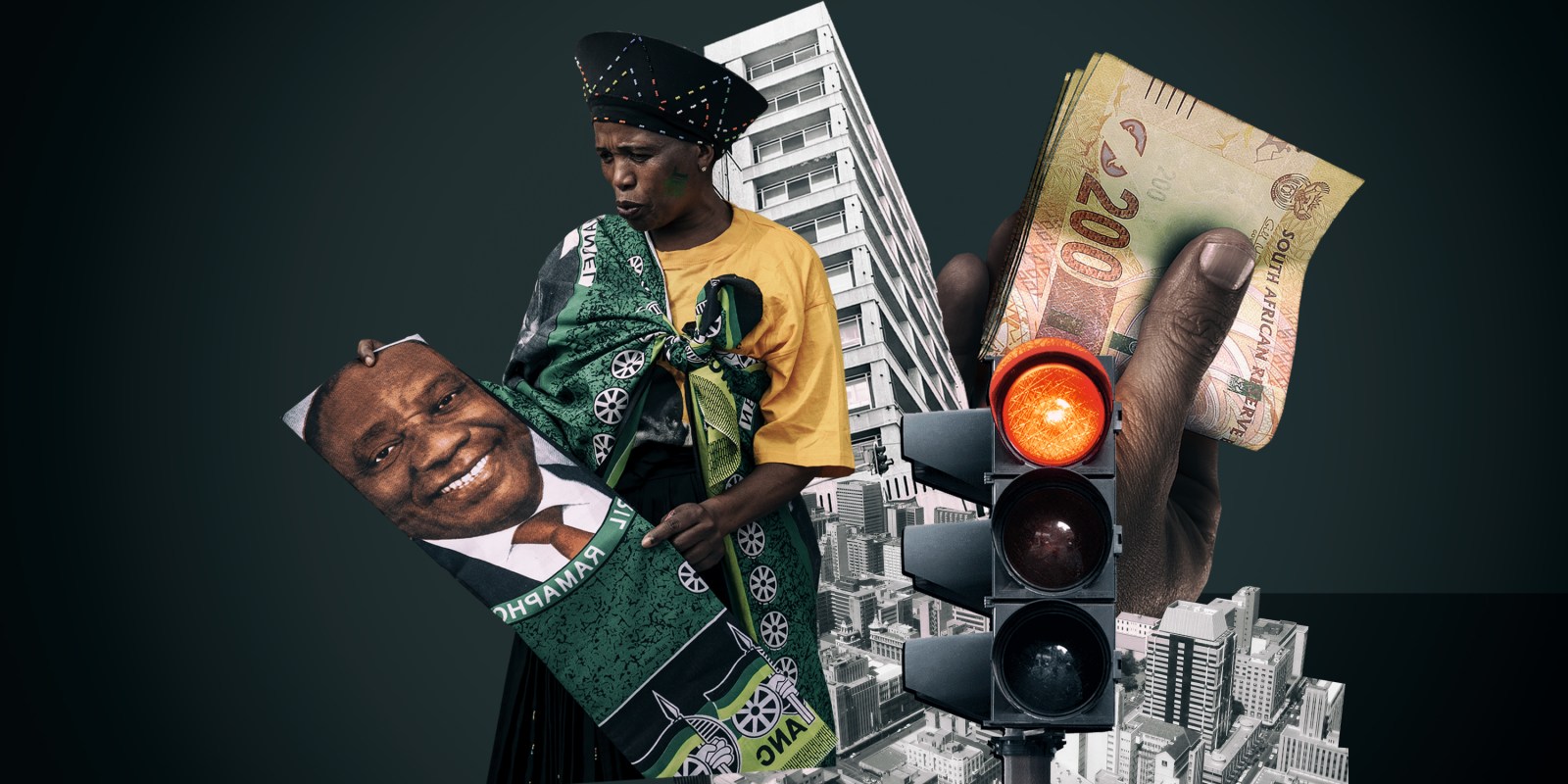 Illustrative image | Sources: One of the thousands of ANC supporters buys a wrap with the president's face as she prepares to listen to President Cyril Ramaphosa during an election rally in Alexandra, Johannesburg, South Africa, 11 April 2019. (Photo: EPA-EFE / Kim Ludbrook) | Flickr | pngtree | Adobe Stock

Thanks to rolling blackouts, not a single traffic light was working during my 20-minute drive through Johannesburg’s busy northern suburbs to my sons’ school last week. The city’s inescapable emblem of state failure: dead robots.

ANC misgovernance has produced South Africa’s worst energy crisis. If only that were all.

Murders are soaring. Across society, hopelessness abounds. Even my pollyannaish neighbours say that the country is now on the brink. Of what, though? Everywhere, minds race.

In 2016, I chaired a series of roundtables comprising some of the country’s sharpest economists, social scientists and journalists, who had written extensively on South Africa’s governance crisis. Allowing it to deepen, everyone agreed, would risk permanent social and economic harm.

Worthy ideas to get South Africa back on track were aired. Nothing came of them.

Similar projects by others to renew the country’s promise fared no better. Try though they must, exponents of the current incarnation are running against history.

Perhaps our endless stress on things for government “to do” was misplaced. Even if magically free of corruption, a state crippled by incapacity and inefficiency can’t “do” very much.

Less complicated, but more useful, would have been management guru Jim Collins’ advice. Rather than do more, firms in trouble should stop doing unproductive stuff.

Cadre deployment, bailing out unviable state-owned enterprises – where might South Africa find itself today if President Cyril Ramaphosa’s lodestar had been a “stop doing” list? Far from perfect, but still, probably better.

Not grappling with the nature of the beast strikes me as another flaw of past initiatives.

There is always an emphasis on building market-friendly administrations through various means (e.g. privatisation, deregulation) and the establishment or shoring up of transparent and neutral bodies to meet public needs. Things like political culture get short shrift.

States might respond to such advice by creating strategies and even new government units to execute them. If nothing changes, development economists say, typically it’s because the new plans were only “signals” to garner short-term support from one constituency or another.

Their formal adoption makes the government look better – but that’s it. Policies are rarely implemented, or not implemented deeply enough.

Signalling eventually became routine in South Africa. To whom? The private sector, foreign partners, itself… it’s not clear.

All the while, the structures, incentives and power relationships which wielded such malign influence on governance operated behind party walls. To borrow from Reinhold Niebuhr, they took for themselves whatever their power could command.

Our collective bafflement that so many incompetents and charlatans rose to high office suggests that we never quite understood – or accepted – how the beast worked.

We should have known better.

Within the ANC – not unlike other liberation movements turned ruling parties – the ethos of entitlement has become fixed into its hardwiring.

Evidence that it still governs in the national interest is scant. Immobilised by the scale of their own mess, some ministers have retreated into the bunker, brooding on how not to end.

The former head of the SA Post Office recently pleaded for 100 of our “best people” to be appointed to “fix the country”. Radical proposals make for good headlines in South Africa – but go no further.

Imagine if the World Bank – or any global body – could report that South Africa’s “transformation has been remarkable. That the lights are on, the streets are safe and public services are corruption-free”.

This is exactly what the bank wrote of Georgia in 2012, following years of intensive reforms driven by then president Mikheil Saakashvili.

Lest there be any confusion about what “radical” reform means – and there shouldn’t be in South Africa, of all places – one of Saakashvili’s corruption-busting moves is worth citing for clarity: during his first year in office, he fired 90% of Georgia’s traffic police. Initially, he wanted to improve the notoriously thuggish force. Within months, he concluded that it was unsalvageable. About 30,000 policemen lost their jobs overnight.

Then, a funny thing happened. Most Georgians felt that their now-unpoliced streets had suddenly become safer and more orderly.

One bold reform emboldened the next. Corrupt institutions were eliminated; new ones were created. Incentives changed.

Saakashvili left office in 2013. His legacy is not uncontested: he was later stripped of his citizenship (it’s a long story). And Georgia is no utopia.

Yet even his detractors concede that his robust use of executive power rescued the country. Harnessing popular support, he took a dysfunctional ex-Soviet state and transformed it into the region’s most efficient and accountable one.

“If leading Georgia taught me one thing” about tackling corruption, Saaskashvili reflected, “it’s that half-measures don’t work. Those who benefit from the status quo will always abhor change … when the moment is ripe, why accept incremental progress when you can seize the opportunity for real transformation?”

That moment may have passed for South Africa’s president. His once vast reserves of public support are receding. No longer is it enough that he is simply better than his venal predecessor.

Jacob Zuma’s legacy – in which Ramaphosa played no small part, as his deputy – was awful. But critics say that the president can’t unshackle himself from the ANC’s ideological straitjacket and do what’s needed to reverse the damage, restore hope and rebuild the economy.

Seemingly so barren are the alternatives, however, that he remains South Africa’s favourite politician. For now, the nation still tilts towards Cyril.

Good luck to civil society platforms like The Rivonia Circle and Defend Our Democracy. Their campaigns for fresh ideas and a new kind of politics reflect growing sentiment. And their founders are wise to reify the Constitution in their mission and advocacy.

Like an army defending a besieged castle, the Constitution thwarted regular attacks from Zuma’s mercenaries and continues to hold firm. It is not the only institution that held up well during the “lost decade”. The judiciary, central bank, media – all praiseworthy. But it’s the most important.

The success of these platforms turns on a question that I might have asked myself at an intersection that morning, observing how well Joburg’s drivers have collectively self-regulated through a broken system.

It is, in a way, the same question that Saaskashvili contemplated before he fired the police force, unsure what would happen on Tbilisi’s streets once people realised they had become the law.

How strong is the glue that holds society together?

This glue is often referred to as social capital: shared norms, values and vision; general connectedness and cohesion; trust and belonging. It helps to facilitate cooperation and collective action for mutual gain. Hard to measure but vital to any successful state. Studies suggest that it is lower in highly unequal societies.

Social capital is an essential ingredient for building a new politics. It helps make those stateless intersections run smoothly.

But it’s worth remembering that most South Africans still can’t afford a car. DM

Dr Terence McNamee is a Global Fellow of the Africa Program at the Wilson Center (Washington, DC).