Framing gender-based violence as a ‘crisis’ will no... 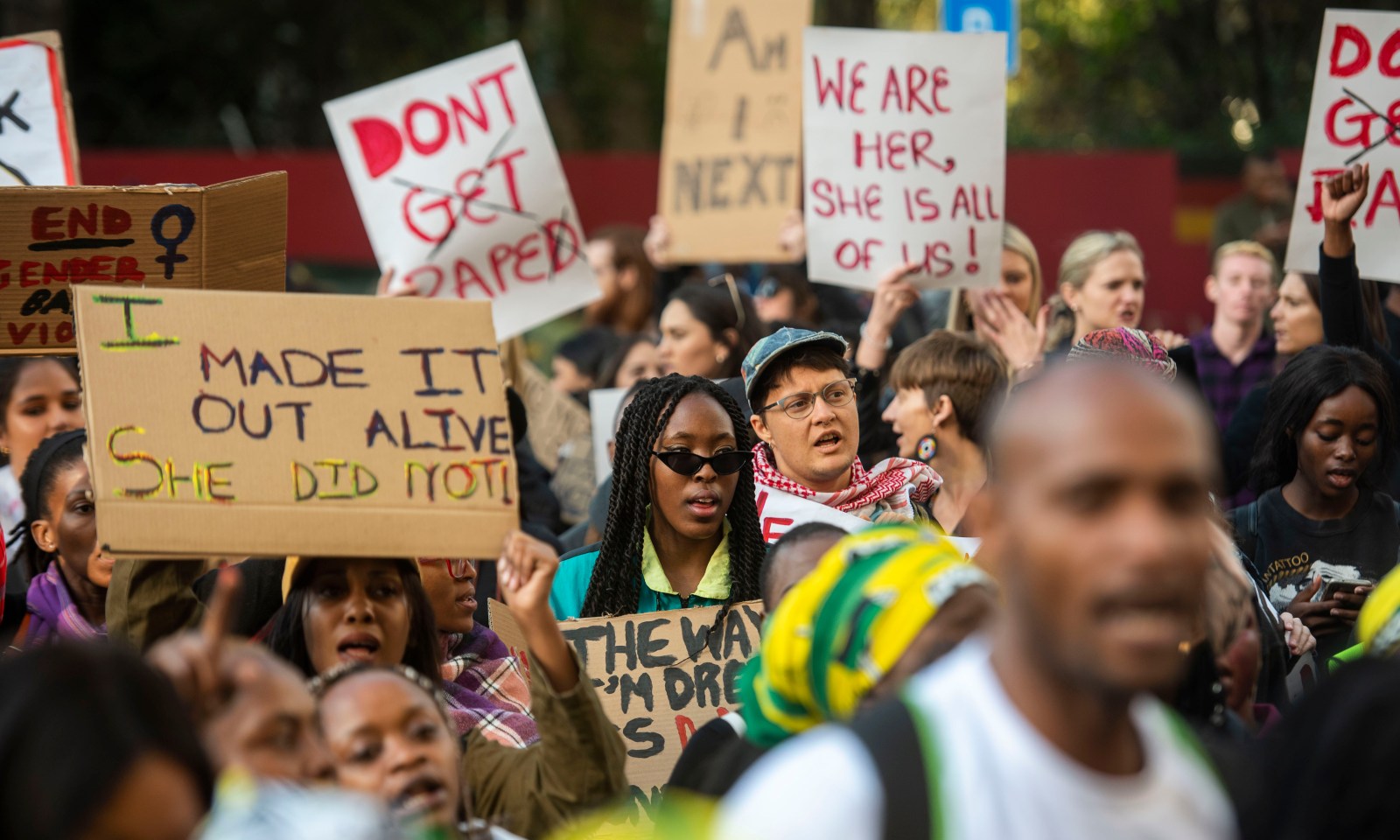 Protesters march against gender-based violence, organised by several NGOs and organisations at the JSE in Sandton on September 13, 2019 in Sandton, South Africa. (Photo by Gallo Images/Alet Pretorius)

South Africans need to frame the problem as an endemic social condition that they can stop through deliberate action.

Researchers and journalists in South Africa tend to portray sexual violence as an ever-worsening crisis, focusing on either the latest police statistics or the most violent and horrific recent incidents. Since the late 1970s, the media has displayed a near obsession with reporting rape numbers and gruesome case details.

The framing of violence against women as a ‘crisis’ isn’t new. Newspapers declared that South Africa was in a state of ‘rape crisis’ as early as 1979.

Despite significant changes in legal and institutional responses to violence against women since the apartheid era — notably new systems to respond to cases — media coverage largely remains unchanged. Articles and research papers often open with a description of violence against women as a ‘crisis’ and South Africa as the ‘rape capital’ of the world.

This framing of gender-based violence contributes to beliefs that the problem is perpetually escalating and growing ever more extreme. Such language fosters collective amnesia about South Africa’s long history of violence against women across racial and class groups.

The murder of women and gang rape are also not new or distinctly post-apartheid problems. Both have been documented for decades. In 1981, Soweto author Miriam Tlali wrote in the Rand Daily Mail that “virtually all black women, from small children to grandmothers and great-grandmothers, live in perpetual fear and are haunted by the lurking shadow of possible personal defilement.”

Talking about this violence as a ‘crisis’ doesn’t encourage solutions that address it as an endemic social problem. It also presents incidents as episodes rather than daily occurrences fomented in regular interactions, institutions and language.

Efforts to address violence against women aren’t new to the post-apartheid era either. Since the 1970s, feminist activists and community leaders have been challenging rape myths through public education and demanding changes in how the police, doctors and courts treat victims.

Recently the National Strategic Plan on Gender-Based Violence and Femicide, and the White Paper on Safety and Security, reiterated the importance of preventing violence against women. Yet governments and communities rarely give the effort their full support, and each year we’re told that the ‘crisis’ is deepening.

Many argue that a history of state-sanctioned violence, poverty, socio-economic inequality and gender disparities underpinned by a highly patriarchal society explain the country’s high violence rates. Perhaps these structural drivers have made it difficult for violence prevention to gain traction. South Africans simply cannot see a different reality from the one that dominates their lives.

The loudest calls, mostly in the wake of horrific femicide or rape cases, have been for harsher sentencing — or even the death penalty. There haven’t been enough appeals to reflect on why violence persists and what systems and societal structures make women vulnerable.

This is understandable considering feelings of anger and frustration at a problem that seems out of control. We also know that politicians favour ‘quick fixes’ and play to citizens’ calls for retribution and hiring more police. But to turn the tide, a different conversation is needed. Journalists and researchers are fundamental to the task of moving away from presenting violence against women as a crisis that can’t be stopped.

The popular media — newspapers, radio and television — frame and interpret events in society. When another woman is raped or killed, we turn to the news and media commentary to help make sense of otherwise bewildering events. Researchers and those designing interventions also shape our understanding of social problems in their choice of what to study, how and where to study it.

So what do we need? Journalists and researchers can promote conceptions of violence against women as a social problem, produced by choices made by corporations, governments, politicians, faith-based organisations and individual South Africans. It is not a crisis out of our control but a social condition that can be interrupted through deliberate efforts.

A recent South African Medical Research Council brief on femicide shows that numbers dropped between 1999 and 2017. This resulted from activism and changed government policies and measures to reduce violence against women, and indicates that concerted actions can prevent harm.

Putting violent men in prison won’t stop the problem. In fact, as former Judge Edwin Cameron has suggested, the boundaries between prison and society are so porous that increasing the prison population is likely to lead to more violence.

Journalists and researchers must continuously draw attention to how society creates conditions that encourage violence. For example, the South African economy produces racialised inequality, limits autonomy, hamstrings the abilities of individuals and communities and castigates the poor for being trapped in poverty. The consequence is endemic individual and inter-group violence.

We need to question South Africa’s development trajectory that centres on state-driven economic growth, not human wellbeing. Some of the billions spent on bailing out bankrupt state-owned enterprises would be better used to fund community-based organisations or shelters that reduce vulnerability to violence.

To change how we understand violence perpetrated against women in South Africa, we need to reflect on how we speak about it. DM