Queuing at dawn renders little or no service at Belvill... 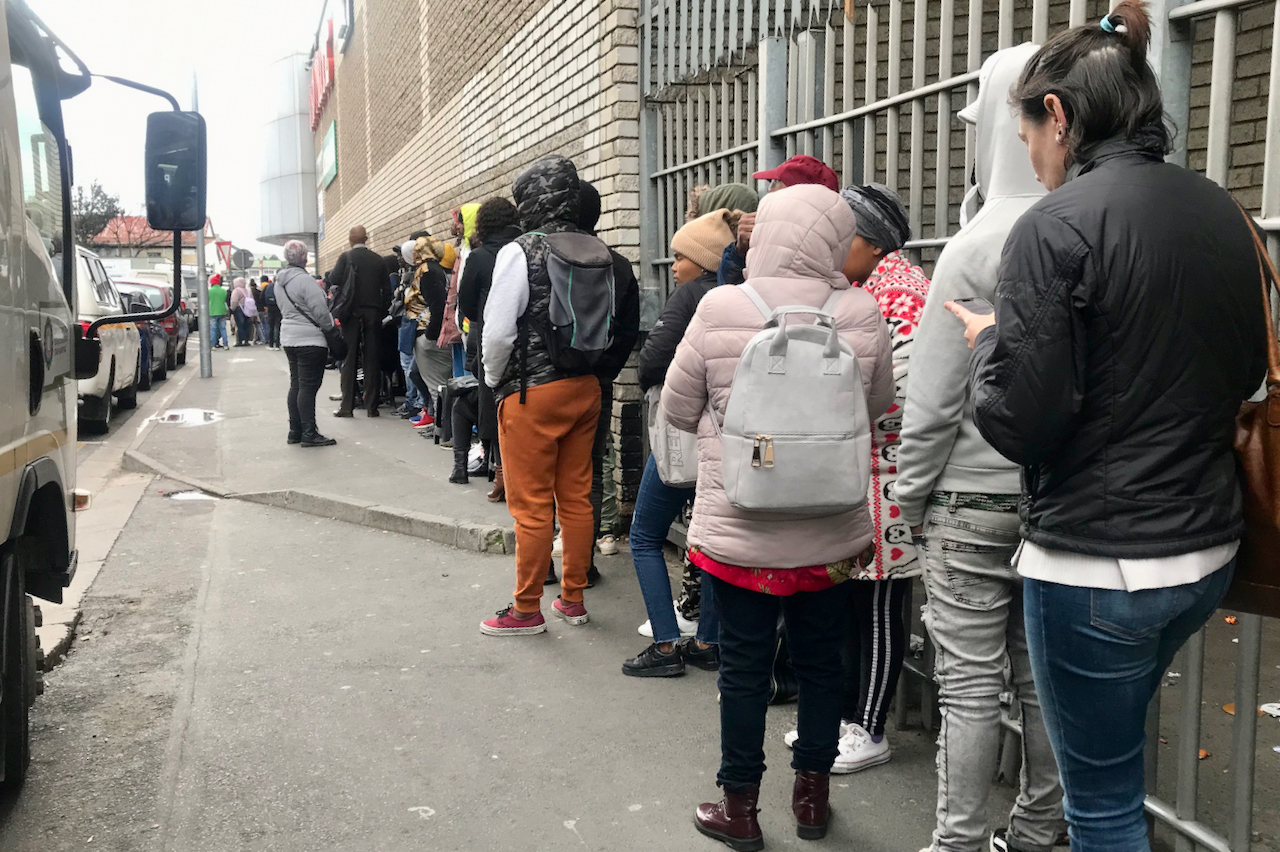 People start to queue outside the Department of Employment and Labour at Middestad Mall in Bellville from the early hours. Many still do not get served. (Photo: Tariro Washinyira)

Citizens queuing from the early hours of the morning are frequently turned away without assistance or stonewalled, UIF recipients complain.

Queues form early outside the Department of Employment and Labour offices at Middestad Mall in Bellville. The office opens at 7:30am and closes at 4pm, but there are people who still don’t get served even when they have arrived early in the morning.

When GroundUp arrived at 8am on Wednesday, the queue outside was already long, and it was cold and drizzling. Most people in it were there to apply for their Unemployment Insurance Fund (UIF) money. They got up in the dark, spent money they can hardly afford on transport and wasted hours of their day waiting to be served. Many have to make several trips before they are either served or their UIF payment processed.

There is no help desk, nobody to quickly check and vet forms so that people don’t wait for nothing, no effective queue management and no consideration for people who are elderly, pregnant or otherwise unable to stand outside. The clerks inside appear to be extremely slow, processing no more than 40 people a day it seems. We asked specifically how many people are served at the Bellville office per day, but this and other questions were ignored.

People in the queue told us about ten people had been let inside by 8am. They were the ones who had slept outside to be first. It was over an hour before more people were let in.

Although officials give a cursory look at forms and give people a ticket number, there was no proper queue management and people complained about queue jumpers.

At around 10am, a security guard informed everyone there would be rolling blackouts shortly.

A woman, who gave her name as Jennifer, said this was her third attempt at this office. She was heavily pregnant and had hired a stool for R3 so she could sit while she waited.

“Three weeks ago I hired a car from Delft, arrived at 5am, and the queue was already long. I waited in the queue till 2pm and did not receive service. I hired a car again and returned the following day but did not manage to get inside the offices. I then returned today using a taxi and arrived at 6am. I hope the situation has improved.”

When Jennifer finally reached the front of the queue at 2:30pm, an official told them they would not be serving any more people because there were only three people working inside. Nonetheless, she waited around, hopeful. At 4pm she gave up and left empty-handed.

In all, on that Wednesday, GroundUp counted that about 40 people had been served by the labour department office by the time it closed. We estimated that there were about 100 people queueing throughout the day.

Marciano Peterson, a truck driver who was there to arrange his UIF, came from Kraaifontein and arrived at 4am on Wednesday. He got ticket number 17. He was hopeful he would be served. He said that he had first tried on Monday and arrived at 5am. Officials started checking documents at 7:30am and let in about 20 people ahead of him. His group was only served around noon. The official serving him said his employer had left out a date and he must take the forms back.

“Any small thing they send you away,” said Irshaad Ahmad, who had come from Kuils River and been dropped off by a relative at 4:30am in the pitch dark. “We must sacrifice our safety, time and money … You must wake up at 3am. Such a big sacrifice for a simple service — if the process was well managed.”

“They work very slowly. The first time I came here last week I was standing there in the queue close to Pick n Pay. The queue was not moving at all. At 2:30pm they announced they were not going to take any more people. That day they only took 40, the first 20 and a second group.”

GroundUp sent questions to the Department of Labour and Employment spokesperson Teboho Thejane on Wednesday afternoon. A response will be added when it is received from the provincial head. DM