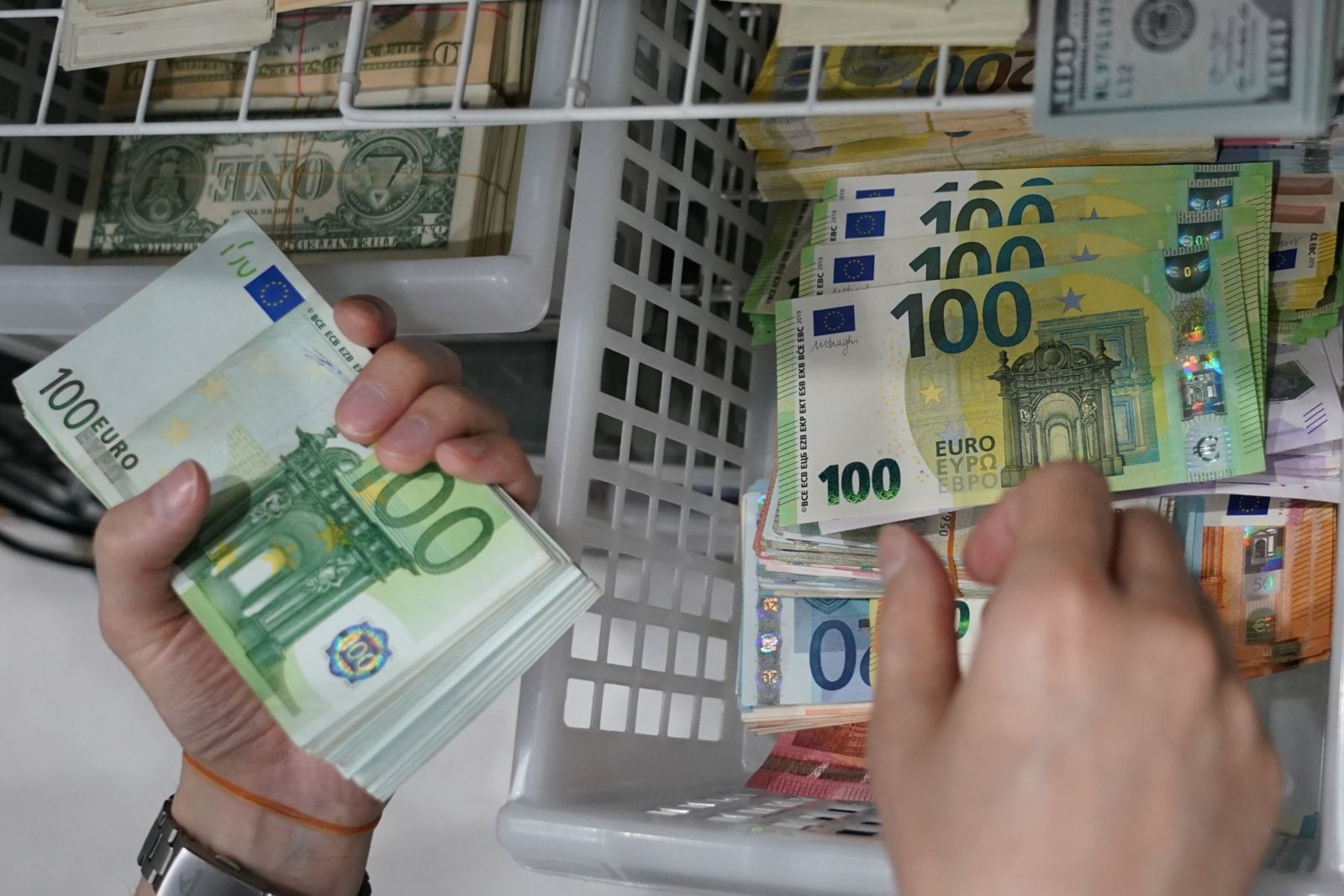 An employee holds a bundle of 100 euro banknotes at the Ninja Money Exchange, operated by Interbank HD, in the Shinjuku district of Tokyo, Japan, on Thursday, 9 June 2022. (Photo: Toru Hanai/Bloomberg)

The good news is that 59% of respondents said they don’t expect a debt crisis in the euro zone in the next six months. And the majority sees a gas cutoff as the most likely catalyst should things go awry. Only 18% cited an underwhelming anti-fragmentation tool from the ECB as the proximate cause for any debt crisis.

The European Central Bank’s battle to restore its credibility with financial markets just got a whole lot harder.

After a week marked by a fresh crisis in Rome, MLIV readers warn Italian debt risks hitting the danger zone once more – just as a near-imminent recession intensifies the epic plunge in the euro to once-unthinkable levels.

Just 16% of 792 respondents in the latest Pulse survey say Europe will likely manage to dodge an economic downturn over the next six months, with 69% betting that the single currency will slide to $0.9 rather than claw back to $1.1.

To make matters worse, the political storm in the euro area’s third-largest economy may spur a new era of market fragmentation. Some 21% of MLIV readers say the spread between 10-year Italian and German bonds would have to blow out to more than 500 basis points – the highest since the 2012 debt crisis – before the ECB steps in.

All told, 41% of respondents, which include portfolio managers and retail traders, see a debt crisis within the next six months – a massive shift from the era of negative yields that engulfed the region as recently as early January.

These warnings couldn’t come at a worse time for the ECB. It looks poised to raise interest rates this week at long last – just as Russia threatens to escalate the energy crisis with inflation already at records.

“I think expectations of a recession have ramped up quite quickly on the possibility of gas rationing, and if that plays out, you could see a lot of companies go to the wall,” said Craig Inches, head of rates and cash at Royal London Asset Management.

Elevated price pressures have taken a big toll on households and companies. Now fears are rising over a full-scale halt in Russian gas shipments once maintenance on a major pipeline finishes around July 21. It’s the same day the ECB is seen raising rates for the first time in more than a decade, while potentially unveiling a novel policy tool to fix the growing cracks in the bond market.

The central bank was forced last month to pledge a new backstop after the yield on Italy’s 10-year debt rocketed above 4%. With Prime Minister Mario Draghi’s ruling coalition in tatters, the challenge for monetary officials is only getting harder.

“If the political situation turns hostile and Italy’s new government can’t agree on a path forward with the European Commission, the ECB cannot realistically be expected to intervene,” according to Bloomberg Economics. “Given it will still have to tackle inflation, the result would be fragmentation – and potentially a crisis.”

ECB president Christine Lagarde has indicated that the backstop would be deployed if borrowing costs for weaker nations rise too far or too fast and would entail further bond purchases. Economists surveyed by Bloomberg expect the liquidity those purchases create to be reabsorbed in a process called sterilisation.

In reality the crisis tool is designed as a bluff – a signal that the monetary authority will do whatever it takes to backstop the single-currency bloc, resulting in a situation where it doesn’t actually need to purchase any bonds.

Nearly half of MLIV respondents see the ECB intervening once Italy’s yield premium over Germany reaches 450 basis points or more – way beyond the 250 basis point threshold cited by analysts earlier this year.

The good news is that 59% of respondents said they don’t expect a debt crisis in the euro zone in the next six months. And the majority sees a gas cutoff as the most likely catalyst should things go awry. Only 18% cited an underwhelming anti-fragmentation tool from the ECB as the proximate cause for any debt crisis.

But Russia’s energy giant Gazprom PJSC, which already slashed supplies through the Nord Stream pipeline to just 40% of its capacity, has hinted at further export disruptions. In turn, investor confidence in Germany’s economy has slumped to the lowest since 2011, with Deutsche Bank AG projecting Europe’s largest economy will contract 1% in 2023.

Three fifths of respondents see the ECB pausing rate hikes in the dire event Russia switches off its gas supplies. That offers some comfort that Lagarde and colleagues would avoid exacerbating an economic downturn in the event of such an energy shock.

Whatever happens, the euro’s bout of historic pain is set to endure. Strategists at Nomura Holdings, UBS Group AG and BCA Research see it plunging as low as $0.90 by the winter in a worst-case scenario, reflecting the view of most MLIV readers that a slump is more likely than a recovery.

All that suggests this year’s stock volatility is set to continue, with Pulse respondents saying that the vehicle and real estate sectors are the least likely to outperform over the next six months. Readers also reckon the banking sector is unlikely to beat the benchmark – perhaps with one eye on the growing risk of corporate defaults and a region-wide credit crunch. BM