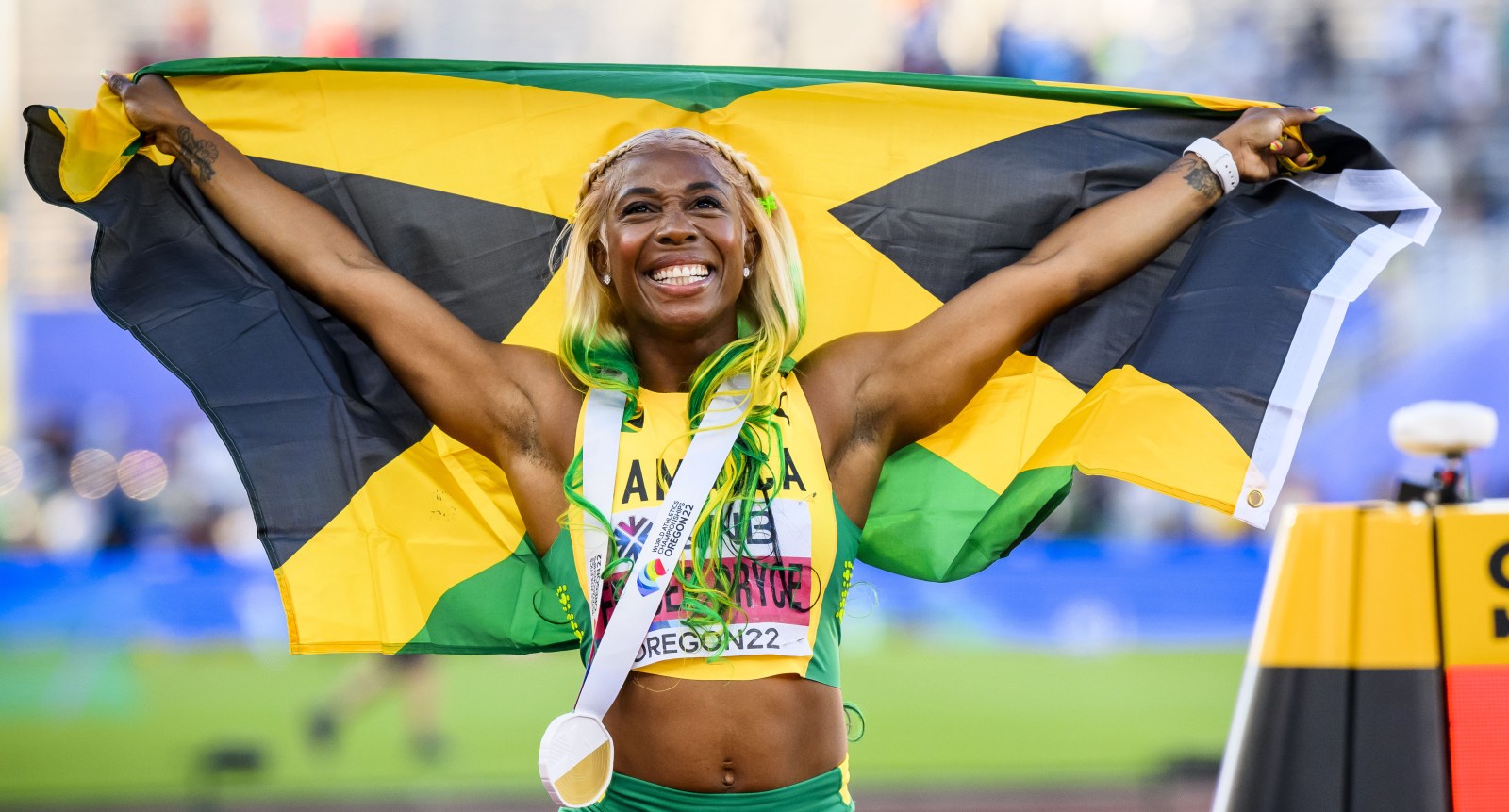 Day four of the World Athletics Championships produced a familiar winner in the women’s 100m.

Shelly-Ann Fraser-Pryce claimed an astonishing fifth world 100m title at the age of 35 on Sunday when she clocked 10.67 seconds to edge Shericka Jackson and Elaine Thompson-Herah in a brilliant Jamaican clean sweep.

Fraser-Pryce got her usual superb start and held her form as fast-finishing Jackson clocked a personal best 10.73 for silver and Thompson-Herah took bronze with 10.81.

No nation had completed a medal sweep in the women’s 100m at the worlds, though Jamaica did it at 2021’s Olympics via the same three athletes – and also in 2008.

The US did the same in the men’s event on Saturday, the first since 1991.

Fraser-Pryce now has five 100m world titles and two Olympic 100m golds and shows absolutely no signs of slowing down as Sunday’s mark was the fastest winning time of all those seven global victories.

“Whenever I’m healthy I’m going to compete. I’m hungry, I’m driven and I always believe I can run faster and I’m not going to stop until I stop believing that.”

She hoped that she could be an inspiration to other women.

“It’s not easy, I don’t just turn up – I have to work,” she said. “I can’t even imagine the amount of times I’ve had setbacks and I’ve bounced back and I’m here again. To continue to do it at 35, having a baby, still going, hopefully I’m inspiring women that they can make their own journey.”

Jackson said she was surprised to learn she is now the third-fastest Jamaican of all time.

“Last year when I switched to the 100m I was scared, but I took my time and here I am today and I feel good to be part of history with the sweep.”

Thompson-Herah, who has won back-to-back Olympic sprint doubles and is second-fastest on the all-time list behind only Florence Griffith-Joyner, is still without an individual world title, adding Sunday’s bronze to a 200m silver in 2015.

“I’m not in the best shape of my life, I’ve had shoulder and Achilles injuries that have knocked me about a bit, so I’m pleased to have overcome that,” she said.

“I’m a fighter, I’m always positive and my world championship journey does not stop here.”

Dina Asher-Smith, a silver medallist in 2019, was fastest out of the blocks in lane eight, but though she matched her British record of 10.83, she came up just short.

Her teammate, Daryll Neita, ran the fastest time yet by someone not making the final (10.97) in the semis.

Tokyo silver medallist Holloway opened up a lead from the 10m mark and came home in 13.03 seconds, ahead of compatriot Trey Cunningham and Spain’s Asier Martínez.

“At the start, it was just me, my lane and my space and I was ready for whatever happens,” said Holloway. “We have to continue the hard work and we will see what happens next. It feels good to win in front of the home crowd.”

Uganda’s world record holder Joshua Cheptegei showed he had learnt his Olympic lesson as he delivered a tactical masterclass to win a second successive world 10,000m gold in a superb race on Sunday.

In Tokyo in 2021, Cheptegei kept his powder dry until the bell, only to be outkicked by Selemon Barega. On Sunday he started upping the ante with more than 1km to go, throwing in laps of 64 and 63 seconds to stretch a group of eight as they hit the bell.

He then continued to press and though there was a mad scramble behind him that had the healthy Hayward Field crowd roaring in appreciation, he was strong enough to hold the field off and come home in 27:27.43 minutes.

Kenya’s Stanley Mburu, who took a heavy fall on the first lap, recovered well to finish second in 27:27.90. Jacob Kiplimo (21) who was third in Tokyo, claimed another bronze for Uganda in 27:27.97.

Nageotte cleared 4.85m on her first attempt to win her first medal at the worlds, while Morris had to settle for a third straight silver after clearing the same height, but on her second attempt.

The last American to win gold in the event was Stacy Dragila at the 2011 Edmonton worlds.

It was the third straight gold for the American women in the field events in Eugene, Oregon, after Chase Ealey won the shot put and Brooke Andersen triumphed in the hammer throw. Reuters/DM